Omens, omens, omens.  Baseball fans are always looking for omens, so when it took 19 minutes to drive from Randy's house in Oakland to the parking lot ($70!) in San Francisco - besting by one minute our trip (a trip that in the Bay Area should of course take much longer) to Game Two of the National League Championship Series, that seemed propitious (to use an oft used word from this post about that wonderful NLCS).

Then there was the homeless guy outside the K&L on Fourth Street - the guy in desperate need of a light, lights being hard to come by in our increasingly impolite age (especially if you're a ragged soul asking for help).  I usually have a light, and this time it was the Zippo I scored during my first trip to Vegas - Vegas for Dean's Bachelor Party, and wow, I'd tell you if I could, but what happens in Vegas...

So my ability to light the guy's smoke also seemed propitious, because - well, again, when you're looking for omens, you see them everywhere.  Since the San Francisco Giants were about to face Justin Verlander of the Detroit Tigers, I needed to see omens.

Good ones - not like the decapitated pigeon that fell out of the sky yesterday and splattered the sidewalk outside the bookstore.  What the hell was that about?  Not a particularly good omen - so we'll leave it be, return to Wednesday night, when I needed good omens because of Mr. Justin Verlander.

Verlander is a machine - the best pitcher in baseball.  Last year he won the Cy Young Award and was named his league's Most Valuable Player.  Facing him?  Facing the best in Game One of the World Series?  It was like 2010 déjà vu all over again - 2010 when the Giants were going against the Texas Rangers, were going against their ace, Cliff Lee.  Cliff Lee who had allowed opponents to hit .075 against him in that year's postseason.

Verlander had an even gaudier number of his own - his ERA for the postseason had been .074.

Omens, omens, where are the omens?


When we walked into the park, after climbing the steps into the stadium, we passed a table with two young women asking for help during the fifth inning.  Major League Baseball had teamed up with standup2cancer.org, and in the fifth inning, fans were being asked to hold up placards with the name of the person in your life who'd been affected by cancer.

I had taken a few steps past the table when I realized they weren't hawking credit cards - so I turned around, immediately losing Randy and Rob in the crush of orange and black fans, and asked if I could have a sign.  I put my phone down and, after the line on the sign that read- I STAND UP FOR - of course I scribbled the words MY DAD. 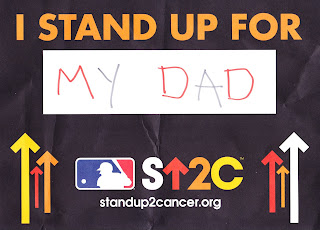 Then I re-entered the fray, trying to squeeze through the masses to our seats.

I'd already passed two beer vendors and a hot-dog stand when I realized I didn't have my phone.  Pant pocket?  Nope.  Pea coat pocket?  No again.

I must've left it on the table when I'd filled out the placard.  I turned, a salmon fighting upstream through this river of orange and black going the other way - swim surge leap - and when I got back to the table, I saw one of the young women was talking on my phone.  To my mom. 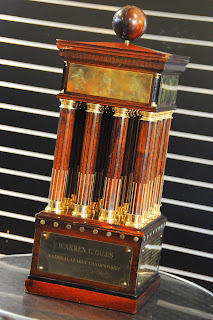 Oh, here, she said, as she handed the phone back.  Please tell your mom it's ok!

I'm forty-six, and there I was, explaining to my mom that it was ok.

Still, that's a good omen, right?  I mean, I found my phone, right?

What, did you think I forgot about the omens?  Not on your life.

On my way back through the orange ebbs and black flows of my baseball brethren, I saw the trophy - the trophy that indicated the Giants win the pennant! 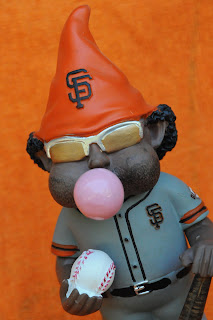 Next to the trophy was another table, this time with employees hawking Giants merchandise from the 2012 season.  On display was the Pablo Sandoval Garden Gnome.  The one where Pablo is blowing one of his trademark pink bubbles.


How could I not?

And - little did I know - this was another good omen.

A World Series game is a little bit of Fall magic only available to the lucky two teams that have weathered 162 games in the regular season and then made enough luck to reach, in late October, the culmination of this journey that started in February when pitchers and catchers reported for Spring Training.

February 18th for the Giants.

February 19th for the Tigers.

Now, though, it's late October.  AT&T is always sold out, but it feels like there are more people in the park - it's just a crush of orange and black.

How can it feel like there are more fans where there are the same amount of fans every game?

A World Series brings out a good mood in everyone - and everyone's decked out in their Giants' finery.  The stadium's wearing its best duds, too, with Red, White, and Blue bunting draped everywhere. 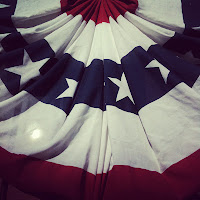 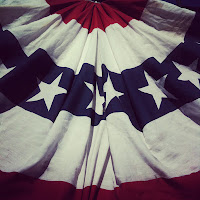 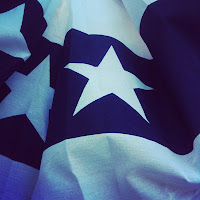 The beer's colder, the cheers are louder, the hot dogs are hotter - and for the Tigers or the Giants, the greatest achievement any baseball team can muster is just around the corner.

Before I could finish my first Heineken - Heineken because, as Randy pointed out, they serve 'em in those tall, aluminum bottles, and that green aluminum keeps the beer colder than plastic.

Feels that way, at least.

But before I can finish Beer #1, just after Barry Zito had wiggled out of trouble in the top of the first when he had allowed two Tigers to pace around his infield like hungry jungle cats, Pablo Sandoval faced Justin Verlander in a quick - up until then - bottom of the first.  Quick because Pablo's two teammates had grounded out at the hands of the invincible Mr. Verlander.

The pace of the inning, the pace of the game, changed forever when Pablo Sandoval - staring down a count of no-balls and two-strikes - swung his massive body and struck at a high and outside 95 mph fastball that no one should have been able to touch.

But he did - introduced ball to bat - and after the introductions were concluded, the ball sailed over the center field wall on its way to Oakland.

Justin Verlander?  On 0-2 counts this years?  Had given up exactly 0 home runs.

In the park, we sang bye, bye, baby - and a loud crowd got even louder.

You can hear the national television announcers talking about AT&T being the loudest park in the majors, I can listen to Margie tell me that as she drove past the park on Monday night during the seventh and deciding game of the League Championship Series she was struck by the fact that she couldn't hear her car radio because of the din emanating from the ball yard - but when you're in it?  Adding your voice to the cacophony?

And then in the third, when Angel Pagan hit a routine grounder to third - only then it became anything but routine as it hit the bag and scuttled into left field, allowing Pagan to turn a sure out into a double - and when I told Randy that we'd just witnessed this Series' Hunter Pence moment, Randy reminded me that he said if Pagan reached base, he'd be sure to score.

So - we began the Marco Scutaro chant.  It was quiet at first - just me shouting Marco and Randy laughing out a Scutaro.  But then it was another Marco followed by three voices saying Scutaro.

And then Marco, and then eight yelling Scutaro.  And, very very soon, AT&T was throatily chanting

And just like that, Mr. Scutaro swung and singled and scored Mr. Pagan - bringing up Pablo Sandoval for the second time.

﻿﻿﻿
In the middle of that at bat, the Tiger's pitching coach - Jeff Jones - visited the mound to talk to Mr. Verlander.  While Mr. Verlander only said, What are you doing here? his stare said so much more.  That stare held such condescension (and, truth be told, confusion - if it's possible to display both, and I'm here to tell you it is) because Pitching Coaches do not stroll to the mound to shoot the breeze with Mr. Verlander.  But - after Mr. Jones had retreated back to his dugout and we watched the next pitch, watched as Mr. Sandoval hit his second home run off of Mr. Verlander in as many tries, watched as the big screen showed Mr. Verlander mouthing the word Wow as he, too, watched the flight of the ball over the fence in left - his stare made that moment all the greater.

Clearly, we - Randy and I, Rich and Rob - were in for something special - and I looked inside the white plastic bag that held my bubble-blowing gnome and wondered, hmmm....

And then it's the fifth and I'm on my feet holding a sign indicating that I'm standing up for MY DAD, when I look to my left at Randy and see him holding up his own sign with my dad's name on it. 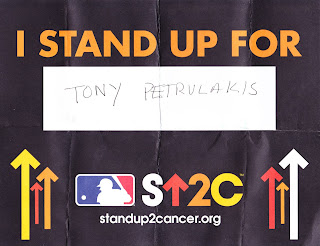 Regardless - thanks, Randy, thanks.  I thank you, and my mom?  My mom really thanks you.

Propitious?  Good omen?  You decide.  Because though the Tigers had changed pitchers, from Justin Verlander to Al Alburquerque, they couldn't change the outcome - and during his third at bat, there in the fifth, with the crowd roaring for more, Pablo Sandoval hit Home Run #3 to deep center field.

And this is how it looked.
﻿

Three home runs in one World Series Game? Albert Pujols did it last year.  Reggie Jackson did it in New York in 1977.  And Babe Ruth did it for the first of his two times in 1926.

That's it.  And that's some company Pablo Sandoval now gets to keep.

And all the while this was happening?  Something as amazing though not as majestic was also occurring - Barry Zito was pitching the game of his life.  Barry Zito, the much maligned.  Barry Zito of the ridiculous contract.  Barry Zito who, the last time the Giants were in the Series, in 2010, didn't even make the post-season roster because he was just that bad.

Barry Zito vs. Justin Verlander - and it was Mr. Zito who was throwing 0's.

Randy said that the Tigers would surely benefit from a two-run home run at some point during the proceedings - which they would do, in the ninth, when they were losing 8-1.  But for the five-plus innings that Mr. Zito pitched?  He was nearly perfect, and all sins are forgiven. 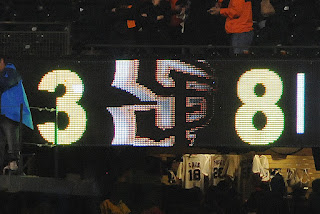 This game?  This World Series game?  It had that crazy Angel Pagan double, it had Gregor Blanco making crazy-perfect dives to rob hitters of extra bases, it had Tim Lincecum appearing as a reliever and being perfect, retiring the seven batters he faced in dominating fashion.  And it had Pablo Sandoval.

Except for that hiccup in the ninth that Randy had foretold, it pretty much was magic all night long.  The best game I've seen as an adult, without question.

Would the Giants have the momentum to win the series in this sort of splendid fashion?  Jim Leyland, manager of the Detroit Tigers, said:  I think momentum is your next day's pitcher.

And that's the kind of momentum the San Francisco Giants have been displaying because the next two games saw Giants' pitchers hurling shut-outs at the Detroit Tigers.  The Tigers, who were shut out only twice all season long - for 162 games - and then the Giants equaled that number over the course of three nights.

This is a very special Series - one that I've felt confident about since a Thursday night at Candlestick Park.  Thanks for that, Dad.  Thanks for the ticket, Randy.