Colonel Joe Rickey was a mover and shaker for the Democrats in Washington D.C. in the 1870's and '80's - making the Joe Rickey cocktail a classic of the classics.  In the midst of the Colonel's morning constitutional, he'd often find himself at Shoomaker's Bar in D.C. where his favorite barkeep, George Williamson, would serve him a bourbon and soda.  That's one way to start your day.

During one particular dawn - so the story goes - Mr. Williamson dropped half a lime in the Colonel's glass.  The Colonel enjoyed what had been created and ever after requested half a crushed lime in his bourbon.  Pretty soon, other gents would belly up to Mr. Williamson and ask for what Joe Rickey was having.  Voila!  A new drink.

While the Joe Rickey was popular, it went transcontinental when people started making it with gin instead of bourbon.  The Gin Rickey - I think I can I think I can - was a locomotive compared to Joe Rickey's freight train, so most people know the Gin Rickey but forget poor old Joe.

Not when the Giants lose - bad.  Bad two days running.  And worse the second day than the first.  When your baseball team is on the ropes, when their hopes are slim - it can put a man in a crushing mood, have I mentioned that?

The morning began with a remembrance not of things past, but of the fact that my simple syrup was getting low, necessitating that I cook up a new batch.  Made it a double so I could finally fill the Italian flask I bought for a friend.  I delivered that flask - tonight - along with a book, both for that friend.  Had asked my friend earlier where I could drop the goods and he said he'd leave his bar open for me.  So after work, after another crushing baseball loss, I laid a gift wrapped book down on a darkened bar top, then crawled under to where the small refrigerator is and placed the flask inside.

I forgot - there in the dark - that when I opened the fridge, light would spill out.  Would spill out and wash over the bottles on the mirrored shelves above me.  The Whistle Pig rye that had been hidden in the black of that shadowed bar suddenly sparked to life.

That's when I remembered my friend's words.  His words encouraging me, prodding me - almost a command, were those words.

For he had written - and I quote - "Help yourself to a drink."

How could I not, thus enjoined?  Especially when there, suddenly, where all had been black moments before, the Whistle Pig had taken center stage under the lights, practically begging Mr. DeMille for a closeup.  Dare I turn my back on a friend's entreaty?

So I took a healthy swig of the Pig.  Just one, mind you.  Just the one.

But a good one.

Emboldened, I knew I'd have another when I got home.  After a day selling books while listening to my Giants die on the ball field.

So when I got home, I'd make a Joe Rickey, a Joe Rickey because I was in the mood to rend, to crush, to destroy.  If you don't know the tragedy of bleak October baseball, you may not understand.  But try try try to understand, I'm a manic man when it comes to days like these.

Imagine my shock, then, when I got home and realized I didn't have any limes.  One over sized Key lime, yes.  But Key limes, of course, are a little more tart, a little more bitter.

That's when Nick's Rickey was born.

A more bitter fruit was just what the doctor ordered for the messed up night the Giants had delivered.  Not to mention the debacle at work yesterday - but that's another story for another day.  Suffice it to say, a bitter weekend begged for a bitter fruit. 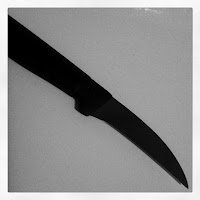 So I grabbed me a wicked little knife we keep hidden from the girls because it's so sharp, so lethal.  And with its curved blade I sliced through the Key quick and deep.  I took a highball glass - no time to chill it - and added bourbon.  Threw in two rocks, then crushed that goddamn Key lime in my fist, over the glass, and threw the whole thing in.

And that's the difference, friends - small, but crucial.  A Joe Rickey calls for a lime, neatly cut in half.  That half is squeezed with grace and tact over your glass, and then gently dropped.  Nick's Rickey?  Slice yourself a Key lime, slice it good, then crush it in your hand.  Let it fall like some wounded angel into your crystal, wipe your palm on your jeans before you bury that Key lime under more rocks and then, then?  Drown the bastard in soda.

You can add a splash of simple syrup if you'd like, if your heart isn't as black as mine is tonight.  That splash of sweet will fight with the bitter, if that's the fight you want.

Drink and repeat, because once you get a taste for cutting, you'll have to do it again. 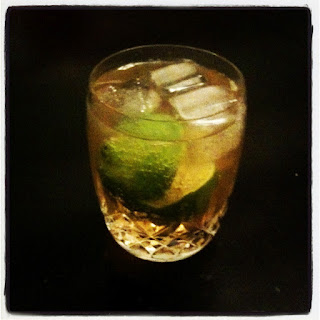