Want to know how to tell that you're not at San Francisco International Airport and are instead in the George Bush Airport in Houston, Texas?  The first words you overhear at Bush are from a gentlemen - wearing a tshirt with longhorns - asking the lady in the gift shop if she has any chew.


Want to know how to tell that you're in the buffet line aboard the Navigator of the Seas, steaming towards Honduras, and not at home?  It's when you overhear a father, wide of girth, happy and hungry, telling his teenage son, in all seriousness - I guess we could take the healthy route and go for the fried chicken.


Want to know why specificity in all things is good?  For instance, when you're trying to decide on which excursions to take, and on the Honduran island of Roatan, they're are many to choose from - they're are dolphin experiences, they're are friendly monkeys to pet, is there a zipline?  Maybe.

But when you're trying to decide, and you get all excited because your niece expresses uncharacteristic interest in the monkeys, only to have your hopes dashed because the monkeys are all sold out - so you won't be able to travel that day with your niece.  She wasn't that interested in the dolphins, alas.

And then, at dinner last night?  When you discover that indeed spaces opened up for the monkey trip, and you're talking about that, and the mom of your niece laughs, she laughs and says her daughter was indeed interested - but she was actually interested in the Monkees.

If it was the Monkees, she would be in - but White Faced monkeys?  Those kinds, not so much.

So Honduras awaits, the island awaits - with its monkeys.  Not Monkees.
Posted by Nicky P. at 10:44 AM No comments:

I don't have to show you any stinkin' badges!

Last night.  We're getting ready for our vacation, but with time slipping away, we - Karen and I - we take the easy way out and decide on Happy Meals for the kids so we don't have to do dishes.  Or, you know, cook, since we have no time to spare.

Karen's a better packer than Daddy - she's a Master Packer, like her father - so I'm elected to do the McDonald's run.

When I return from the Golden Arches, Kristina opens her Happy Meal, oohs and ahhs over the blond dolly - that night's secret toy surprise - but then she rummages, and rummages some more, before asking, crestfallen, Where's my barbecue sauce?

I get it, right?  That's a drag.  You're expecting a Diet Coke and a Regular comes to your table instead.  You order Rare, the sizzle comes all Medium.  And you're disappointed.

The kids had been great all day - excited about their trip, looking forward to seeing their cousins for a week on board the Navigator of the Seas as that ship takes us from Texas to Honduras and points beyond.  But Kristina hides her disappointment and says, It's ok, Daddy.  I'll just eat my Nuggets.  Dry.

It was the way she squared her small shoulders before saying 'Dry' that really got me.  I told her it was ok, I'd drive back to the Arches and get her some sauce.

I wasn't happy about it, but that's what parents do sometimes, right?  It's Father's Day in just a few, so I'll go do my Father thing.


In the car, heading back over our little bridge into Oakland, I'm stewing something good.  Irritated that, when I should be selecting clothes and books for our trip, I'm instead returning to a Drive Thru to retrieve barbecue sauce.  For six nuggets.  I'm not mad at Kristina - it's not her fault - but getting steamed just the same.

I stop in front of the box and wait for the guy to ask what I want.  After he does, I explain what happened and in response only receive silence.

Then, finally, his voice says, Drive to the window.

The tone was curt, I thought, and the way he said Drive was like he was sending me to the Principal's office.

What's your story? he said when I got there.

That wasn't the most propitious of beginnings, but I again explained what happened and asked if I could have my packet of sauce.

Can I see your receipt? he says.

Join me while I head down the rabbit hole?  Just a quick trip?


I don't actually have my receipt, I say.  It's back at home, in the bag you incorrectly packed when I was here - five minutes ago.  You must remember me, right?  I ordered two Happy Meals.  From you.  I paid for them.  Money was exchanged.  Me to you.  Ring any bells?

Sir, he said, can I see your receipt?

I will admit, I was already geared, exasperated with the whole situation - so right then?  I went a little Greek.

I don't have my receipt, I said, getting loud.  It's in the bag, I said.  At home.  Being cradled by a disappointed seven-year-old who is patiently waiting for me to return with her Barbecue Sauce.  Little packet.  About yea big? and to be helpful, I held up my forefinger and thumb a few inches apart.

I'm confused, I say.  It's almost nine o'clock at night, I say.  What exactly do you think I'm doing?  Driving around all the Micky D's in the East Bay and scoring a single packet of Barbecue Sauce in order to, what?  Sell them on the freaking Barbecue Sauce Black Market?

Sir, he says, trying to remain passive in the face of my increasing anger, I need your receipt.

Why do you keep saying that? I say, and now I'm really loud.  I told you I don't have my receipt.  I told you I'm trying to rectify your mistake.  I was just here.  Five minutes ago.  You took my money.  For two freaking Happy Meals.  But I didn't get my freaking sauce.  I paid for the sauce but you didn't give it to me.  That's part of the deal, isn't it?  I order a six-nugget Happy Meal, you ask me what kind of sauce, I say Barbecue, and then you drop it in the box.  Except this time you didn't drop it in the freaking box and I'm confused, really confused - so, can you end my confusion and give me my sauce?

Sir, he begins again, there's no need to get angry.  I'm just doing my job.  You don't have to raise your voice.

You know what? I asked.  I do the Retail thing, too, but what my coworkers and I do if a customer comes to us - with a mistake of our own devising - is actually really simple.  We apologize.  First.  We say, I'm sorry.  We say, What can I do to correct our error?  But (and yes, the Greek is rising now) I haven't heard that from you, not even a whisper, so I'd like my sauce please because I have more packing to do.

Maybe, just maybe, I did not say please to this Night Manager.

When, he says, did you say this happened?

What time did you say you bought this meal?

But he's not listening.  He's scrolling on his computer.  Scrolling.

Galled with all the scrolling.

Is this it, he says as he reads from his screen, not looking at me.  Two Happy Meals?  At 8:24? About forty minutes ago?  Not five?  And in his voice he's all excited that he caught me in a lie.

Oh, I say.  I see where the problem began.  It began with you.  You're just prone to error.  Because, yes, I may have exaggerated, maybe it took me longer than five minutes to drive home with my Happy Meals only to break my daughter's heart with your incompetence, and then maybe it took longer to drive back here than the five minutes I said it took, but can I tell you something?

He just looks at me like I'm Humphrey Bogart in Treasure of the Sierra Madre and he's a Federale not accustomed to answering questions.  But I tell him anyway.

Not only can you not pack a Happy Meal to save your life, but you're terrible at math, because if that says 8:24, and it's now 8:50, that's not forty minutes.  Not even close.  Your incompetence is legion.  But really?  Really?  Have I said how confused I am?  That this all started because you didn't pack a tub of Barbecue Sauce in my daughter's Happy Meal, and I drove back to get it, to correct your error.  Your.  Error.  And you're refusing  - why?  What exactly is the problem?

Did I mention that I may have gone a little Greek?  Just a little?


I honestly don't know when Alice showed up with the Mad Hatter to pull me out of that rabbit hole, but someone did.  Pull me out.  Our national nightmare ended, somehow.

And I left, finally, with my packet of "tangy BarBeQue sauce."  To the everlasting delight of Kristina.

Happy Father's Day to me, right?

Now - that port at Galveston?  Waiting for us on Sunday?  With Belize in the Caribbean distance after that?  For the trip that Karen is packing for all of us right now?  Can't come soon enough.

A Dirty Shame in Fourth of July Creek 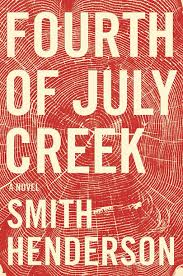 I wanted to call it the Demented Harold, after one of the many colorful characters found in the pages of Smith Henderson's novel - Fourth of July Creek - but I wasn't sure if anyone would actually drink a Demented Harold.

Besides, Henderson had already delivered the goods:  the Dirty Shame is the first of many dim bars you'll visit when you read his book - and you really need to read this book.

It's a gritty story set in a gritty place and time - Montana in the early 80's. The drink needed to reflect that, so for its name, the Dirty Shame was perfect.

You'll find the book and the drink in our newsletter, right here, and that makes ordering the book easy - so go ahead.

Since olive juice is what makes a Dirty Martini so dirty, I knew we'd have some of that.  But the crowd in Henderson's story ain't sipping vodka - they're drinking whiskey, lots of it, and who says you can't add olive juice to bourbon?

Henderson writes about a brand of whiskey - Redeye - that used to be available, I think, but that isn't any more, so I'm using Montana's own RoughStock whiskey.  You can use whatever you like - bourbon or rye - the hotter the better.

Hellfire Bitters add a kick that Montana denizens would appreciate, and a little bit of sugar never hurt anyone, so there you go.

I used jalapeno-stuffed olives for the garnish, but any will do. 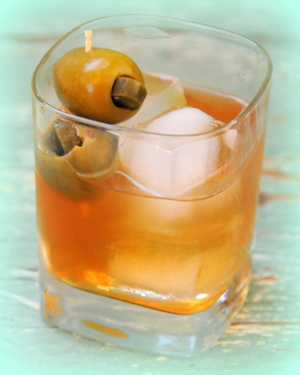 Shake all – except olives – with ice and strain into an ice-filled old-fashioned glass.  Garnish with olives.
Posted by Nicky P. at 3:19 PM No comments: