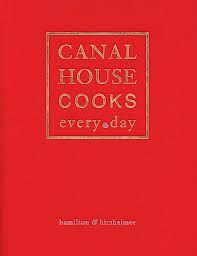 On Tuesday, October 9th, the San Francisco Giants were fighting for their postseason lives.  In the opening round of the 2012 Playoffs, the Giants had lost the first two games against the Cincinnati Reds in a best-of-five series.  If the Reds won just once more, they'd punch their ticket to the second round.

The Giants had lost those first two games at home and were facing a historically impossible task:  to win three games - on the road.  No team in the history of baseball had ever won three games on the road after losing the first two in a best-of-five series.

That Tuesday night, I was in San Francisco by invitation of the gracious Cheri Hickman to celebrate the release of Canal House Cooks Every Day.  Christopher Hirsheimer and Melissa Hamilton are the brains behind Canal House Cooking - the magazine - and now they're behind the publication of this beautiful book. 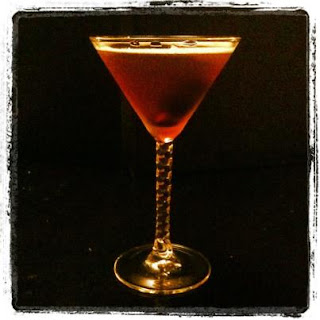 The night before, Monday, I'd mixed myself a Jack Manhattan from Canal House Cooking Volume No. 2.

Put a big handful of ice cubes in a large glass. Add the whiskey, vermouth, and bitters. Stir gently. Strain into a chilled, stemmed cocktail glass. Add the cherries.


On the Tuesday, I drove into the City in record time.  Propitious.  Then I found parking - on Columbus - a block from the party.  If you haven't tried to find parking in San Francisco, early in the evening, on Columbus!, you don't know how propitious this is.

Trust me.  Propitious.  I took both these as good signs, took the good signs to mean that the Giants would be victorious in this, the third game of their series.  All they had to do was win that game.  They needn't think about all the history that weighed against them.  Just win that night and live another day.

I had some time to kill because I'd made such good time driving into the City, so I tarried on Columbus and found a bar with a television facing the street.  Giordano's is just past the Stinking Rose and there was a small group of baseball fans pausing there on the sidewalk just like me.  The most vocal of the fans was a cabdriver, Rick, who drove for DeSoto.  I wouldn't have hopped in a cab Rick was driving because he'd had a bit to imbibe - but as far as shooting the breeze on a Tuesday night while the Giants battled on the big screen inside Giordano's?  No better companion.

As the Giants retired the Reds, as they forced extra innings in this elimination game with the score tied 1-1, as I stood there next to the streetlight with the Italian band of colors - green over white over red, the triptych you find on all the streetlights in North Beach - who should come walking down the street but Scott, a compatriot from my bookstore's home office.

Scott checked his watch, saw we had a few precious minutes before six o'clock tolled, and so he tarried there with me.  Tarried as Buster Posey led off the tenth with a single, followed by Hunter Pence who also singled.  And if there are two batters with better names in a baseball lineup than Buster and Hunter, I haven't seen them.

Tick tock, though, tick tock, and duty called at the dinner we were now two minutes late for.  When Brandon Belt struck out, we took our leave - after I made Rick-the-cabby swear that he'd bring the game safely home.

So we left, and enjoyed an unbelievable meal at the hands of Mesdames Hirsheimer and Hamilton. And while we all were engrossed in this most amazing meal, there may have been some surreptitious checking of phones to follow the game - to smile when Buster scored the go-ahead run.  To smile bigger when the Reds were retired in order in the bottom of the tenth.

Thus would begin a historic comeback as the Giants - after winning the next night, and then also on the Thursday night - did become the first team ever to win three games on the road to win that series.

When the Giants began the next series, at home against the St. Louis Cardinals, they opened the same way they'd opened against the Reds - with a loss, this time against these Redbirds. 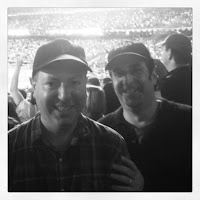 I went to the next game, less than a week ago, by invitation of my friend Randy.  Propitious events?  Propitious events again.  We left Randy's home in the Oakland Hills and arrived at the parking lot in SF that Randy prefers in about twenty minutes.  That's record time.

Bodes well, don't you think? I asked Randy.  He didn't reply, he was busy checking the lot - the lot he prefers, but the lot that seemed to be full.

I pulled into the lot - and an attendant told me to just leave the car where it was.  We were the last car admitted into Randy's preferred lot that late afternoon, and to a superstitious baseball fan - that also boded well.

And while Randy may not be as superstitious as I am, may not see phantoms in the shadows and signs in singing of a bird, he did assure me that he certainly wasn't wearing the same cap he'd worn the day before when the Giants lost.

And the Giants would win that night, in grand fashion, and during the game I bought my new favorite hat.  My new favorite lucky hat - lucky because the Giants won while I wore it - final score 7-1.  Lucky because I made everyone sitting near us doff that cap - for luck, of course - and they all did, happily.

Then, though, things took a sad turn for the San Francisco team when they traveled to St. Louis to play three games in a row.  They lost the first two.  After Wednesday, they trailed the series - this time a best-of-seven - two games to one.  And then after Thursday, they trailed 3-1, leaving St. Louis with the enviable task of just having to win one more game to get to the World Series.  This they could do the next night, on the Friday.  All they had to do was win that game and they would get to stay home and greet the Detroit Tigers in the 108th World Series. 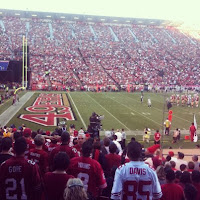 Something funny happened on the way to that victory, though.  Let's back up to Thursday, again.  To the game the Giants would lose, again.  During their Thursday game in St. Louis I was at Candlestick Park in San Francisco watching a ho-hum game that the 49ers would eventually win.  Checking the Giants' score and seeing they wouldn't.  Eventually win.  In the middle of the game, I uncharacteristically made light of the Giants' plight.  I took to the airwaves to post:


Niner game is just so-so. I mean, it's a beautiful night at the Stick. Wondering how the Giants are doing, though.

That would be sarcasm re Giants. Grr.


I don't often poke at the boys because it's not good form, but they were getting plastered and that's no fun and there may have been some alcohol involved.

But did I mention that something funny happened?  I haven't driven to the Stick in years - the Giants began play at Pac Bell in 2000, and we'd stopped driving to football games before that.  But last Thursday?  Harry missed the bus - literally - and so he drove there after his mediation concluded in the City.

After the game, we walked around the stadium to get to the parking lot, to Harry's parked Audi.  I haven't been on the east side of Candlestick since I've driven to a game there.  So it's been twelve years, at least.  And when Harry and I took the turn around the stadium, suddenly there was the long escalator that rises to the upper deck - the escalator that my family and I took on so many occasions.  And there in front of the escalator were all the ticket gates where we bought tickets for Giants' games, back when you could drive to the game and buy tickets on the same day.

The same gates my family used for years during our trips to Candlestick, the gates I hadn't seen - nor thought of - in years.

And suddenly my dad was all around.  He was everywhere.  My dad who died in March of 2010, who died before the Giants would win their first San Francisco World Series - my dad who loved the Giants maybe more than me or any of my brothers.  My dad who taught me how to listen to baseball on the radio.  Who took me to my first game in 1971.  Who took me, along with my mom, to all those Bel Passi baseball games when I was a kid - to cheer on a boy who had none of his talent but plenty of his passion.

And suddenly my dad was all around on Thursday night - and with bay mist hitting our faces, with that escalator and those gates in sight for the first time in years, it's all those years and all those games all at once - with my dad all around.

It takes the world's biggest egotist - and you won't find a bigger egotist than a writer - to think that his dead father would visit him to send the message:  don't worry, your San Francisco Giants will be ok.  But I'm here to tell you that was my first thought.

Of course, now, on Sunday - I realize how silly that reads.

Calm in a way I haven't been in a long time.

I know that I didn't have much stress yesterday during the Giants' game.  I always have stress during Giants' games - especially in October.

Probably - you might say, with a smirk - probably you were feeling the alcohol, and that was all.  Or maybe, just maybe, I was tired.

Or - or - my dad was giving me one more chance to say hello and goodbye.  Because I know this - have I said I know this?  Have I said that suddenly my dad was all around?  That my dad was there, the same way he was there so many times over so many years.  Right there - buying tickets for us all, leading us to that escalator on our way to the upper deck.