There aren't a lot of perks to being a bookseller.  Sure, there are the fast cars, the groupies, the adulation of the press - but besides that, you really have to love books and the people who read them because that's what the job brings. 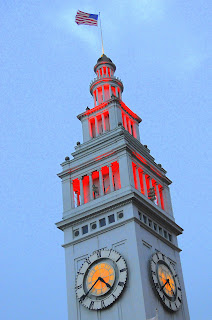 Every so often, though, I get invited to dinner or a cocktail party to mark the impending release of a book.

Yesterday?  Yesterday was all about Ghostman, a debut novel by Roger Hobbs that will be released in February.  Liz Wilner, one of the wonderful Sales Representatives from Random House, had invited me to lunch on Thursday in order to meet Mr. Hobbs.

It was grey yesterday, grey and wet.  But San Francisco can make grey and wet beautiful, and lunch happened to be at the Slanted Door, and the Slanted Door happens to be in the Ferry Building, right on the water, so there was going to be good food, great views, and marvelous company.

As I walked along Market Street through the rain, I was greeted by the wind buffeting the flag atop the Ferry Building's clock tower.

Did I mention San Francisco can make grey beautiful?

﻿﻿﻿﻿﻿﻿﻿﻿Joining us for lunch would be another terrific rep - Jenn Ramage.  Liz and Jenn had coordinated an intimate affair - just a few of my coworkers from various iterations of ye olde bookshoppe.  So Bob would be there, and Ken.  The guest of honor, of course - Roger Hobbs, whose book we were celebrating.

﻿
﻿﻿What I didn't know is that we would be joined by the renowned editor Gary Fisketjon and his beautiful wife Diana.

﻿﻿﻿﻿﻿﻿﻿
Mr. Fisketjon is one of those people who makes me nervous - you know the type.  Really charming, smart, a giant in their field.  He's worked with a who's-who of bright, literary lights.  From Jay McInerney and Patricia Highsmith to Cormac McCarthy and Haruki Murakami.  I often get blinded when I'm near such luminosity, so during lunch I probably spoke too long about too many things.
﻿﻿
You know how they say you only get one chance to make a good first impression?  They're right.

﻿﻿Mr. Fisketjon's wife, Diana, is all the things I'm not in a social situation - glowing, gracious, funny.  When you meet, please ask her to tell the story of her doppelganger - the other Diana Fisketjon - and the ways in which they are not alike.  The story's a joyous riot.

Then there was our author, Roger Hobbs.  Boyishly handsome, dressed in a suit and tie, soft spoken - not the type of guy you'd expect to have written Ghostman, a novel that takes a thief so far away from Cary Grant's version that it's difficult to place both characters under the same rubric.

While we enjoyed the Slanted Door's Grapefruit and Jicama Salad and fought over the Shaking Beef - we talked.  About the thrill of publishing.  About the special experience of an author's first time - the publishing of their first book.  It can only happen once.  Mr. Hobbs commented that if other first times were any indication, he couldn't wait for the next time, and the time after that - because it only gets better, right?

Ken sat across from me, making a finer first impression on Gary than others at the table that I could mention.  Bob was being his usual urbane self.  Liz and Jenn - not working at being consummate hosts along with the Fisketjons, just doing it.  Diana laughing - Gary smiling, sipping wine.  And Roger, friendly, so friendly and cordial, studying the tequila and mescal offerings, maybe the El Tesoro Silver? - until the talk veered towards his book just finished, then the book just begun.  It was like a spark falling too near a powder keg - releasing Roger's passion about books.

He talked with such energy - about his own novel, but also the work of others he admired.  Writers like Donald Westlake and his ability to introduce violence in such an offhand manner that it takes the reader completely by surprise - something Roger echoed in Ghostman and when the outburst comes in his book, I was left shocked and appalled.  Unnerved.

In other words, Roger Hobbs hit a home run.

There are few things that book people like better than talking books - and when we're lucky enough to talk to an author who's as excited about his own words as he is about the words of the great ones who've come before, you'll be sure to see us animated and happy.

Ghostman is a caper - an intelligent and thoughtful caper that's also violent and explosive.  The opening scene of a coolly designed casino heist gone horribly wrong will have you hooked until the end - until the questions that Roger Hobbs has sprinkled behind him are answered.

The Ghostman of his novel?  You'll know him as Jack Delton.  Jack Delton will leave you wanting more.  It's a pity you have to wait until February to start walking his path.

The only palliative I could think of was a good, stiff drink.  I began with tequila - since that had struck Roger's fancy - and added absinthe because absinthe clouds and that would create a ghost drink.  Mole bitters, because they're a natural complement to the tequila.  It should just be a shot, because I don't see Jack Delton lingering over a drink.  To quote the movie Heat, Don't let yourself get attached to anything you are not willing to walk out on in thirty seconds flat if you feel the heat around the corner.

So, for Roger?  For Jack?  Mix yourself a Ghostman to help keep yourself warm until February. 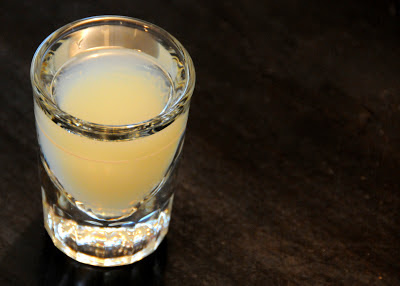