I was torn.  We hosted Stephan Pastis last night at the store.  Mr. Pastis is the wizard behind Pearls Before Swine,and if you don't read this comic, you're missing out.  It's been a favorite of mine for years because it's hilarious, impertinent and wonderfully wise.

It's also one of the most-syndicated strips going, so I'm not the only one who thinks so.

When I learned that we had the great good fortune to have Mr. Pastis visit the store in late October, I was ecstatic - I would say I was happier than a pig in shit, because Pig is one of the main characters in Pearls Before Swine, but my mom wouldn't be happy.  So I won't.

My office at the bookstore has been decorated with Pearls paraphernalia for longer than I can remember.  David - a coworker and friend - taped a single panel from one of the strips on my monitor sometime in 2005.  Monitors have died since then, but the panel is always carefully removed and reapplied.

October 24th was going to be a good night for me - I would get to meet the man who's made me laugh more than any other.

Then?  Then?  A funny thing happened on the way to our forum.

The San Francisco Giants happened - and their most improbable march to the World Series:

No team had ever lost the first two games in a best-of-five postseason series (like the Giants did) and then gone on to win the next three games, on the road, in a hostile environment.

Very few teams had ever gone down three games to one in a best-of-seven series to then roar back and win three in a row, to secure the Pennant and advance to the World Series.

The Giants did that and capped it with a pasting of their opponents at home, in San Francisco, during a down-pour - and the image of Marco Scutaro, the National League Championship Series MVP lifting his face to collect raindrops with a smile wide enough to see back in St. Louis is something I'll never forget.

Not that I actually saw it.  I was working.  Poor, poor, me - I know.  I know - poor, poor me.  Shuddup already.  Who cares that I missed the most glorious home game in the history of this storied franchise on Monday of this week - it's not a long story, and there's no need to revisit it here.

Big deal.  Enough.  The Giants won a Game 7 for the first time ever - and since they go back to 1883, that's saying something, but so what?  Winning the Pennant, at home?  In the rain?  It was a glorious spectacle and I missed it because duty called.  So what?  Oh well.  People go to bed hungry every night and I'm complaining about a missed baseball game.

In a special and lovely twist of fate, though, the good friend (blessings to you, Randy) who had invited me to the Game on Monday invited me back to the very next game - the Game last night.

Last night?  Game One of the World Series.  At home.  Against the most vaunted pitcher playing baseball today - Justin Verlander.

This Wednesday night, like the Monday before - had all the makings of being something historic.

But did I mention that Stephan Pastis was going to be in the house?

That's where the Greek guilt comes in.  I had planned on being there.  Had planned on taking my Elizabeth because she has just discovered comics, can crack herself up reading these simple panels of wonder that the best (Charles Schulz, Gary Larson, Stephan Pastis) make look so easy when of course they must be so hard.

In Pearls Before Swine, Pig is the Charlie Brown character.  Well meaning, always trying to do right.  Rat?  Rat is Lucy on a bad day.  Conniving.  Spoiled.  Always ready to pull the football away from Charlie "the Pig" Brown because she can.

I'm embarrassed to say that in my interior fight between Pig and Rat - the Rat won.

I asked my co-workers to explain to Mr. Pastis that in any other situation, I would be there in the store cheering him on, but that on this night - this night of San-Francisco-Giants nights, my selfishness won out and I would be in AT&T Park, not Alameda.

Little did I know that last night would indeed be historic.  Pablo Sandoval, the third-baseman for the Giants, had a game rarely seen in the World Series when he hit three home runs in his first three at bats.

Only three other players have ever done this.  Albert Pujols did it.  So did Reggie Jackson.  Oh, and Babe Ruth.

That, friends, is heady company.

Needless to say, we - Randy and I and his brother Richie and Randy's friend Rob - had a grand time.  Cheering until we were hoarse, drinking until we got to Happy and beyond.

And then there was Pablo.

And then there was Pablo, Pablo Sandoval doing this thing that had only been done thrice before.

And then there was Pablo

The Giants won the game last night.  Battered the best pitcher in baseball until he left the mound - bewildered at the devastation that had been visited upon him.  Devastation that for him, for a pitcher with his credentials, had been unimaginable only an hour before.

The final score was the San Francisco Giants 8, the Detroit Tigers 3.  Game One was in the books, and I had seen it in person, and it was the greatest game I've ever seen as an adult.

The Greek guilt, though, lingered.  This, then, would be when the Greek absolution comes in.  Mr. Pastis is, like me, Greek.  So he understood.  Like me, he is a baseball fan.  He told Jerry - our events coordinator - that if he had tickets to last night's game, he would have been there, too.

Laughing off my absence with grace and charm.

Throughout the event, our customers kept him updated on the progress of the game.  So everyone had a grand time in Alameda - like we were having across the bay - laughing with Mr. Pastis but checking the score and letting him know when the good bits happened.

When I came into work this morning, I saw that Jerry had left my stack of books - now signed - just to the left side of the computer monitor that has Pig and Rat taped to it.  In front of the monitor lay our autograph book.  I took it in hand, flipped it open to the pages Mr. Pastis had signed.

And this is the Absolution I found: 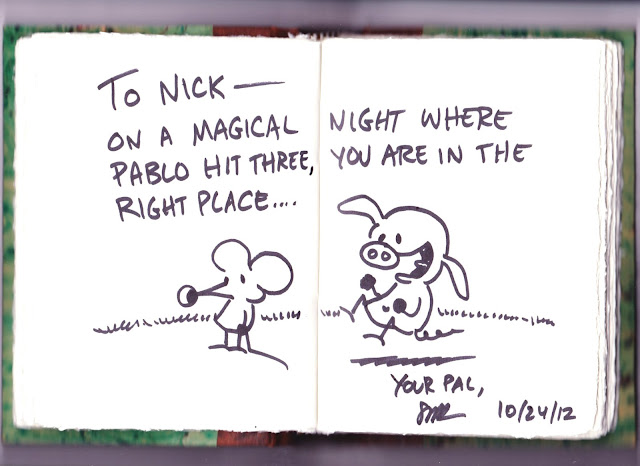 Mr. Pastis - the Pig in me thanks you.   The Rat in me wants to buy you a drink.  Metaxa, rocks.  And not just any Metaxa, but the Private Reserve.  Have you tried it?  It's sublime.

Did I say thanks?