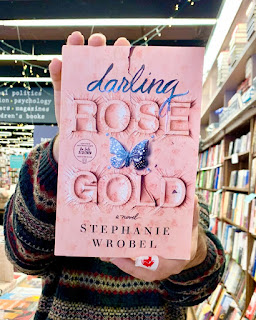 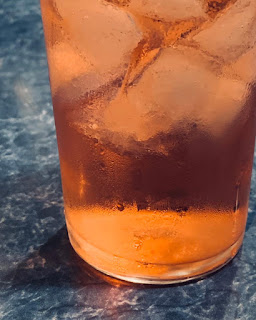 Stir tequila and juice with ice.  Strain into an ice-filled Collins glass.  Top with soda. Garnish with cranberry.
Posted by Nicky P. at 2:48 PM No comments:

Taft was the first novel of Ann Patchett's that I read.  This must have been 1994 or 1995.  I wasn't a bookseller, not quite yet, but did work near a Books Inc. in Union Square.  That store was terrific but - quirky?  Could they have had a section on Russian Military Strategy in the 18th Century?  Just maybe.  But they also had Taft and I devoured it.  It's a scary story about Memphis, about bars, about dead fathers and how they continue to impact lives even in death.  When I handed it to Ms. Patchett after her event here in Brookline for her latest, The Dutch House, she laughed.  "Taft," she said.  "No one read Taft."  I assured her that was not quite true, and she smoothly signed it, and Bel Canto, and The Dutch House. 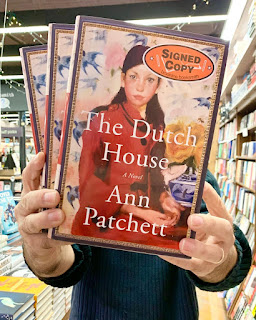 Ms. Patchett draws a crowd, and we had hundreds line up for her latest offering.  The Dutch House is brilliant - it's about family and jealousies and evil stepmothers and also questions whether or not familial bonds can ever be too strong.  For me, with Patchett, story sometimes is overshadowed by character - because, oh, her characters.  John Nickel, from Taft.  Roxane Coss from Bel Canto.  State of Wonder's Dr. Marina Singh.  These are all people I'm interested in and want to spend time with after their stories end.  And The Dutch House is no different.  Siblings Maeve and Danny are charismatic, beguiling, infuriating and that hardest of all qualities - compelling.  How do you know that a bookseller - in addition to one of our best novelists - wrote their story?  When you read that the brother and sister, over coffee and cookies, are coming up with the worst attributes of the aforementioned evil-stepmother, and one of her sins is that she "gave no evidence of ever having read a book."  Bookseller shade can be the best shade.  So - did they deserve their own drink?

We wouldn't be here if they didn't.

I think I knew even before reading the novel that genever would be an important ingredient.  Sometimes I get blindsided by a title, and The Dutch House did just that.  There isn't an alcoholic beverage that is more Dutch than genever - the precursor to gin - and when I come across a title that telegraphs an ingredient, I usually follow its lead.  So I did.

Sometimes authors throw a lot of boozy ingredients at you.  With The Dutch House, that wasn't the case.  There's some wine; the father retires to the library with "his drink."  But Patchett doesn't hit you over the head with alcohol.  Coffee?  That's another matter.  There's plenty of coffee drinking happening - so that would be ingredient #2.  We're lucky to have a number of distilleries that have been exploring coffee liqueurs, and Saxtons in Vermont has created Perc, which is nothing short of delightful.  It's not syrupy and its flavor of coffee is exquisite.


In The Dutch House, there's a moment when Maeve has a fight - reserved, quiet, but a fight nonetheless - presaging the permanent arrival of her not-yet stepmother.  (That eventual wedding is wickedly described:  "The ceremony was performed by a judge that none of us knew, a man my father had paid to come to the house to do the job, the way you'd pay an electrician.")  After Maeve leaves the dinner table without asking to be excused (and even that seemingly slight impropriety reads positively indecent) Danny is left in silence with his father.  Finally, after his father decamps for the library, Danny grabs a lemon bar for himself and an orange for Maeve.  He takes it upstairs in their Dutch House and sees her sitting in her window seat - with the light catching her just so she looks like a painting.  Maeve takes the orange and "[digs] in her nails to open it up.  She bent her knees so I could sit down in front of her.  'This doesn't bode well for us, Danny,' she said.  'You might as well know that.'" 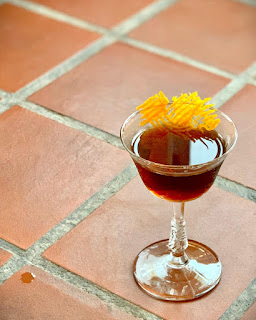 Such a wonderful orange spell deserved its addition to the drink, and I thought it would be Cointreau, but after playing around with the ingredients, good old triple sec mingled with the other ingredients better, so the orange would be added that way.  And that's how a Dutch Coffee for Ann Patchett's The Dutch House came to be.

Combine all with ice.  Strain into a chilled glass.  Garnish with the orange peel.
Posted by Nicky P. at 3:26 PM No comments: 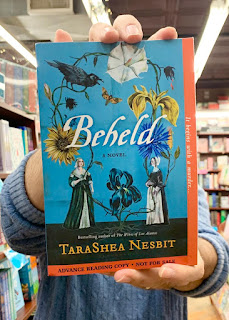 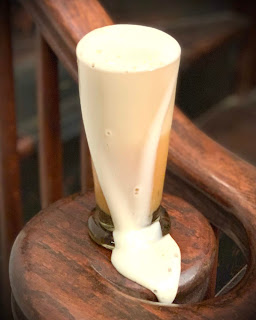 Dry shake all the ingredients - except the ale - until emulsified.  Shake some more.  Add ice and shake even harder, even longer.  Strain into a chilled pint glass already holding the ale.  It helps to have a glass from the 1700s, but any pint glass will do.
Posted by Nicky P. at 5:22 PM No comments: