Drink From the 18th Century


Pauline's.  Have you been to Pauline's?  It's on Park Street, just up from ye olde bookshoppe.  It's many thousands of square feet on two floors - jam packed with treasures.  It's where I found the perfect Tiki glasses for the Bad Monkey cocktail.  You'll always find something, even when you're not looking for anything.

They have a sale right now - 45% off everything in the store.  It's a thank-you to their customers for recently being voted the best Antique Store in the East Bay.

I went in looking to buy an incredible Mason jar I've been coveting - and don't give me heartache about what I covet, ok?  She was still there, beautiful and big.  Bigger than any Mason jar you've ever seen, lid and all - which was impressive considering she was more than a century old.  We have a few of her cousins, and outside, on a summer day, full of flowers?  They're delightful, I think.

Pauline asked after the girls, wondered how things were going at the shoppe - and then was intrigued when my eye was drawn to the seven glasses behind two Mason jars - neither as large as the beauty who had siren-called me into the store today.  I'd been allowed behind the counter and past the brass chain, close to some of those treasures I told you Pauline carries.

But those glasses?  In the display crowded with trinkets and baubles?  Ooh, that little toy gun, like the one Uncle Dean gave to my brother Dean.  Or the double daguerreotypes in the wood and copper frame?

And again, behind the Mason jars, those seven glasses?

Those are from the 1700's, Pauline said.  I bought them from Muriel Johansen - she lived over on Grand?  She was the biggest glass dealer in Northern California.  I must've bought them from her forty years ago, and at the time she didn't own anything less than a hundred years old.  The family she bought them from had been using them for water glasses.  I had them appraised after picking them up - the appraiser was beside herself.  Couldn't believe what I'd brought her.

I couldn't quite believe it either.  The glasses were simple, but gorgeous - the bases thick, full of constellations of tiny air bubbles.  The glasses were tall, with straight sides sloping to a smaller base.  Pilsner shaped, though Pilsner beer hadn't been invented yet, wouldn't be for another hundred years.

I just imagined the number of drinks that each glass had carried, alcoholic and non.  The number of lips that had tasted some frothy concoction.  The different people from different generations.  From the time of our Revolution to now - with the forty year break that they had spent behind glass in Pauline's display case.

This was a Dusty Hunt of a special kind.

I put my beauty of a Mason jar back with a sigh, spectacular though she is.  Did I mention how large she was?  But these glasses - these wonderful glasses...

I took my time choosing two.  I always take my time - sometimes too much, of course.  But a few had some nicks taken out of the rims, and while I'd love to have them all, you can't have everything, so I took my time and chose two.  Besides, when I find lovely cocktail glasses, I pick up singles, always singles, so our set is blessedly mismatched.  But these glasses sang out for two - at least.

How could I separate sisters who are 250 years old?

So I picked out my two and told Pauline I'd be filling them that night with something a bit stronger than the water they last held.  She wrapped them with care in brown paper torn from the huge roll behind her - then I went back to work and shared my find with my coworkers.

Those who would listen. 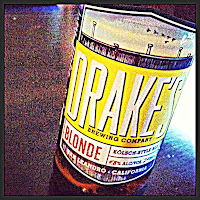 On my home I stopped by Du Vin Fine Wine - even though Dan, the owner, is in Santorini right now sampling Greek vintages, that bastard.

He now carries a few good beers, terrific additions to his curated wine selection, and I scored a six-pack of Drake's Blonde Ale because it's brewed with Pilsner and I thought that'd look good in the glass.  Also, who doesn't like drinking with a blonde?  And Drake's is local, did I mention that?  So if you want to drink it, you have to come visit me.

So come visit me.

Karen had crocked up some ribs for the kids tonight, and if you don't think that Blonde Ale was going to go wonderfully with ribs slathered in Sweet Baby Ray's BBQ sauce - well, then you don't like beer and ribs. 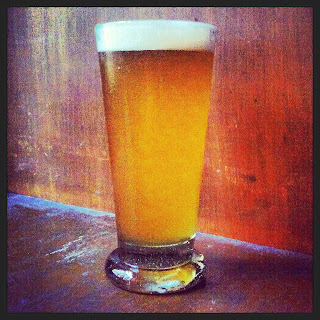 But the beer.  The beer?  In that glass?

It was beautiful - beautiful just because, sitting there against the wood of our buffet, but beautiful again because of all the drinks that had gone before.

All the people who had drunk from it before.

The languages spoken over its rim, the jokes told behind its back.

The fights that ended with those glasses clutched in hand.  Their contents forgotten - and then looked at, and then remembered, and then the clinking of glasses, truces called.  Kisses sought.

And then I smiled at the notion of a beer brewed in San Leandro in 2013 almost perfectly fitting its twelve ounces into a glass blown by a forgotten craftsman in 1750.

So I drank from the 18th Century, the 19th, and then the 20th.  Drank from those centuries and then introduced my glass to the 21st.

Oh, and the after, of course.  The lacing left on the inside of the glass after the blonde had gone.  That was beautiful, too. 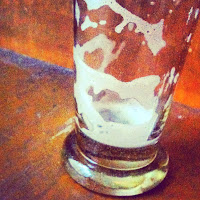 So come visit.  We'll pick up some more of the Drakes while those glasses chill, and then we'll clink to happy times.