Today was National Daiquiri Day, but you knew that.  Did you also know that daiquiri's don't have to come out of a Slushy machine?  That all you need is rum, lime juice, and a sweetener?  I know, I know - simple.

Unless you don't have a lime, which I didn't, so I made a plea via social media - pick your poison, Twitter, Facebook - it's a great big world out there with friends available to help.  You just need to ask, even though asking for help can be hard for some people.  Not for me, but for some.  I need so much help it would be a shame not to ask.

I got plenty of responses, but the closest available limes were in Napa, which is a bit of a drive on a Friday night - so I did things the old-fashioned way.  I knocked on our neighbor's door. 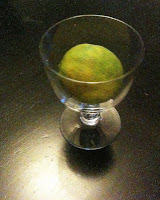 John maintains he loves it when we knock because he never knows what we'll be asking for - Chairs? Cheap labor? Vodka?  It's a crap shoot with us.

Tonight he had what I needed - the Anderson's always have what we need.  In addition to the lime, John also had a glass which I borrowed in case there was extra daiquiri juice.  I took it just to be safe.

Imbibe Magazine had tipped me off that it was the special Day, and they had conveniently included six daiquiri recipes.

I went for the Brooklynite because it used Jamaican rum, which I had, and honey syrup, which I had, and it was courtesy of the Bartender's Guide by Trader Vic - and I have a soft spot in my heart for the Trader since his first bar was here in the East Bay, in Oakland.

So, with lime in hand, I had enough for two.  Coulda made three but John's wife Beth is in Tahoe. 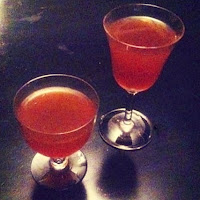 Combine all ingredients and shake with ice. Fine-strain into a chilled glass and garnish.


I didn't have any lime left over for a garnish, so I skipped that.

John didn't mind, not at all.