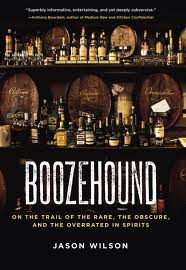 Driving through the hot streets of my hometown and I have just a few minutes for a quick Dusty Hunt.  To recap, Dusty Hunting is hitting old-school liquor stores for bottles of booze that have collected dust because they were purchased, set out on display, but never found a home - often just getting shuffled to lower and lower shelves, sometimes for decades.

Fine bourbon can be found - not by yours truly, not yet, no butterscotchy Old Forester from the '70's for me.  For me so far it's been other finds - other, well, oddities.

In Jason Wilson's book, Boozehound, he describes Dusty Hunting, but he calls it Liquor Store Archaeology.  For him, it was a game he played with his brother - each trying to unearth something as singular as a Schliemann discovery.

He finally declared his brother the victor in their games when Tyler dug up Peanut Lolita - the dancing harem girl on its label enticing him to buy this bourbon-based peanut-flavored liqueur.

That's gritty on the tongue.

And that was last bottled when James Earl Carter, Jr. was President. 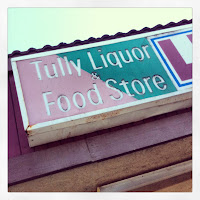 --but now?  With Dusty Hunting on my mind?  Tully Liquors takes on a whole new meaning.  I pull into the lot and hustle inside.  Did I say the clock was ticking?  The clock's ticking.  I'm supposed to be somewhere so I read the shelves like a bad summer book - fast but fascinated.

Curiously, in this Modesto liquor store, I come across a bottle of St. Germain, a gorgeous, elegant liqueur - which is a little like finding Grace Kelly in a whore house.  But why is the spirit inside the splendid bottle colored dark brown?  The elderflower liqueur should be delicate and light - this is anything but. 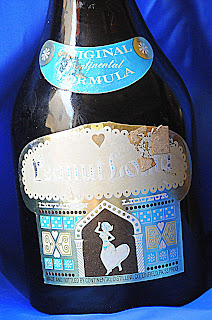 They've also got 1.75 liter plastic bottles of Wild Turkey - old?  Old enough that the bottles are collapsing in on themselves.  Old, yes - appetizing?  Not really, no.

But there, on the bottom shelf, my eye spies five (!) bottles of Peanut Lolita.

It's hard to make out the name on the label - it's faded, practically white.  But the girl swaying her harem hips on the front of the bottle guarantees that it's Peanut Lolita.  I try and take a quick picture of the bottles on the shelf, only to be yelled at by the guy behind the counter.

Trying to placate him, I show that I've got one of the bottles in hand - I'm a customer, I'm buying - but he still doesn't like it. 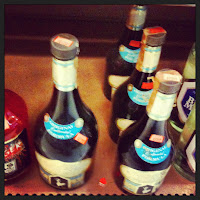 I pay for the bottle and head to my car where I'll send Mr. Wilson a quick message - just, you know, shooting a query off to a man I've never met but who might receive it because all the world's connected and all the men and women tweeters:

Then I head off into the Modesto afternoon wondering what the heck I'm going to do with Lolita there in my backseat.  I'll be able to mix her into something, right?  I'm sure of it.  I just don't know what.

Later, as the July sun finally sets, I receive a reply from Mr. Wilson:


@NickPetrulakis Whaaaaaat?!!!!!! Buy. Buy two and I will buy the other from you.


So I'll do just that - grab another bottle of Lolita on my way out of town.  I'm thinking, there's no need to rush.  The bottles have been there for more than three decades - they'll still be there in a few hours.

And that's one of the things I love about this kind of Hunt.  That the bottles have been there - from Carter to Reagan to now.

Back home and I send off Mr. Wilson's bottle with a note I typed on my dad's old Remington.  I hope Lolita arrives safe and sound - I hope the Federales don't intercept her.  It's probably not legal, right?  Shipping booze to the Boozehound?

With my own bottle, I've decided to beat the heat with a Sundae - a Bourbon Sundae.  Come on over, bring friends.  You scoop, I'll mix and we'll both drink to the general joy of the whole table. 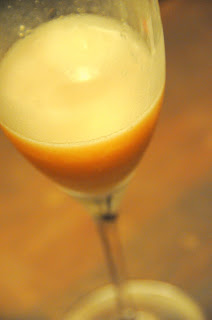 Combine bourbon, liqueur, syrup and bitters with ice.  Stir.  Strain into a chilled glass.  Using a melon baller, scoop once (or twice) and add the vanilla ice cream.