In my office at ye olde bookshoppe there's a poster above the desk.  Ernest Hemingway looks down, impossibly young.  Not the bearded Hemingway that comes to mind when you think of him - not The Old Man and the Sea.  It's his passport photo from when he lived in Paris in 1923.  It's before the Sun Also Rises, before Fitzgerald, before everything, really. 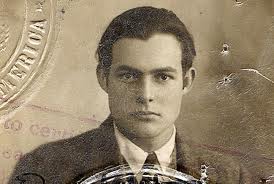 
The only words on the poster, besides his name, comprise one line from A Moveable Feast:

All you have to do is write one true sentence.

I look at those words, at that face - that face that had so much living ahead of it.  His sentiment sounds so simple and of course that means it's going to be so very hard.


Today - his birthday - and I'm thinking about Hemingway.  Trying not to think too much about the end - about that other July day in Ketchum, Idaho.  But of course I do think about it, and thinking about it brings to mind one of his brilliant, late stories:  Get a Seeing-Eyed Dog.

Hemingway has already been on the Safari in Africa where he was hurt so badly, was already in the pain that would be with him the rest of his life.  In the story, a man - Philip - has suffered an accident and lost his sight.

Philip can now only see himself as a burden, less than he was, and so tries to distance himself from his unnamed companion - obviously a lover.  Not so obviously a wife, and Hemingway doesn't say.  What Hemingway does do is describe her trying to provide relief even though they both know she's ill-suited to the role of babysitter.

"Can I make you a drink?....You know how worthless a nurse I am.  I wasn't trained for it and I haven't any talent.  But I can make drinks."

She has been so good and she was not built to be good.

But her simple question?  Can I make you a drink?  Sometimes, there's nothing prettier.  If you ever have need to get into my good graces, that's the question to ask.  And for Philip, a drink is just the tonic for the rainy day he finds himself trapped in.

Then comes a string of Hemingway sentences.  Not the choppy mockeries people use to ridicule his writing, but a paragraph of his own:


He heard her coming up the stairs and noticed the difference in her tread when she was carrying two glasses and when she had walked down barehanded.  He heard the rain on the windowpane and he smelled the beech logs burning in the fireplace.  As she came into the room he put his hand out for the drink and closed his hand on it and felt her touch the glass with her own.
"It's our old drink for out here," she said.  "Campari and Gordon's with ice."


There's so much I love about those images.  Without sight, we're given a glimpse of Philip's heightened senses - of hearing her coming up with two glasses, then the rain on the window.  We reach out into the dark, his dark, for the glass he knows will be there.

Then?  Then she touches his.

Oh - and the drink?  Splendid and easy.

In his book, To Have and Have Another - A Hemingway Cocktail Companion, a different Philip, Philip Greene, describes the loveliness of Campari in cocktails, from the Americano to the Negroni to this, the most simple of all: 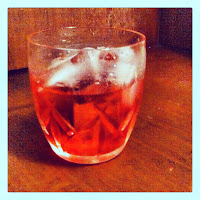 Pour over ice in a highball glass, stir.


Tonight, I'll be reading a little Hemingway, sipping a damn fine drink, and will continue looking for that one true sentence.
Posted by Nicky P. at 2:23 AM