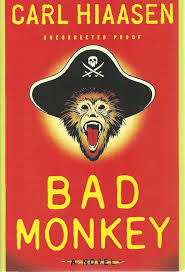 Are we clear?  Go buy the book.

And - if you live in the bay area, you can see Mr. Hiaasen next Sunday, June 23rd, at the Chapel in San Francisco.  Ye olde bookshoppe is hosting the event and it's going to be a humdinger.  Mr. Hiaasen will be in conversation with Christopher Moore - and since these two are responsible for the funniest novels written in the past twenty years, and since they're going to be under one roof in San Francisco - seriously, just buy the book now and get yourself a ticket for this Sunday.

To commemorate the event, and because the Chapel has a bar - I know, I know, only in San Francisco would a Chapel have an open bar on Sunday - I thought it would be a good idea to offer a special cocktail.  Hence, the Bad Monkey.

And since I get to put on a suit and introduce the authors and pimp the drink, I wanted it to be a tasty one - so I kept it simple and good.  I had to start with rum.  If Florida had a state alcohol, that's what it would be.  And since - if you've read even one of Mr. Hiaasen's novels - you know that Florida is as much a character as the characters, you're with me.

Are you with me?  Florida = rum, so we begin with rum.  And to make it go down as easy as the book, I sweetened it up, just a skosh, with a dram of banana liqueur.

Because it's a Bad Monkey, I threw in some mole bitters because a bad monkey might want his banana dipped in chocolate.

Usually, when I'm mixing drinks at home, I snap a quick pic and throw it online.  And so I did this with the Bad Monkey. 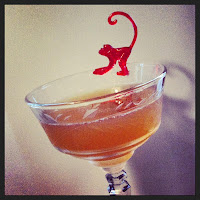 
But then, since it's kind of a big deal, what with these two heavy-hitting authors coming to town, I thought maybe I should stage the picture a little more than I usually do.  And that's why I woke up today thinking about my dad - it being Father's Day and all - and the Bad Monkey.

You thought I forgot about that connection, didn't you?

Since time's a wastin, I needed to figure out how the staged picture would differ from the snap - and that meant a different glass.  Different because the drink, we decided (we being the crew at the store), needed to be served over, not neat.  Over, because the ice would mellow the cocktail a little.

I thought a heavy rocks glass would do.  Something with a '60's feel because that's what the drink tastes like - a nostalgic Florida with a little Beach Boys thrown in.

Specifically, I thought of my dad and my mom and the Tiki bar set he bought for her while they honeymooned in Hawaii in 1962.  It's beautiful and bamboo - highball glasses, shot glasses, an ice bucket, all with that wonderful Tiki vibe.  I've had two of the bamboo glasses on my desk in my bedroom in my parent's house for forever.  I don't remember when I first took them and filled them with pens, not booze, but I did.

My fondness for the drinking culture was obviously instilled early.

So those glasses would be ideal - actually, Collins glasses of bamboo would've been dead-on, but they didn't come with the set, just the highballs.

Except the set is in Modesto, not Alameda (though I really should have it here - it's just I need to convince my mom and my brothers that I deserve it the most), and I didn't have time to drive home to borrow it and did I mention the event is a week from today?


Today was Father's Day.  I mentioned that, I know I did.  And my day began with my daughters making me breakfast.  You might not appreciate peanut-butter toast with a Diet Coke chaser as much as I do, but my girls made it for me without assistance so it tasted better than room service at the St. Francis.

Then?  Then Elizabeth suggested that I should take her and her little sister antique shopping.  Wouldn't that be a great way to spend the morning?  Wouldn't it, Daddy?

If you knew me, you'd know the answer was yes.  Antiquing is something Karen and I used to do all the time, and the bug has infected the girls - so away we went.

They would be searching for vintage handkerchiefs - their passion - and I would be looking for that old-school rocks glass.

We visited three new-to-us shops in Oakland - and except for one shot glass decorated with cartoon monkeys - I didn't see anything on the money.  The girls?  The girls were also without hankies, so we went back to Alameda and hit two shops that always provided.  Always.

Elizabeth found a boxed '50's dolly at Park Street Antiques - and at Pauline's, Kristina hit handkerchief pay dirt.  Pauline always has hankies - many of her bins overflow with them - and she smiled as she saw Kristina sitting on the carpet carefully looking at each one.

I told the girls to hold down the fort on the ground floor and I'd check out the downstairs, that pastiche of treasures just waiting to be picked over.  Like Abu, Aladdin's monkey in the Cave of Wonders, it's hard not to grab at all the beckoning, shiny objects.

Sure enough, a rocks glass practically leaped into my hands - with exactly the right sixties feel to it, what with its outside pattern of gold leaf squares.

I'd found what I was looking for - I thought - but instead of hurrying upstairs, something held me back and I decided to take one more spin down one more aisle.  That's when I saw, by itself on a small table - and this itself is a miracle because nothing is ever by itself at Pauline's, everything's in a wonderful jumble.  But there - on a small table by itself - was a Tiki bar set.  An exact match to the set my parents bought in Hawaii more than 51 years ago, except instead of highball glasses, the six glasses in this set were taller and skinnier.

Collins glasses, just like the ones I had imagined this morning. 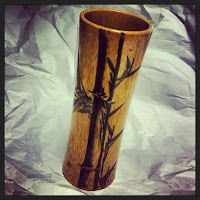 Bamboo Collins glasses, absolute mates of the set that sits tucked away in my parent's garage in Modesto.  The perfect thing.

I grabbed everything:  the six glasses, the ice bucket, the tongs.  And headed upstairs with that set and my rocks glass (why the heck not, it was just a buck) and Kristina's handkerchief.

Pauline gave me a deal - she always does, if I ask, and I asked - and then we set off for home.  Then I headed into work - Father's Day can be busy at the store.  But all day all I could think about was - how the heck did that happen?  What magic occurred in the basement of Pauline's Antiques?

Did I manifest those glasses?  Or had they always been there?  Just waiting for me to see them?

Sometimes it's best not to question things too much - so I won't.  But I will think of my dad today - and I will mix a Bad Monkey and raise it high to him.

Happy Father's Day, Dad.  Can I please have the Tiki set you bought in Hawaii?  It'll match a set I picked up today - perfectly.