They Ban Books, Don't They? 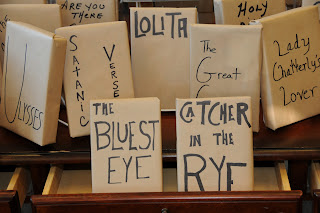 Brothers and Sisters! Sisters and Brothers!  It’s been long since I last spoke to you, too long. But I am here today to spread the Word, the good Word. Can I get an Amen?

Better, that’s better. Remember – you gotta be loud if you wanna do good.

I am here today to speak to you of a slithering evil. A serpent hidden in the grass. Yes, hidden. For just as the serpent hid in the garden, just as Satan deceived Eve by posing as something he was not – for would not Eve have run from Satan if he had shown himself in his full, repellent glory?

*Eve would have run, Brother!*

*But Brother Nick?  This is the Land of the Free.  We've fought, and continue to fight, wars at home and abroad to maintain our Freedoms.  We don't censor.*

I hear you, Brother Kahane, I hear you. ‘Twould be nice to believe that the home of the brave was not run by cowards – but there they are. Cowards kowtowing to the liars, deceivers, and those of little minds.

The Manifesto, all prettified, begged to be displayed. Which we did at ye olde bookshoppe. We surrounded the Manifesto with books – after wrapping the books in brown covers, their titles crudely written in black, the black scrawled across all that brown. We’d hoped the effect – all those books under wraps – would be arresting.  We hoped people would stop and stare. And they did, Brothers and Sisters, they did!

Of Mice and Men.  Lolita.  In the Night Kitchen.

Why are these books all wrapped up? they’d ask. And we’d tell them, Brothers and Sisters, we’d tell these innocent customers the truth.  Ask them to read the Hopkins Manifesto.  Some would scoff. Or stutter. Others got real quiet real fast.

You mean, they would say, these books have been banned, like, elsewhere, right? And there, Brothers and Sisters, is when we would pause. Maybe sigh. Then gaze down at the books in their plain brown wrappers.

The Kite Runner.  Junie B. Jones.  A Wrinkle in Time.

Are You There God? It’s Me, Margaret.  The House of Spirits.  Friday Night Lights.

–these are the books under heaven that need to be removed. From libraries. From classrooms. Snatched from your hands like gold stolen from the just.

Forever.  The Giver.  The Absolutely True Diary of a Part-Time Indian.

–we look down at the printed word, hidden in plain sight, and tell them the story of Stockton, Missouri.  For 'twas Stockton’s School Board that voted less than one month ago to yell ‘Get Thee Gone’ to The Absolutely True Diary of a Part-Time Indian. It shall be torn asunder, they decreed. Trampled.

Ken Spurgeon, lily-livered member of the school board, was not swayed by arguments that Mr. Sherman Alexie’s book was award-winning and worthwhile. We can take the book, he said, and wrap it in those twenty awards everyone said it won and it still is wrong.

Or Rod Tucker. Let’s take Board Member Rod Tucker. Got that name? Rod Tucker. Tucker also wasn’t moved by the testimonials, by the fact that Sherman Alexie won the National Book Award for this title. The book has too much profanity to be of value, Mr. Tucker professed.

How about Mike Holzknecht? Got that name? He’s a concerned parent. Why is Mikey concerned? Why, the book describes – I shudder to write it, Brothers and Sisters, I shudder. But the book even goes so far as to describe the act of an adolescent spilling his seed upon the ground. Can you believe it?  Do you believe?

Oh the shame. Poor Mikey Holzknecht is concerned for his children, frets that they would be subjected to such filth. To keep them virginal and pure, I imagine Mikey collecting his family and reading from the Good Book every night after supper.

Well, ok then. Onan. What does the Good Book tell us of Onan?  We are told that Onan had him a brother, Er. But Er was wicked so the Lord slew him. Thus Judah, the father of Er and Onan, worried about the long lonely nights that Er's widow would suffer, so Judah instructed Onan to go in unto his brother’s wife. So Onan did. Went on in unto his brother’s wife. But he threshed within and winnowed without – as our good Brother among the Israelites Rashi describes it – and so Onan spilled his seed upon the ground.

This of course is all described in Mikey Holzknecht’s Old Testament. As is all manner of wickedness and deceit. I wonder if Mikey has read all of the Good Book? Or if he just skims the New?  I fear if he ever does, Mikey Holzknecht will demand that the Bible be removed from his children’s classrooms, to protect them from the description of Onanism.  And whatnot.

Brothers and Sisters, I could go on. I could quote the McKullicks. Quite the pair, those two. If the husband wasn’t saying We don’t feel like it’s got proper language, not for children, then his wifey was crying how It’s sure not for kids. I sure wouldn’t want my children to read it.

And if she can stop her children from reading it, well, why not stop yours, too?

Oh, the road is long. Long and rocky.  And though your Brother Nick is weary, I could continue. Could tell you the story of my nephew. The Christmas when we purchased him the offending opus – yes, we had the temerity to buy him The Absolutely True Diary of a Part-Time Indian.

Our nephew, perhaps he was not the most voracious reader. Perhaps the word had not inspired him as much as we would have hoped. But it was Christmas, and we – my wife and I – we buy books for our nieces and nephews. It is what we do. And so this book went to that nephew. And shortly thereafter, our Sister-In-Law called. Wanted to know – with a laugh in her voice – Brothers and Sisters, I do not have to say that she inquired – with laughter in her voice – whether we knew what was in the book, because the nephew had been glued to The Diary ever since he opened it.

What was in the book?  Profanity?  Yes.  The Sin of Onan?  Yes.  Did it wrangle with racism?  Indeed.

None of these matters, of course, would pique the interest of a youth of today.  Entice them to read when they are confronted, confounded, and assaulted on all sides by television, the internet, video games.

And the nephew? Our nephew?  The nephew who theretofore had not been a reader of ravenous appetite?  When next we saw him? The day after Christmas? The nephew hurtled out of his parent’s van and knocked me over with his hug. Repeating – Thank You, Thank you. That’s the best book I’ve ever read, Uncle Nick. Ever. Thank you.

And so I want to ridicule the leaders who would take the book out of my nephew’s hands. ‘Tis too easy, you say. Too easy, indeed. And after all, my nephew doesn't go to high school in Stockton, Missouri.  So why worry?

As Banned Book Week ends, as I take down the Manifesto of Ms. Hopkins, let me remind you from my bully pulpit that book banning is not something that was only done in some long ago and far away. It happens now. And it shouldn't matter whether here or there.

Nor should it matter which book.  Maybe Mr. Alexie's words wouldn't touch you the way they touched our nephew.  It does not matter.  It's the taking away that matters.  The censorship.  The banning. For tomorrow, it shall be your favorite book.  Tomorrow or the day after.  I tell you this, I promise you this.  So be aware. Tell me you will be aware, Brothers and Sisters!