There's a certain slant of light - thank you, E. Dickinson - but if we're talking about New York, not Emily's New England, that light is charged with energy different from anywhere else.

My red-eye from Oakland landed at JFK an hour before sunup.  New York wakes later than San Francisco, so the taxis were just idling for me at their dark Stand - the only time idle would enter my head over the next four days.

But the light?  That New York light?  Like an intake of breath, it fights to be let loose on the day.

The light burnishes treetops and brick building-tops in Queens as we speed along the Long Island Expressway.  That light, brightening the dark, casting the gravestones alongside the Expressway in shades of gray, light then lighter, before giving way to the fake bright fluorescent of the midtown tunnel, its tiles artificially yellow.  Speeding out of the tunnel, to the first real sight of Manhattan.  The light brighter now, of course it's brighter now.  Pricking out the buildings ahead.

Is that the top of the Empire State Building?  Catching that beautiful New York light?

The light -- the light's magic in Manhattan.  After you check your bags with the bellhop, you need to get back into that light.  The red awnings of the Cartier building, rich in the dawn -- drawn to them, then around the corner to the flags flapping on Fifth Avenue, into more light, that light making the flagpoles gleam. 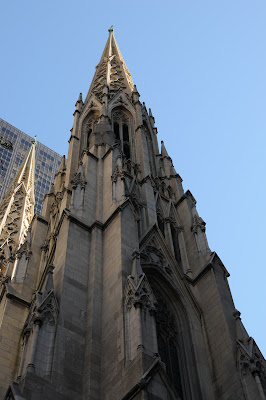 A cathedral there, just there.  St. Patrick's?  Lord, is that St. Patrick's Cathedral?  Its spires soaring into the bright?


And across the street, Atlas holding the world on his shoulders in front of Rockefeller Center.  A glossy Atlas there, St. Patrick here.

When the cornerstone was laid for St. Patrick's, it was practically in the wilderness - no idea, none, of the energy that would come and surround it.  The energy -- and the noise, from cars, whistles, shouted conversations.

Patrick calls, open my door.  His light gentler inside, cooler, and as the door closes, the New York music outside is replaced by the music inside, a mass in progress.  The nave, its columns soaring like the spires soared outside.  Not many parishioners in the pews, but so many New Yorkers rushing into the cool, the relative quiet of the cathedral.  Businessmen and businesswomen, in amazing suits, police officers, construction workers, firefighters.  All rushing in through those doors but immediately slowing, slowing and dipping their fingers in the marble font of water, doing their cross, genuflecting -- bending their right knees until they touch the ground, always the right knee.  Then standing, pausing for a moment at the start of their busy New York day, before rushing back into the light.

I stand there, gaping, then drift around the pews.  The stained-glass brilliance of the light washing over me as I pass by altar after altar -- until I come upon St. Anthony.  I pause at his altar, put flame to candle, do my cross there in front of all that flickering, and think of my dad.  More than seven months now.  How could seven months have passed?

Ambling by other altars -- and I find St. Elizabeth.  There I'll set three votives alight.  For Yia Yia, for my oldest -- and for Kristina, too.  The light I've lit reminds me of all the light outside in the Manhattan morning.﻿

Park Avenue is a magnet, drawing you forward, forward.  Taxis honk and people swarm, the air is charged, there's so much electricity everywhere I know if I rubbed my feet on the carpet inside the Waldorf and touched Karen's shoulder we'd both explode.  And there, over that highrise, what's topping that highrise? 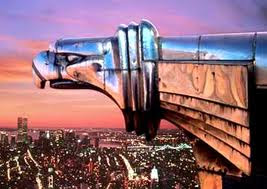 Walk fast, like everyone else, walk fast until -- the Chrysler Building.  Just across the street.  It's the most beautiful building you've ever seen, will ever see.  Tomorrow you'll see it from the Empire State -- actually look down on it.  But this morning all you do is look up at the perfect meld of light and building as the sun strikes the chrome of the massive gargoyles overhead, sparking off them so bright you can't stare too long into the spark.  High up high in all that light are the angry eagles jutting out from the triangular sunbursts above.

But for the first time you notice other gargoyles about halfway up, huge, chrome -- just wings, you think.  Elegant, chrome wings.  Until it dawns on you -- they're radiator caps.  You know what Art Deco radiator caps look like because in the past you've tried to buy them.

You've tried, but you can't afford them.  Who knew that radiator caps and hood ornaments had entered the realm of highly-collectible?  You just thought they looked cool.

You and a bunch of other people.﻿ 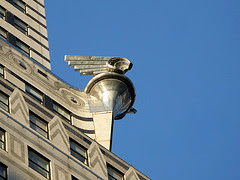 And here they are on a scale you've never imagined, catching east coast light, sharpening it, polishing it to an unthinkable sheen.

New York Light.  Looking up, you'd thought you'd seen all the lustrous light Manhattan had to offer.  But you turn around, look down 42nd Street and see the southern facade of Grand Central Station and its majestic clock-face of Tiffany glass, Tiffany just radiant in the sun.

Grand Central must be as beautiful inside as any cathedral, yes?

Again, you're stunned by the size.  The scope.  And the people -- again, the people.  You've never looked at clothes in your life, not really.  I mean, remember what Ray said?  And he was right, wasn't he?  But here, the clothes are chic -- you never knew what that word meant.  It's like hearing people use the word awesome when they've never been inspired by awe in their lives.  The shrimp at the Red Lobster can't be awesome, ok?  Sex and the City -- not awesome, can we just agree about that?  Please don't use the word until you've been good and truly awed.

But now that you've seen chic you can use chic, and here, in New York?  You're taken by the chic clothes -- boots snaking up slim hips, almost meeting the short skirt at high-thigh; men's shoes, clunky black, starched shirts, bright white -- worn by the commuters pouring into Grand Central, arriving by foot, bus, subway and train.

The outfits, you're so taken by the outfits, the clothes, until you turn around, and there it is again, that light.  Streaming through the window, raking across the terminal-- 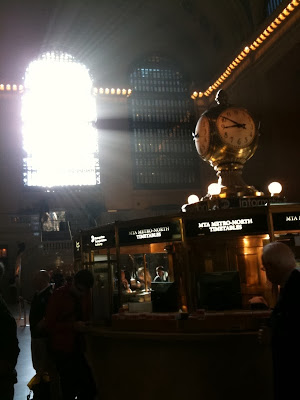 --that light.  Shining on the motes in the concourse.

But by looking up, you've paused.

--and all these commuters the current surging past.  That's when you glance down.

What's with your shoes?  You've never noticed before -- they look like grey suede, nubby and rough.  They're supposed to be black leather.  How'd they get so old and worn without you even noticing?  But you notice in New York.

You leave Grand Central and immediately see a shoe-shine shop.  A woman and two men sit there, high in their leather thrones.  You take a seat next to the man reading the Post, gleaning info on Brett Favre and the the pictures he sent to a cheerleader.

Not your mother's pictures.

The boot-black says nothing to you, but he looks at your shoes, your sad, worn shoes, and he looks up at you with an are-you-shittin-me expression.  He doesn't voice it, not like the Zippo seller in Times Square, but his look is almost louder.  You tell him -- I know, I know.  Just do your best.

And he works at it as you read the Post that the guy leaves behind.  Read about the gubernatorial race -- Cuomo vs. Paladino. Paladino leveling charges that Cuomo's sexual prowess is legendary.

Hard to find any news about the your west coast Giants.

The boot-black's been working em over, your shoes, and he still doesn't say anything, but he snaps at them with his towel and with his other hand gives your shoes a matador's flourish.  They've been transformed, black leather again - smooth and supple.  And he's still not talking, but he smiles big.

Turns out the shine cost three bucks, so you pay that, but tip the matador seven - the remainder from the sawbuck you handed down, and rush back out into the light.

In that light, your shoes shine in New York like never before
.

Grand Central.  The Waldorf Astoria.  Cartier.  Saks Fifth Avenue.  The Chrysler Building.  Empire State.  St. Patrick's Cathedral.  Park Ave.  I mean, I've walked by all that shit, and got the best shoe shine of my life, since landing?