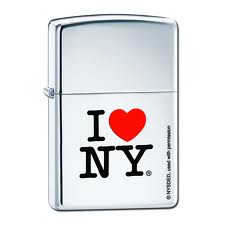 I've gotten a little weird about Zippo lighters.  I don't travel much, but when I do, my memento is often a Zippo.  The weird part?  Since the first Zippo was made in 1933, there's always been an indicator on the bottom of the lighter showing its year of production.  Early on, patent numbers told you the when.  Since then, it's been a confusing progression of dots, slashes, roman numerals.

I know, I know.  I shouldn't be versed in this.  It's because of my dad, but you probably knew it'd go back to my dad.  When I received one of his two Zippos, back from when he smoked - Lucky Strikes -  I wanted to know the when, and discovered the key to the when was in my hand.  His had the five barrel hinge with the 2517191 patent number.  That placed it in 1953, when my dad was still in college.

I love having that lighter.

ANYWAY.  Not only do I like to take home a Zippo from my visits, I prefer it to have been manufactured in the year I made the visit.  Again - I know, I know.  But these are the things I worry about.

So we're in Times Square, about to see West Side Story in the Palace Theater, right there on Broadway.  How cool is that?  While Karen wants to grab her seat, I need a Coke.  This is Day 2, and I've been running on fumes.  Caffeine'll help.

After standing in the cattle crossing at the McDonald's on Times Square - lord, the people.  You've been to New York.  You knew about all the people.  I thought I knew.  I didn't know.

So I down my Diet, and in between the Golden Arches and the Theater is one of those tchotchke shops.  Lotta chrome, lotta glass.  Selling cameras and postcards and snow-globes (snow-globes are on the TSA's list of prohibited items.  More on that later) and mini Lady-Liberties and, of course, a revolving case full of Zippos.

Which design, though?  The one with the Empire State Building?  The Statue?  A taxi?  So many choices.  And of course, I have to check the bottom.  The year-indicator has gotten streamlined.  Since 2000, 00 on the bottom right stands for 2000, 01 for 2001 and so on.  There's a letter on the left that corresponds to the month.  A for January, etc.

I ask to see the Zippo with the Chrysler Building.  Oh, that's a sweet building.  And the guy behind the counter - little bald guy who needs a shave - opens the case and hands it to me.  I pop it out of its holder, scritch my nail across the engraving of that ridiculously beautiful art deco stunner - did I mention that the Chrysler is a sweet skyscraper?  Maybe the sweetest of all?

So close and yet so far.

I'm running out of time.  The Sharks and the Jets are getting ready to rumble at eight o'clock and that's just a few minutes away, so I pop the Zippo back into its holder - don't really have time to look at any of the others - and I tell the bald guy across the counter, thanks.

He looks at me like I just pissed in the punchbowl at his mother's birthday party.  Are you shittin me? he says.

Pardon? I say right back.

You're not going to buy it? he says.

No, I say.  And now I'm thinking I should really get going.  Karen's waiting for me inside the theater.  So's Tony, so's Maria.

I got it out of the case for you, he says, and now he's kind of New York mad.  I can't quite tell how serious New Yorkers are when they get like this.  I'm trying not to go all California soft and just buy the lighter.  I want a 10, ok.  I just do.

Can I ask you a question? and now the guy is tapping the Zippo against the glass case between us.  Tapping it hard.

I just got a question for you, is all.  TapTapTap.  What the fuck?

So I explain.  About Zippo.  And their dots and dashes.  And he just looks at me as I talk.

You're telling me, he says, TapTapTap, that if I look under this Zippo right here, TapTapTap, I'm going to see 08?

On the right side, yes, I say.  I hadn't explained about the letters and their relation to the months in a year and I figured this wasn't the time to introduce that particular topic so I just stopped there, at yes.

He's fidgeting, my bald guy, TapTapTap, and he tugs his collar twice, and then without looking down he pops the Zippo out of its holder.

Did I mention the guy had a pair of glasses hanging around his neck?  By a silver chain?  He takes those glasses and perches them on the end of his nose and he brings the Zippo close.

And he holds that pose for a three-count, as other customers throng, picking up shot glasses, foam Statue-of-Liberty crowns, he stands there as customers pick up snow-globes, pick them up and shake them to make the shiny flecks swirl in the water, swirl around a tiny Empire State building with an even tinier King Kong making his way to the top.

His shoulders slump a little as he focuses even more - then he puts the Zippo down on the glass, all quiet.

You know what? he says to me.

I never knew that, he says.  You're telling me this one here - and he points to a Zippo with a Yankees logo - is going to have numbers?  Maybe 07, maybe 09?  And that'll tell me what year it was made?

I never knew that, he says again.

He puts it back in its holder with a gentleness I wouldn't have ascribed to him, and I take that as my cue to skidoo.

Karen's in her seat, and she's got another Diet Coke waiting for me.  Broadway shows, they sell clear plastic cups with red lids, the name of the show also in red. Our girls will love these cups later, and I'm loving another Diet right now.  I'll score my Zippo after the show, at another shop down 47th.  When I see it, I'll know it's the one.  I mean, I ♥ New York?  That image we all know?  First used in 1977 when Times Square was still a pit?  Used to entice tourists to visit the city that never sleeps?

I know before I look that it'll have the 10 underneath.  I mean, it has to, right?  It'll have the 10 on the right, and an F on the left.  The F indicating that the lighter was made in June.