Through some trick of how I process what I read, the first book that I encounter from a particular author invariably turns out to be my favorite.  I can love the books that follow, but for me, there's just something about the first.

That said, by all rights my favorite book by Andrew Sean Greer should be The Confessions of Max Tivoli.  It's not Mr. Greer's first novel, but it's the first one I read, and so that should still be #1.

I just finished his newest novel, Less, and it's breathtaking.  You have to wait until the summer before it's released - so please, mark your calendars now for July 18th.

There's so much to love about this novel - not the least of which, of course, is its protagonist, Arthur Less.  And not just because Arthur is turning 50, as I just did, with all the baggage that number has to offer, but it's because Arthur, like many of us, is trying to do what's right for himself and for those he loves - and is making a mess of it like we're prone to do.

You'll read the novel for the brilliant way Mr. Greer makes his words leap from the page - there's a description of Arthur's older lover, receiving the phone call that let's him know he's won the Pulitzer Prize for Poetry, and you'll reread that passage for the sheer energy and joy of the words.  If you're one of those people who underlines favorite passages, don't bother - it will become impossible to see the words for all the underlining.

Mr. Greer's novel is seemingly structured effortlessly, but each line is so pure, so crystalline in its placement, that any attempt to remove one would shatter it all.

For Arthur's cocktail, it was easy to pick champagne as a start, because he and others drink it throughout.  Towards the end, when the clock is close to striking 50 for him, it's already struck for a friend, and she's drinking marc, a French pomace brandy.  It reminds her of times past, so that was a natural addition.  (And though I didn't have any French marc lying about, I did have the Cretan version, tsikoudia, and that was closer to what I wanted to use - marc de gewürztraminer - because both of these are clear whereas regular French marc is aged in wood and becomes tawny.  I didn't want tawny, I wanted clear.  So.

And, most importantly, Arthur's friend then asks the question at the heart of the novel, What is Love?  And bless her if she didn't also, then, name our drink. 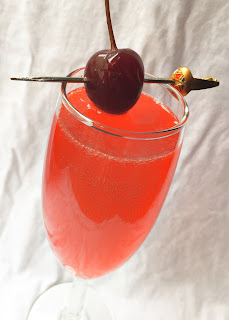 Because Love's in the air and on the page - and especially because of the comment made late in the book ("Elegant Parisian women in black and gray sip garishly colored American cocktails that even a sorority girl would not order.") - I knew I had to give Mr. Greer exactly that, so I went with grenadine, the color of romance.  So sip this and (egad, I thought I would make it through without resorting to the most obvious cliche, but here it is anyway) you'll agree that Less is indeed more.

Postcript:  This evening I was lucky enough to attend a dinner celebrating two novels not yet released.  One was Mr. Greer's Less.  When I admitted to him, after too much wine, that the inspiration for his cocktail was partly just throwing a stick of dynamite at a French 75 and then, like Dr. Frankenstein, reconstructing it with found parts, Mr. Greer smiled, big.  "The French 75 is my favorite cocktail," he said.  Which made me think that the direction I took was the right one.

Combine the marc, lemon juice, and grenadine in a shaker filled with ice.  Shake.  Strain into a champagne flute.  Top with champagne and garnish with the cherry.  Sword is optional.