The first time I met Michelle Richmond was around the time her debut - The Year of Fog - arrived.  Ten years?  At least.  Have you read that one?  Go read that one.  I was a newish father when I was introduced to it - and it was an incredibly difficult read for that reason - but Ms. Richmond's prose is so rich, the story (about the disappearance of a child) so brutally seductive, that it's grip won't loosen until you're done.

So go read that because you'll have to wait until July for her latest novel, The Marriage Pact. 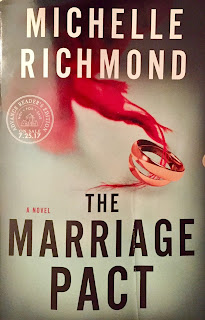 The Marriage Pact is deliciously creepy with ominous tidbits strewn artfully about that make you immediately worried for Alice and Jake.  Newly married, deliriously happy (at least Jake is - Alice is more guarded.  Happy?  Yes.  Verdict is out on the delirious thing).  Each is successful in their professions.  They live in the Bay Area, so they also have that going for them.  Happy days, right?

But then there's the Pact.

They're invited to join a jet-setting community of interesting souls who all share one thing:  they want their marriages to be successful.  What's the harm in that?

Did I mention the ominous tidbits?  The bracelet Alice is forced to wear because some members of the Pact question her commitment?  The warning Jake receives from an old friend about the dangers of the Pact, and oh yeah, he notices a nasty and fresh wound that she tries to hide?

Did I mention that the novel begins with Jake regaining consciousness, bloodied, the only passenger on a plane headed back to the bay area?  So yes, there's all that.

Time for a drink?  I think so.

Ms. Richmond was kind enough to comment on an earlier post and, because that cocktail had chocolate and heavy cream, she was all in.  Which gave me an inkling for where I might head for her own drink - and I ended up going there and then, perhaps, I went a little further (cue atmospheric / haunting music).

The woman who gives Alice the bracelet is caught off guard when, while she's introducing Alice and Jake to the idea of the Pact, they ask her to answer one of her own questions.  What's your favorite drink?  Vivian responds without hesitation:  Green Spot Irish Whiskey, 12 year, neat. 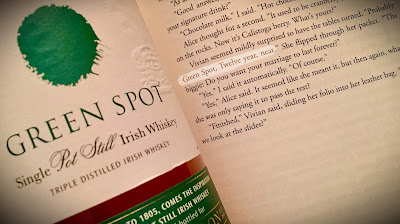 Ok, I have a bottle of Green Spot at home, but it ain't the 12 year.  I think they only bottled two hundred of those and they are long since gone for a very princely sum.  But I can work with it, because the Green Spot I have is good.

The bracelet I mentioned earlier?  Alice is told it'll be monitoring her, and so Jake lies and speaks into it, saying that he was so happy that Alice brought him vanilla bean ice cream (the lie being that he bought it for himself).  Vanilla bean ice cream?  Hmm.  Did Ms. Richmond indicate that she liked an earlier concoction of mine because of the heavy cream?

Are we seeing a trend?

More importantly, can I mix good whiskey with ice cream?  Of course I can.  Grab a spoon kids, and get ready for a Richmond Float. 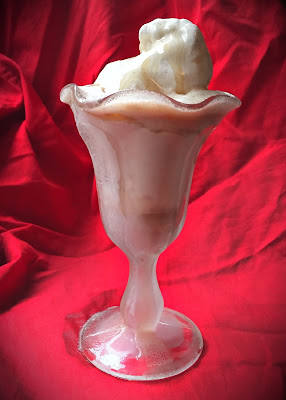 Set aside one cup of the cream in a metal bowl.  Place it in a container filled with ice water.
In a medium saucepan, combine the remaining cream, the milk, the vanilla bean, the sugar, and the salt.  Heat on medium until the sugar is incorporated and it just begins to boil.
Remove from heat.  Let sit, covered, for one hour.
Finely strain this mixture into the chilled cup of cream.
Add the whiskey and refrigerate for three hours.
Process in your ice cream maker.