It's about time to get back on the drinking horse - not that there's any one particular reason for that.  Nope, not at all.  Why would you think that I would particularly need a drink right about now?

My first book, then, for this, the Year of the Drink, is Shanthi Sekaran's Lucky Boy. 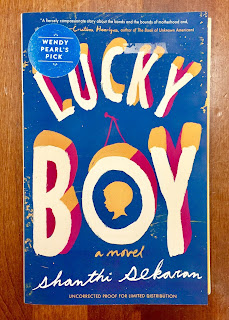 I had the good fortune to introduce Ms. Sekaran at a lunch kicking off the NCIBA's Discovery Show last fall.  We had a stellar lineup at that Buzz Lunch - all the books were amazing - so it was easy to select Lucky Boy, one of the first releases of the year, to kick off our 2017 newsletter

In Lucky Boy, you're introduced to Soli, who comes to the US across our Southern Border - oh, wait.  Does that make this book especially timely considering the events of the past few days?  Gosh, it does.  Does Ms. Sekaran also give a very real face to the people who are being used as the boogeyman-of-the-moment?  Well, yes, she does that, too.  It would behoove anyone who has questions about the reasons that compel some to enter our country by any means possible to read Lucky Boy.  It's a story that forces you to consider judgments that are all too easy to make.

The power of novels is simple - they compel you to spend hours with people and watch them make decisions you've never had to face, which in turn can make you think about the challenges in the lives of others.

We call that empathy, a quality that sometimes can be in short supply.

Anyway.  Please read Lucky Boy.  Like I said, you'll meet Soli, who, soon after her arrival in the States, will give birth to the lucky boy of the book's title.  Unfortunately, circumstances will cause her to be separated from her child by social services.

When this occurs, we've already met Kavya, an Indian woman living in Berkeley who desperately wants to have a child but is unable to conceive.  She and her husband will become foster parents for Ignacio.  The novel traces the paths of these two women - both wanting to be the mother of the same little boy.

The novel is heartbreaking - there isn't an answer that can make both Soli and Kavya happy.  That made me decide that a lot of alcohol was called for, so I went about creating a punch and began looking to the novel for its ingredients.


I begin with Soli, and when she meets the husband of the family she's a housekeeper for, he tries to ingratiate himself by speaking Spanish even faster than she can.  He also mentions that he has backpacked near where she is from, in Southern Mexico, and he thought the mezcal there was something else - so I'll start with that.  Also during that fist conversation, he's eating a scone rich with red berries, so our ingredients are coming along nicely.

Then, to Kavya.  Early on, she takes a new job cooking for a Berkeley sorority, and while she does have to field concerns about the amount of garlic in one of her dishes, I've not been able to yummily incorporate garlic into a cocktail.

Thankfully, she also works with plenty of lemons, so I know that they'll take part, too.

Finally, there's a party scene where Kavya is being grilled about the fact that she doesn't have a baby, that she's not getting pregnant, and when she can't take it anymore she runs from that group and to another, these women all in black, and one of them acknowledges Kavya's frustration by saluting her with a fresh glass of prosecco.  So we'll finish with that, especially since Kavya and her husband take a bottle of prosecco with them on a trip to Calistoga.  Clearly, it's something she would approve of.

I hope you approve of this. 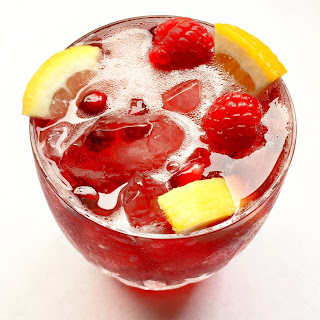 Muddle and then strain ½ cup of the raspberries and a ¼ cup of the pomegranate seeds.  Combine this juice with the rest of the ingredients - except the Prosecco - in a large pitcher or bowl and refrigerate overnight.

Ladle or pour into cups.  When serving, top with the Prosecco.