I don't often post multiple recipes on the same day, but I'm exceedingly fortunate to meet two authors this evening, along with the inimitable Lee Boudreaux, who just so happens to be VP and Editorial Director of Lee Boudreaux Books - the publisher of the novels we'll be celebrating tonight.  I already told you about the new work from Andrew Sean Greer, now it's on to the Spoils. 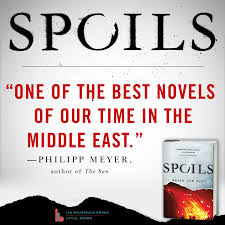 Spoils is the debut novel from Brian Van Reet.  Mr. Van Reet interrupted his schooling after September 11th, 2001, to enlist in the US Army.  He was awarded the Bronze Star for Valor as a result of his service as a tank crewman in Iraq.  And although war is devastating, and it's often difficult to see what good can come of it, I'm thankful that after his Honorable Discharge, Mr. Van Reet focused on writing.  Spoils is the culmination of his very long journey from America to Iraq and back again.

With his novel, Mr. Van Reet gives you the boots-on-the-ground view during the war in Iraq.  He doesn’t take sides – he ventures into much more difficult terrain by showing the war through both prisms, American and Iraqi.  The result is disturbing and grave.  Spoils is a powerful examination of the costs of war, both on a country and the people fighting for it.

Looking for inspiration for what to put into a drink for his book, I started with Abu Al-Hool, a mujahedeen with a past he'd like to forget - his passive father, who didn't believe that political power grew out of the barrel of a gun, but rather was something that a good martini could help bring about.  So I'd start there.  A martini is always a good place to start.  Then, everyone's drinking coffee - American and Iraqi - so I wanted that to play a part.

There's a calm-before-the-storm moment when Cassandra, the teenage gunner on an American Humvee, witnesses a group of Iraqi children happy to receive rations - especially chocolate - from the Americans in their country.  Chocolate, then, to round everything out.

Those ingredients create the Spoils of War.  Close to a White Russian, which seemed weirdly ok - though the Dude might not approve of how strong the Spoils actually is. 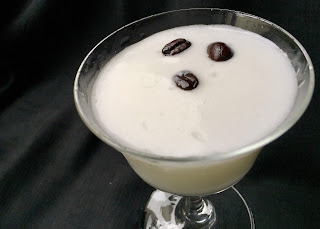 Add the gin to the ganache.  Stir with ice.  Strain into a chilled glass and garnish with the coffee beans.

Heat the cream and add the salt and coffee.  Add this, while hot, to the chopped chocolate, vanilla, and vodka.  Stir until smooth - adding heat if needed.  Refrigerate overnight.