A coyote laughs at Joe 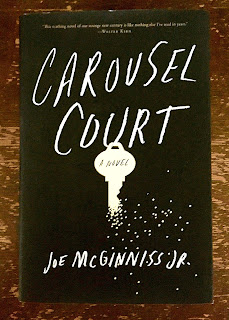 It begins with a letter and ends with a drink.  There's some reading and mixing in between those two, but there's your Alpha, there's your Omega.

The letter would introduce me to the new novel by Joe McGinniss Jr.  That novel, Carousel Court, is bleak and powerful - if I could get away with it, I'd also say it was au courant, but I can't get away with dropping French phrases into my writing, so I'll just say it confronts issues that will resonate with you right now.


I hope that I would have found the book on my own, but there are just too many books every year, and I want to read them all but of course I can't.

Time's a cruel, limiting bastard, and we're left to make our own choices on how to use it.  Sometimes, though, that choice is made for us - and if we're lucky, the choice is a good one.  Enter People's Exhibit #1, the Letter. 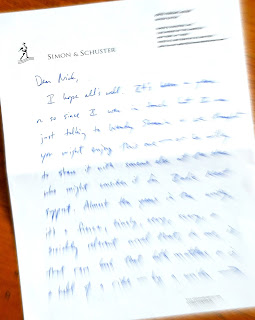 Every writer wants a great editor (at least any smart writer does).  Who wouldn't want Maxwell Perkins to encourage you in dark times?  To bring out the best you have to offer.  To sing your praises if you feel uncomfortable doing that yourself - or to try and keep you from singing too loud if you're often off-key.

That's where the Letter comes in.  Jofie Ferrari-Adler is one of the best editors in New York, and yet he took the time to write me a note because he knew how good Carousel Court was.  Knew that it was so good he wrote to a bookseller 3,000 miles away just to say - maybe don't miss this one.

We're all busy, right?  But when a book's personal solicitation lands on your desk, you might take more notice than if the book came in a bundle.  Don't get me wrong.  When booksellers get a box of advance copies, we pick through them like crows picking at shiny objects on a blacktop.  But a handwritten note?  In this age of email?  It'll get my attention and should get yours, too.

It helps, of course, when the editor is correct - and in the case of Carousel Court, it was everything he promised.  In Mr. Ferrari-Adler's words, the novel is "fierce, timely, sexy and scary."

Imagine a young couple back east giving up the security of their jobs and their homes because one of them gets an offer too good to be true on the West Coast.  And then imagine that job falling through before they've even left.

That's the conundrum for Nick and Phoebe, but they decide to try and leave behind the scars they've inflicted on themselves and head west for a new start.  Part of that start is pouring every penny of their savings into buying a house in Southern California.  They'll load it up with every amenity - granite counters, an indoor rock climbing wall, an outdoor pool - so that when they flip the house, the payout will be huge.

What could go wrong?

Besides the housing bubble bursting that summer?

Mr. McGinniss Jr. uses the weather in Southern California to set the tone.  The heat's "insane."  "The sun's a beast," it's "blistering."  And in this unrelenting environment, there's smoke everywhere and the threat of wildfires everyday.

We've been prepped for this, though, because the author let us know that the second time Nick took Phoebe out, it was the hottest day of the year.  So they've been in the fire since they began.

All the heat, of course, is enough to make you thirsty, and that's when I start looking for clues, for what the cocktail's going to be.  Early in the novel, we watch as Phoebe texts her mentor, a man who's given and taken much from her.  She's fantasizing about what he's wearing, what he's eating, and what he's drinking.  A mint julep, perhaps?

There's a lot more booze in Carousel Court, from vodka, beer and wine, to martinis, mimosas and mojitos.  And the mojitos?  They come to mind when Phoebe remembers her orientation from six years before.  Phoebe will be selling drugs, to doctors, and a happy doctor, she's told as the mojitos keep getting poured, will prescribe her drugs to his patients.  And that was the lesson.  Keep your doctors happy and you'll keep your bosses happy.

So those late-night mojitos resonated.  While they were from her Past, they haunted Phoebe in her Now.  But a mojito is too refreshing, and in this novel, with threats everywhere - from fires, homicides, and home invasions - a mojito was too soft.  If ever a book demanded a stiff drink, Carousel Court was it.

I'd steal the lime out of the mojito and throw it in with - what?  Two of the threats that run throughout the novel are the fires and the suffocating heat.  From their early date, on the hottest day of the year, to the end of their current summer, where they find themselves fighting and lost during the hottest week since they arrived in California, the heat's everywhere.  Wildfires in nearby canyons, with the wind carrying that smoke - and smoke from joints and cigarettes, even from next door where their neighbor sets fire to his couch.  So I'd add the lime to some smoke, and the easiest place to find smoke is in any number of wonderful scotches.

Have I mentioned that Carousel Court is published by Simon & Schuster?  And that one of my favorite reps just happens to be from Simon?  And that we enjoyed Laphroaig one night after an event because it's Cheri's favorite?  And that Laphroaig is good and smoky?  So I'm using that.


Years ago, in Esquire, David Wondrich wrote that the correct proportions for a scotch and lime were three ounces of blended scotch to half an ounce of lime.  Mr. Wondrich?  I'll ask that you not mind too much that I'm going with a single malt, not a blend.  I hope you'll trust me.

I'm also going to flame a lime peel because in for a penny, in for a pound - and there's just so much smoke in this book that I want more of it in the drink, too.  When Nick and Phoebe first meet, he's lamenting his apartment, his life, and he wonders if he shouldn't just burn it down and start over.  Later, while Nick's out working (for his employer - EverythingMustGo - he and his crew clear out foreclosed houses of everything inside so that the bank can clean them up and start over) someone thinks that instead of going to work on the house, they ought to burn the place down.  And finally, finding themselves underwater, Phoebe's thinking about their own home and asks Nick:  "Tell me again why we can't burn it down?"

So that's why we're flaming the peel.

That still leaves me without a name, though - but here again, Mr. McGinniss Jr. does not disappoint.  I love when an author gives me the name of their cocktail, and, late one night, he does just that when Nick walks home through a wind that's hot and electric.  When he hears coyotes, he thinks they aren't so much howling as they are laughing, and if a laughing coyote isn't a perfect name for a cocktail, well, I don't know what is.

This isn't going to be a coyote like the four that will block Phoebe's path late on another night, growling, as she holds her young son in her arms, the coyotes growling and hungry - before gunshots crack the night, gunshots from their neighbor who sleeps in a tent on his front lawn, waiting for just such a moment that allows him to make coyotes bleed under a Southern California moon.  No, that's not the kind of coyote we want.  Not outwardly menacing.

But laughing.  Which just might be worse.  I have a feeling though, that, like Nick, after he's destroyed everything he could, you'll feel satisfaction in the moment.

Stir scotch, lime juice, and bitters with ice.  Strain into an ice-filled old-fashioned glass.  Cut a round coin of lime peel.  Hold a lit match over the cocktail.  Squeeze the peel over the match.  Rub the peel around the rim of the glass.  Garnish with the lime wedge.