(This post, originally published on 11/08/16, has been updated with new information on 11/09/16.  What has been added is italicized - anything deleted has been struck-through)

Soon, our long, national nightmare will be over just be getting started.  After the election results are in tonight, I know I'll need a drink - and yes, I'll be having a Nasty Woman.  I prefer this to the Mazel Tov Cocktail (what a wonder, that both of these drink names should be lobbed at the country during the course of the campaign by the most unqualified candidate in the history of these United States and/or by his idiot advisers) only because I'm not in the mood for Manischewitz or Slivovitz.  Sue me.

Actually, I take that back.  It sounds like lots of people will be getting sued starting tomorrow, and I don't want to throw my name into the mix like the winner of last night's election who is involved in a civil fraud trial with relation to Trump University that is set to commence in just two weeks.

For the Nasty Woman, we're going to start with that bad hombre, tequila, because naturally I would've used Trump Wine since there isn't a worse hombre than Donald "I'm an Idiot, Sad" Trump, but his wine has been called Botox-y and pungent, so no.  And then, and then...

Well, there are certain men who only credit woman with being first one time in the history of the world.  And that would be for...wait for it...

Yup, these guys like Donald "I'm an Idiot, Sad" Trump will give women credit for that, and not much else, so travel back with me to that dangerous Garden - and what was it that caused Eve to get us guys expelled from paradise?  That Goddamn apple.

I figure it's ok to say Goddamn in this instance because, well, He did, didn't he?  Also, today, I could give a fuck.

So, I'm going to add some apple to the hombre who already resides in our glass, and apple brandy does the trick. because we need as much alcohol in this cocktail as possible.

Things, though, get a little tricky when we talk about apples in the Garden, because according to many biblical scholars, the apple in the Garden was actually a pomegranate - which is just fine by me because grenadine (real grenadine) is made from pomegranates, and now I'm picturing myself seeding the crushed ice in our Nasty Woman with plump, juicy pomegranate seeds because they're tasty and it'll look fabulous and we'll add grenadine to make this SOB go down easy because we're gonna need more than one.

Are you with me?  Good.  Let's get to it. because I don't remember the last time I needed a drink as bad as right now.  Maybe that time they had to saw my leg off in the Civil War.... 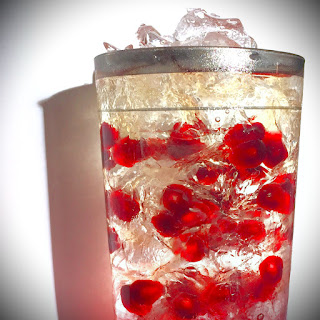 Combine tequila, apple brandy, and bitters.  Stir until cold.  Layer a collins glass with ice, seeding the ice with pomegranates as you go.  Carefully pour in the grenadine, then add the tequila-brandy-bitters mix.  Top with soda water.  Then, toast our country and wish for better things for all of us.