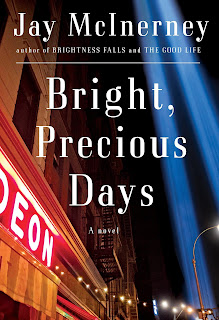 When Jay McInerney's Bright, Precious Days was released this month, my only regret was that I wasn't creating cocktails for novels as earnestly in 2006 as I am now.  In '06, I was lucky enough to host Mr. McInerney in my store, but I didn't have a cocktail to toast him with, a cocktail to celebrate the release of The Good Life.

While I wasn't able to have the privilege of Mr. McInerney's presence in the store this go around, I do have a cocktail, the Carrie Starr. The drink's genesis was a scene in the book where two couples find themselves in a secret restaurant in New York - secret like speakeasies were when they first came back on the scene; think New York's PDT or San Francisco's Bourbon and Branch.

So, Russell and Corrine (last seen in The Good Life) are on a double date, and some of the foursome are more adventurous eaters than others.  It is, after all, New York, and shirako is on the menu, so if you're the one feeling adventurous and if you've ever had a hankering for fish sperm, then you simply have to find yourself a secret restaurant that'll prepare it for you.

One of the cocktails on the menu that night was the Rudyard Kipling.  This is an East meets West drink - bourbon mixed with Umeshu, a Japanese plum liqueur.  Kipling, in The Ballad of East and West, wrote that the two would never meet (as they do in this drink).  His poem begins and ends with:

0h, East is East, and West is West, and never the twain shall meet, Till Earth and Sky stand presently at God's great Judgment Seat;
But there is neither East nor West, Border, nor Breed, nor Birth,
When two strong men stand face to face, though they come from the ends of the earth!

I'm not often presented with a cocktail to play with inside the pages of the books I'm reading, so I jumped at the chance to twiddle with this one.  I don't know Mr. McInerney personally (if you do, please ask!), and wasn't able to determine if the drink is one he concocted or if it came from some fabulous New York joint - so I'll just say the inspiration was his and I messed with it, absolving Mr. McInerney of all blame.

Messing with it meant leaving out the bourbon and using gin.  Kipling, born in British India, was quite the Englishman and what finer English liquor is there than gin?  Gin, though, seems in this setting to make the drink more feminine than it was with the bourbon, so I thought it was better to name it not for Kipling, but for his wife, Carrie Starr.

So, please, go get the book, mix yourself a drink, and enjoy. 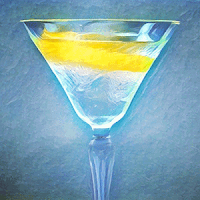 Line a chilled cocktail glass with the ume peel.  Stir the gin and Umeshu with ice.  Strain into the glass.  Dash with the bitters.
Posted by Nicky P. at 2:54 AM