Chris Cleave's Everyone Brave is Forgiven


Because this post is more self-serving than most, I must first implore you - if time is of the essence, skip this and just go and purchase Everyone Brave is Forgiven, the new novel by Chris Cleave that was released today.

I'm not joking - just go.  These words will be here when you get back.

Ok - this then is for those who already have the book in their hands.  Good on you. 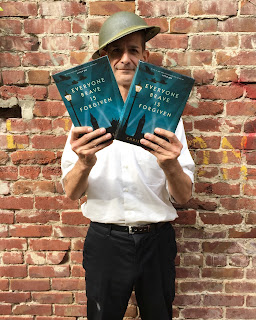 Every vocation has its perks.  Bookselling is no different.  Each day, new books come in the door.  Each day, new authors and old are vying for attention - which, of course, if you're a reader, would be heard as a little shout from heaven.

The only potential problem is the sheer weight of the words.  Was it Coleridge who was supposed to have been the last person to have read every book available to him?  Impossible now, of course - and during any week in a bookstore one can feel - sometimes - the burden.  There simply aren't enough hours.  It's like having the barkeep from The Waste Land interrupt your day with HURRY UP PLEASE ITS TIME.

I know it's time.  And I know there's never enough of it.  I know there are thousands of books I'll never get to - so deciding what to read can itself become burdensome.

Because so much constantly vies for our attention - family, friends, work, music, movies, status updates - publishers sometimes go out of their way to grab you by the lapels.  Buttons will arrive with books.  We're sent pens, flashlights, sunglasses (hint to publishers - chocolate always works). 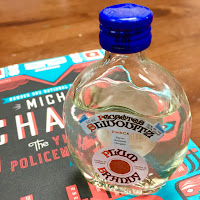 We've gotten a pie.  That was a good one.  Heck, once I was sent some booze.  God bless Michael Chabon's PR team.

We're always receiving letters.  Testimonials from the editor who picked up a book that arrived over the transom and was then up until three in the morning because the submission was so good.  The brief notes explaining that even though we might not usually pick up a book in a particular genre, we should crack open this one because it's so special.

The only problem with the letters again has something to do with volume.  I would love - love - to be able to read each book where an editor or publisher took the time to write a pitch.

It's just that there are so many.  Books and letters.

Publishers try their tricks.  We get letters with our names at the top - as if they're written to us, like something from Publishers Clearing House.  They're not, of course, how could they be?  Like last September when I received a package from Marysue Rucci.  She happens to be Vice President and Editor-In-Chief of Simon & Schuster.  It was an advance copy of Chris Cleave's Not-Yet-Released novel.  Lucky me, he happens to be a favorite author of mine.  Have you read Little Bee?  Incendiary?  Gold?

So - I saw the "Dear Nick" at the top of her letter, poking out of the book, just under the S & S logo, and I thought, Wouldn't that be nice!

But then I saw other pages - a long author's note and something handwritten on Chris Cleave letterhead.  That second note - I thought it was done up like some junk mail companies do, using faux handwriting to make you think that a person wrote the letter, when of course they didn't - haven't I already said, How could they?

At this point I'm thinking - what an extravagant ruse, especially since no arm-twisting is necessary when it comes to a new novel by Mr. Cleave.  But then I saw a mention of my blog in the fake letter, and that's when I turned the letter over and noticed some of the ink had bled through the page.  I felt the bumps on the underside where the pen had made indentations...

I went back to the letter from Ms. Rucci, and it wasn't quite what I thought it was.  She explained that she could wax on about the powerful novel she had sent me, but instead she was passing on a note from Mr. Cleave.  And then she signed off with her thanks.

This was, to quote Monty Python, something completely different.

Mr. Cleave's note was warm and funny.  He let me know that his first novel was titled Tequila Mockingbird and that he was honoring me by not including it.  He hoped I might have time to read his latest and he too signed off.

I do not often receive letters from Editors-In-Chief or from authors I admire, and I'm easily flattered, so to receive both in the same package...

I immediately set to reading.  One worry I had was, What if I didn't like it?  To quote my nine-year-old, Awkward.

But did I mention that the author was Chris Cleave? And that I shouldn't have worried?

When I began reading, it was like I was in a movie theater and someone dimmed the lights.  All distractions went away, hidden by the dark that descended, and suddenly I was on Mont-Choisi, skiing down the slope with Mary North, finally given a good reason to be rid of finishing school.  It's September of 1939, and Ms. North and I will soon be rushing to London.  Lovely Mary North who signed up via telegraph with the War Office 45 minutes after hostilities were declared.

Then I would meet Tom Shaw, mouth full of blackberries, commanding the little people of London to learn - but this commandment would be given to an empty room because the schoolchildren of the great city had all but abandoned it.  Then on to his flatmate, Alistair Heath, stuffing Julius Caesar full of newspaper.

Caesar, the poor bloke, was their dearly departed - and formerly randy - cat.  They had hoped to have him stuffed so that he would still be inside their hallowed halls.  With the outbreak of war, though, he had been returned, unfilled, from the taxidermist

While thinking about where those newspapers were going, could I smell the tobacco from Alistair's pipe?  Or the blackberries that Tom set to simmering in a pot to make jam?  Later, when Mary went out into London after the first bombs had been dropped, and she described the bejeweled streets covered in the broken glass from building after building - could I see the sparkling shards?  Feel them underfoot?

Yes to all that.

Yes because Mr. Cleave is a masterful storyteller who takes you by the hand and leads you on an adventure - a grim, funny, harrowing and thoughtful adventure.  Please - go buy it, because that's all you're getting from me.  You need to experience it yourself.

The trick, then, was to create a drink for the book.  If you've been here before you know that I like to find the cocktail inside the novel.  The ingredients are there, just waiting to be chosen.  But in his letter Mr. Cleave had pointed out one problem - drinks were hard to come by during the Blitz.

Still, if you knew people, or knew where to go (hello, Ritz), even this could be dealt with.  I also wanted to have the drink reflect some of those amazing characters that Mr. Cleave brought to life.  Mary - though she fought it - was decidedly upper-crust.  Tom, not so much.  This wasn't Pygmalion, though, not Eliza Doolittle vs. 'enry 'iggins, so gin just might be induced to play nicely with some champagne.

Do me a favor - don't knock it until you've tried it.  Because what I wanted to do was also give it a taste of something thrown together.  'Fancy a drink?'  What do you have?  'Let's see...'   The gin and champagne fit that bill nicely, but those two might need a wee something to round it out - which is when I remembered the blackberries. 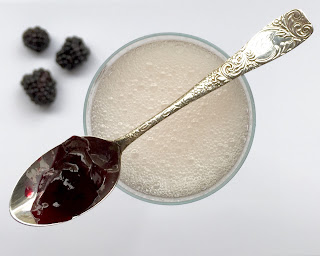 
Add gin and jam to an ice-filled shaker. Shake. Strain into a chilled champagne flute. Top with the bubbly. Garnish with a dollop of jam. Silver spoon optional.
Posted by Nicky P. at 10:35 PM