I've been trying to get Sue down, in words.

Sometimes, you spend more time with coworkers than with your family.  If you're lucky, you enjoy those coworkers.

With Sue, I was lucky.

With Sue?  It's the raspberries she brought from her garden to share with us at the store - red raspberries, wet and ripe.

With Sue?  It's the way she'd roll her eyes if I said something ridiculous - which was often.

With Sue?  It's the number of customers who would ask if Sue was working.  Why? I'd ask.  Well, they'd say, no offense to you, but Sue's recommendations have always been so great - is she here?

It's the image of Sue out back of the store, sitting there with a smoke in one hand and a book in the other.  I read a lot.  Sue?  Sue read more than anyone.  And when she'd see me, she'd call out, Hey Hon.

I miss all of her recommendations.  It wasn't just customers she turned onto good books - it was all of us.  Her first tip to me was to read Barbara Hambly's A Free Man of Color.  Hambly's hero is Benjamin January, a Creole doctor who returns to New Orleans after being trained as a surgeon in Paris.  He's fleeing ghosts, only to confront new specters rising from Louisiana's swamplands.

So I miss all of that, but with Sue, the sadness I feel is tinged everywhere with guilt.  I should have been paying more attention - but I wasn't.  I just wasn't paying attention.


July 16th was a Saturday.  Sue was the opening supervisor for the store that day.  She always got here early on those mornings so that, before she unlocked our front doors, the cash was counted for the register drawers and the previous day's deposit had been tallied, the old newspapers had been pulled and the new ones put out, leaving her time for a leisurely smoke and a read.  That Saturday, I stopped by the store just before we opened.

Sue was at the table in our back room, recounting the money.  That was unusual, but--

Nick, Sue said, I don't know what's wrong.  I keep counting the money, but it's just not making sense.

Had I been paying attention, it would have occurred to me that Sue never had problems counting the money, but--

Had I been paying attention, I would have noticed that Sue's speech was slightly slurred.  But I wasn't paying attention.  It's only after rewinding that brief encounter with Sue that I noticed something was off - that something wasn't right.  What was it? I kept asking myself later.  What's the false note?

Her speech - I should have noticed the false note there.

But I didn't.  I was busy.  In a rush.  I didn't have time to put those two things together - the counting not making sense, her diction.  I didn't have time to put them together, to make Sue call Ernie and get to a hospital.  Right then.  Instead, it was Josette who would send Sue home that Saturday morning.  Instead, it was Tracy who would send Sue home the next day, Sunday, even before they opened the store.  I didn't do the simplest thing - pay attention.  I didn't call Ernie.

Do I have any idea what was so distracting to me that day?  None.

Sue's last morning here at the store was Sunday, July 17th.  Her birthday was two days later, on the 19th.  Sue's memorial was held at her son's house, at Jordan's home in San Francisco, on Saturday, November 5th.  Just a little more than three months later.

I keep trying to get Sue down, in words, but it's difficult.  I'll start the writing, and then something will happen.  Jerry will bring in some gin and mix martinis after work.  On a Sunday night.  Late.  During the holiday rush.  And Duane, Ben, Jerry and I will drink the dry spirits that Jerry mixed, drink them from fabulous 50's martini glasses that Jerry brought in.  And we'll talk about the season, and how busy it's been because of Borders closing its doors, but pretty soon - we'll get around to Sue.  And we'll talk about Sue.  And we'll toast Sue.  And I'll break one of those fabulous glasses of Jerry's, and apologize, and Jerry will laugh it off.  No problem, he'll say.  Thank god it was empty, he'll say.

And then later I'll look at the words that I'd written and realize they aren't good enough, not nearly good enough, for Sue.


So I keep trying to get Sue down, in words, but it's difficult.  I'll start the writing, and then I'll receive a card from Karen, one of our customers.  And Karen will write:

I am so very sorry to hear of Sue's death.  You all seem so close, I'm sure this loss of a dear staff member is just terrible.

Sue was my "bibliotherapist."  When I was first diagnosed, she introduced me to Meredith Norton's Lopsided.  It was "just what the doctor ordered:" a dose of reality and a dose of humor....Sue pointed me to so many good books.  One of my favorites is Gumbo Tales....We also had some good discussions about The Warmth of Other Suns.

Oh, I will miss Sue so much.  I love reading the little tags you have on the shelves with her recommendations - like little memorials.

My sympathy to you all.


And then I'll look at the words that she'd written - Oh, I will miss Sue so much - and realize that my own words aren't good enough.  The irony, by the way?  Of Sue pointing Karen to just the perfect book as Karen began dealing with her own diagnosis, her own cancer?  Irony is sometimes brutal.


I often look at the Drink books I have on my shelves when I don't know what else to do.  It's distracting.  I get to lose myself for a moment, read about Drinks I'll never make, ingredients I've never heard of.  So I did that the other night, thinking about what I should drink when I toasted Sue one last time in 2011.  I grabbed a copy of The Bartender's Guide, one of three out-of-print books that Bob sent me - Bob, another incomparable bookseller.  Bob had sent me the books just because.  What Bob didn't know is that his thoughtful gift would in turn send me on one last journey with Sue.


I looked at many of my books that night before settling on a Sazerac.  It's the most New Orleans of all New Orleans drinks.  Perfect for Sue.  But before that, before that choice, before the chase had even started, I turned to the copyright page of that first book - The Bartender's Guide - because I'm a bookseller, it's what we do.

MCMXIV?  I'm a bookseller, right?  And we're a weird lot, so the copyright date of this random Cocktail book sent by a friend months before made me think of Philip Larkin's poem of the same name - MCMXIV - 1914 if the date wasn't printed in Roman numerals.  Larkin's poem is about the calm in England just before the Great War's madness descended.  If you don't have time for the whole poem, please read the last stanza - but here it is in its entirety.


Those long uneven lines
Standing as patiently
As if they were stretched outside
The Oval or Villa Park,
The crowns of hats, the sun
On moustached archaic faces
Grinning as if it were all
An August Bank Holiday lark;

And the shut shops, the bleached
Established names on the sunblinds,
The farthings and sovereigns,
And dark-clothed children at play
Called after kings and queens,
The tin advertisements
For cocoa and twist, and the pubs
Wide open all day--

And the countryside not caring:
The place names all hazed over
With flowering grasses, and fields
Shadowing Domesday lines
Under wheat's restless silence;
The differently-dressed servants
With tiny rooms in huge houses,
The dust behind limousines;


Larkin's last line reminds me of Sue.  Sue had been through and seen a lot.  I don't know a fraction of her story.  She got some of it down, in words.  And I'm glad for that.  Of all the stories she told me, the one I always think of first is Sue, on her 18th birthday - in 1966, the year I was born - leaving home.  Leaving behind the violence that had visited there.  And I see her, at 18, a young, beautiful, African-American woman sitting on a Chicago street corner with a boa constrictor worn around her neck like a scarf.  I see that 18-year-old with so much living ahead of her.  Heading off to England as a single mom, with two kids - because it sounded like a good idea.  Drinking at an English pub with the Doors, laughing at English groupies. 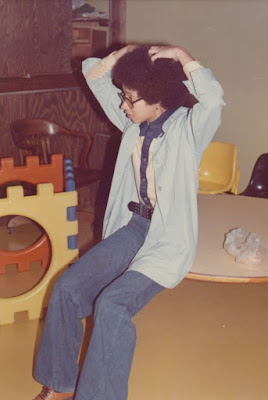 I imagine all the years in between, twenty-five of them as a bookseller, and the misfortune that befell Cody's Books that led to my good fortune, that led Sue to write me a letter on my birthday in 2009.  In that letter, Sue wrote


I am able to handle chaos and remain calm.

I am a book person.  I enjoy reading, talking about, recommending and selling books.


Such simple phrases that say so much.  That would portend so much that would come to pass in the two years I was lucky enough to work with Sue.  Working those two years, seeing her build relationships with customers and with us, with all of us.  Rejoining Elizabeth, also from Cody's, and Jerry, too.  Watching her friendship with Samm begin - Samm who would do so much for Sue in those three remaining months.

At Sue's Memorial, on that first Saturday in November, her husband took me aside.  Ernie said that Sue had wanted me to know that her last book was Zone One by Colson Whitehead.

That didn't make sense.  Maybe it was the wine - earlier, Ernie had directed me to the bottle without a label, to the wine he had bottled himself.  It's going fast, he had said.  Enjoy it while you can.

So I asked Ernie what he meant about Colson Whitehead.

Ernie explained that there came a time when Sue knew she had one last book to choose.  Sue, dear Sue, who spent so much of her precious time reading books.  Sue - always, always with a book in her hand.  And then there was only time for one more, and she knew it.

Sue had hosted Mr. Whitehead at Cody's bookstore - had met him and liked him.  Met him, liked him, admired his books.  And Mr. Whitehead had a new book out, so she chose it.  For her last book.

Of all the books in the world, Mr. Whitehead, Sue chose yours.

Did she finish it? I asked.

No, Ernie said.  She wasn't able to finish it.  But she enjoyed it while she could.

I keep coming back to that.  To the equanimity with which Sue was able to cope with her disease, with her prognosis.  The composure it must have taken to pick her last book.

I worry I don't have that kind of strength, that kind of control.  The power she had - even at the very end - to hold on.  To not let go.  To not close here eyes and let go even when the pain must have been overwhelming.

And why?  Why at the very end was she not allowing herself to let go?  Because she was waiting for the last of her children to arrive at her bedside.  The grown child who had gotten that dread call three months in the making, that they had to return home, to Sue, because--

And so Sue wouldn't let herself go until her last child returned.  Then, when that finally happened?  When everyone had gathered around her?  Sue relaxed and closed her eyes for the last time and let go.