I've written about my fondness for Mr. Boston before, and explained why this particular cocktail book is such a favorite.  Mainly, it's like a beer stein being offered by a St. Pauli girl of yore - overflowing with goodness. 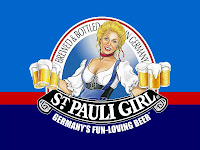 Not until the Volstead Act - that idiocy, that scourge - had a stake driven through its heart by the 21st Amendment, not until then would we be graced with the first version of Mr. Boston.  So it's this year, 75 years from the grey days of Prohibition and Depression, that we see the publication of the Diamond Anniversary Edition of his Official Bartender's Guide.

With 200 brand new recipes - and 1500 total, this iteration is fatter than you're used to.  And that's why Mr. Boston should be in everyone's home - at least in the homes of you stumbling sots out there.  It covers everything.  You don't go to Mr. Boston for depth, but for breadth?  He's your man.  So get thee to a bookery and then put the Mr. in someone's stocking - or just keep it for yourself.

I was going to keep it for myself until I handed it to my brother over Thanksgiving - but not before I used it to find a suitable drink for the Fall.  I wanted a recipe that didn't require me to buy some esoteric ingredient that I'd use just the once.  My bar is well-stocked, but it's not by any means encyclopedic.  I've been trying to keep it under control by, say, finishing one bottle of gin before buying another.  The bourbon's out of control, though.

Come, please, come over and help me bring the bourbon and rye back down to manageable quantities.

So, after positively deciding that I'd only pick a drink for the Fall that I could make with fixins from my pantry, I of course selected a concoction called Autumn Leaves.  Did it require the purchase of some stupid ingredient that I might use only once?  Sure it did.  But what's the point of making a decision if you can't break it?  Besides, wait'll you take a sip.

Stir with ice and strain into ice-filled old-fashioned glass.  Garnish with an orange twist.

I used Laird's Applejack.  We've used Applejack before, you and I, when we mixed Laura's November Manhattan.  A year ago?  How did a year pass?  Laura's married now, taking care of a baby.  It's been a year since we shared Applejack in that wonderful Manhattan?  Too long.  It's been too long.

The second time I unfurled Autumn Leaves - it was near midnight, and the drink banished some of the dark and cold as it accompanied this writing - I used a touch more Vermouth and a bit less Strega.  Just a touch more, a touch less - but it's the touch that counts, yes?  Also, I did the shaken-not-stirred thing.  It's the Bond in me.

The Strega Prize is Italy's most prestigious literary award.  Guido Alberti, owner of Strega Liqueur, was part of a social group in Italy in the '40's that met on Sundays to eat, drink, and attend a literary salon hosted by Maria and Goffredo Bellonci.  They had hoped that by bringing the literati together, they could help to heal the wounds wrought by WWII.  These Sunday Friends then launched, with Alberti's backing, the Strega Prize.  The Sunday Friends - now a jury of 400 - still nominate and select the winner.

I think I'd like to drink with the Friends.

Anyway.  Strega the booze, as opposed to Strega the prize?  It's beautifully yellow, and its color, when combined with the rich brown hues of the Rye and the Applejack, with the rose-red of the Sweet Vermouth, its color and these colors give the drink a soft, autumn blush.  Strega's medley of herbs adds a wonderfully complex hint of flavor to the drink - I taste mint, for sure, but I'm terrible at breaking down taste notes.  I know if I like it, know if I don't.

So again - come.  Come and we'll pour some of my abundant Rye, mix it with the Strega, and watch the leaves turn.  Salute!
Posted by Nicky P. at 12:05 AM