So Karen takes the girls on that Saturday morning to Kofman Auditorium.  The kids will be going through a dress rehearsal for The Nutcracker Rocks! that they'll perform the next day.

I'm left home alone, which is never a good thing.  I go into our back yard to again look at the scene of the crime.

The scene of the crime?  We have a small yard, but in it we have a big tree - a redwood standing majestically in the far corner.  I'd love to string it in lights for Christmas, but it's just too tall.  I'd gone in the back a few days earlier to try and figure out a way to light it - or maybe a way to set a star on top.  That's when I saw all the branches dumped between the tree's trunk and the fence.  I had no idea that the winds we'd had on

December first had caused so many boughs to break.  And then deposited them neatly between the tree and the fence. 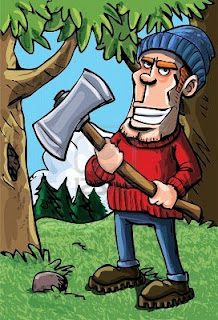 When I looked closer, I saw that the ends of the branches had been sawn through.  No wind shear here, just a grumpy neighbor playing lumberjack on our tree - and then throwing his debris back into our yard.

Listen, if you have a problem with branches hanging over your yard, you have every right to trim them to your heart's content.  My preference would be that you knock on my door and explain the situation - I'll call the woman that worked over our maples this year and have the work done properly.  In order to, you know, prevent the tree from being hacked at by a drunk Lizzie Borden.

But again - you can do what you want.  But don't then throw the branches into our yard.  That's a Jerk Move.  What do you expect is going to happen when the homeowner sees what you've done?  Maybe you don't know that this homeowner is Greek.  Maybe you don't know that this holiday season has been stressful.  That the store has been even busier than I could have hoped, but that this has only added to the strain of December.  Maybe you don't know that, left to my own devices, I'm going to grab the biggest of the dying limbs, its end as thick as my arm, its length twice my own, and drag that son-of-a-bitch out of my yard, down Monte Vista Avenue, up High Street, and then along Fairview until I get to your stupid house.

Where I'll throw the evidence of your destruction onto your front lawn, you jerk.

Where I grew up?  This is an example of going Greek.  Do you have the image?  Some idiot in his shirtsleeves on a brisk, December morning?  Pulling a huge branch behind him as his breath clouds the cold air in front?  Lugging that branch around two corners as needles break and trail after?  Trying to heave the branch onto the grass of a seemingly slumbering house?

So I tell him.

I get that, says Good Neighbor Dave.  You're upset.  I'm feeling - and here, his hand kinda makes a brushing circle in the air, like the Karate Kid doing Wax On.  I'm feeling, he says, some tension.  Wax on go his hands.  Some anger.  I get that, he says, I do.  But I feel like I should tell you something.  That guy? and he gestures over at the house, the house that has an abandoned branch in its front yard.  That guy is crazy.

Oh, well, says Good Neighbor Dave.  For example, when my oldest was about eighteen months old, we made a circuit around the block.  When we got close to our house, she pretended she was walking on a balance beam.  Took a half step off the sidewalk, started walking on the grass.  Arms out from her sides, waving a bit like she was working hard to keep a straight line.  But she was walking on his lawn - Good Neighbor Dave gestures again to the house with the branch in front - and that guy comes barrelling out of his house, yelling at her.  Vulgar words.  Yelling to get off his grass.

For example? Good Neighbor Dave says again.  One day, I drive home after shopping for groceries.  There's a car parked in front of my house, so I stop in front of his.  Just to unload my groceries.  I've dropped the first load inside, and as I'm leaving my house for a second load, I see him - again with the gesture - through my front window, and he's spitting on my car.

Because you parked there to unload groceries?

Yes, says Good Neighbor Dave.  So I wanted to tell you, he says, because, well, you've got the little girls....

Mentioning my girls of course changes everything.  I think about them for a second.

And you think, I say, that this is something that could escalate?

I do, says Good Neighbor Dave.  I do. 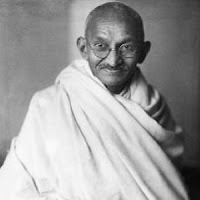 Then Good Neighbor Dave pulls the Gandhi card and says, I just think you need to find the answer inside you.  Gandhi found it there, you know?  He found peace there, even in the face of pretty extreme adversity.

We bid each other good morning.  I take a deep breath.  Look at the stupid branch over there in your stupid yard.  And march over to pick the son-of-a-bitch up and drag it back home.

As I'm bent over getting a grip on my branch, I hear the unmistakable sound of your front door being unlocked - click - and then that door being opened.

What Good Neighbor Dave failed to mention is that you are about six and a half feet tall and broad shouldered.  Really broad shouldered.  He also left out the part that you appear to be ex-military.  But not our military.  Like Stasi. Or Red Army.  Maybe Gestapo, but you're too young for that.  Though you're not too young to have a small and tight Chucky-grin stapled to your face.

It'll stay there through our brief conversation.

What's going on? you ask.

So I tell you.  I start with the tree and its sawn off branches.  I describe going Greek, though I may not use that term.  I explain - without mentioning Good Neighbor Dave - that I then had a moment of conscience.  That I decided that my action was as passive-aggressive as your own.  That throwing one branch into your yard was as silly as throwing all the branches over my fence.

And you just grin your Chucky-grin.

You tell me you didn't realize branches had made their way into my yard.  You allege you filled your green bin and your neighbor's green bin with the all the branches you had cleaved from my redwood.

You're lying, of course.  I had counted the jagged cuts despoiling our tree - nine - and I had counted the branches that had been tossed in my yard like corpses in a paupers grave - nine again.  So you lie, but I let it go.  Like Hamlet, conscience makes a coward of me.

We part with a handshake - me telling you that that my choice would be for you to knock on my door if you have an issue forcing you to action.  You lying through your stiff, Chucky-grin.  Me lugging my branch back to Monte Vista to cut into pieces small enough to fit in our own green bin. 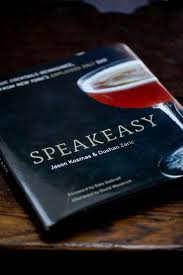 It was too early for a drink, even though I wanted one badly.  Instead, I consulted Speakeasy, a cocktail book from last year.  Jason Kosmas and Dushan Zaric gave us a fine collection that came out of their New York bar, Employees Only.  I don't like the book only because Kosmas is Greek.  I mean, that makes it better, sure, but it's also full of great stories and quenching drinks.  I settled on something easy, something satisfying.  Something I could mix later that night, something that would chase the cold.  The perfect choice from a host of perfect choices?  The Whiskey Sour.

Pour the whiskey, juices, and syrup into a mixing glass.  Add large ice cubes and shake vigorously.  Strain into a chilled rocks or Old Fashioned glass over large ice cubes.  Garnish with the orange and cherry.
Posted by Nicky P. at 8:44 PM