One Jigger I Pour No Less No More 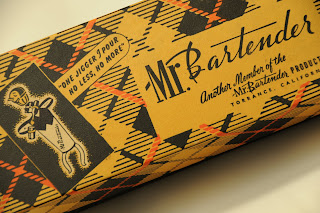 I don't own a jigger.

I know, I know.  This makes no sense.  Here I am, writing about all things wonderful when it comes to drinks, how can I not possess a jigger?

I eyeball it, is what I say.  I go by feel.  And a shot glass should work, right?  Especially if it was given to me by my favorite bartender ever, the Russian Paulina?

Excuses.  Excuses all.  And the more I delved into vintage cocktail books - I mean, this whole endeavor began with Jerry Thomas' Bartender's Guide.  Remember that?  We were going to drink our way through the book.  Yes, yes - we have gotten a little far afield.  I know that, too.  But you'll forgive me.

Anyway - some of these old Drink Books are gorgeous.  My favorite was The Merrie Christmas Drink Book.  It came out 55 years ago, in 1955.  (Dig all those 5's?  Because I do.)  It's just a whimsical little book - with flowers and snowflakes and a gent blowing a horn whilst standing on a horse - all these are just some of the decorations adorning the cover.  And when you open that cover and look inside?  The recipes begin on page 9, and the first concoction is an Absinthe Cocktail:

Come on - what's not to love about that 3-2-1 countdown?  Or spelling it "sirup"?  But the best thing, for me, was the lyric at the top of page 9, all beautiful in red calligraphy:

Did I know St. Nick would make an appearance at the start?  Of course not.  But this Nick loves that.

Anyway.  Jerry Thomas.  Have I mentioned Jerry?  How his book began all this?  And here I am, without a jigger?  And here also many of these delicious books that are sprouting on my shelves all lead with the admonitions - use the best ingredients (some of the writers were slow-food enthusiasts decades before that arrogant concept was coined) and have the best tools at the ready.

What's the most basic best tool?  Alas, the dreaded jigger, of which I was bereft.

Here's where it goes back to my dad.  You knew I'd be going there sooner or later, yes?  Yes.  Indulge me.

I'm sitting with my mom, in her dining room, a few weeks after my dad died.  It was quiet and dark and we'd talk, and then not.  When not, the only sound was the antique clock that hadn't ticked until I wound it the week before.

I look over at my dad's bar, at all the glasses on display above, to the liquor below, and I'm intrigued suddenly by the cabinets underneath.  We'd ransacked it earlier, taken out the good Metaxa so we had it on hand when callers called.  If you're Greek, there are three things you have to have on hand to offer callers when condolences are being given:  coffee, paximathia (unsweetened Greek biscotti), and Metaxa.

I drank a lot of Metaxa in between my dad's death on Monday and his burial on Friday, seemingly without consequence.  God, I was bulletproof for a while.  Until the Thursday night.  But we'll leave Thursday for another time.

That was the first time I can remember going through those cabinets under the bar.  And now, in the quiet of the house, I recalled the treasures that lay hidden, treasures that I hadn't paid attention to at the time because there was so much else to do, so many people expressing sympathy.  But that day, with just my mom at the house, with just the ticking keeping us company, I thought 'jigger.'  Of course my dad must have owned one.  So I asked.

And my mom just shrugged which I took as permission.

Jiggers.  Sure, you can buy them anywhere.  Probably for a few bucks.  But I wanted my Dad's.  This has led to some contention with my brothers.  I am the middle of three.  And even before my dad died, we had started staking claims.  George was holding my dad's baseball glove hostage.  We all loved that glove.  In my letter, I let my dad know that playing catch with him was my favorite memory as a boy, the ball thwocking into his 1940's mitt.   After the funeral, George and I would learn that Dean had been given my father's wedding ring.  You know, for safe-keeping.  And now, here I was, coveting his jigger.

He had one.  It was in the first drawer I opened.  Just one of those stainless steel jobs exactly like the one you're thinking of when you think jigger - when viewed from the side, it's an X, the top portion holding 1 ounce, the bottom holding 1½.

Because I wanted to drown out the ticktock, and because I was holding the cool jigger in my hand, I asked my Mom, "Do you know when Dad got this?"  I knew my Mom would know.  She knows everything.  I was scared of the answer I might receive - "Oh, he picked that up at Target a few years ago," - but I had to say something to silence the ticking, and when the answer came, it was better than I could have expected.

"All his bar things, your Dad owned all of that before we got married.  He brought all that from the apartment."  The apartment being the rooms he shared with his aunt, my Thea.

I held a cardboard box with a yellow, plaid design.  It proclaimed "Mr. Bartender.  Another Member of the Mr. Bartender PRODUCTS, TORRANCE, CALIFORNIA."  And also, "ONE JIGGER I POUR NO LESS NO MORE."  Inside are five bottle pourers, stainless steel like the jigger, but attached to corks.  You stopper a bottle of booze with them, and when you tilt it, they're supposed to let out an ounce of liquid.  They were ok, but that box?  I mean, go ahead, just look at that box.  How brilliant is that?

While I'm marveling, my mom is still digging.  First, a plastic martini shaker, the one I'll use to mix Harry DeCourcy's marvelous margaritas.  A larger pourer.  And then.

Did I mention that I started this endeavor because of a vintage drinks book?  That I've been collecting other cocktail books, new and old?  From the obscure, like The How and When, by Marco.  My copy is the first, published in 1937.  A beautiful black book with a gold spine.  Its preface begins, "The purpose of this book is not to awe the reader with the stiff traditions ordinarily associated with the formal use of fine wines and rare liqueurs."  And while you may not have heard of Abe Marco, or his book, or the bourbon whiskey he sold on Wabash Avenue in Chicago, you probably recognize the Mr. Boston Official Bartender's Guide.  It's been reprinted almost annually since the first edition of 1935, with some exceptions.  The war years saw no new printings, while some years ushered in two separate editions.  The most current copy I have is from 2009.  It's one of those things you toss out every year when the new edition appears.

And then my mom hands me the Old Mr. Boston De Luxe Official Bartender's Guide.  By the subtle difference in titles it's easy to see that this copy is much older than mine, and it's also easy to explain why it's so much cooler.  The cover is the familiar red, but brighter than mine.  Such a brighter red.  The lettering on the cover is gold, not silver.  Especially wonderful is the $1.00 stamped into the upper right corner.

The endpapers?  The endpapers are sublime.  The 2009 edition has plain, black endpapers, where this earlier one sports works of art.  The papers before the title page are illustrated with shelves in a well-stocked bar, picturing liquor bottles and glasses and books and steins.  In a bit of design-flourish that would impress Chip Kidd, this full color illustration is reproduced again at the back of the book, which is common, but there the illustration is all in red, echoing the cover, but each glass is highlighted in white, with the name of the glass now added underneath.  And where one merely gaped at the first illustration, here at the end of the book one receives an education in the difference between the types of glass one should serve a Delmonico in versus a Sherry, or a Hot Toddy compared to a Flip.

Many cocktail books were produced by liquor stores or liquor makers, and part of their charm is the ads you'll find inside, like the ad for Marco's own bourbon.  My copy of Mr. Boston eschews such ads, whereas my dad's is studded with full-color advertisements for Old Mr. Boston Vodka, Old Mr. Boston Golden Gin or his Mint and Orange Flavored Gins.

Can you tell I'm loving this book?

I want to look at the copyright date.  I do.  But I'm also scared again.  I don't want to pop this champagne bubble.  I'm constructing stories with this book - essays, novels.  And I don't want reality to intrude.  But I do, of course I do, because I have to know.

So I look.  I'm a bookseller.  It comes natural.

This edition of the Old Mr. Boston De Luxe Official Bartender's Guide came out in 1961.  1961 was one of those odd years that saw the publication of two editions of the Guide.  The first was printed in January.  This copy, my Dad's copy, came out in June.

My Mom arrived in the United States from Greece on May 8, 1961.  She met my dad in Stockton - one of the Pappas' got baptized that September.  If my dad was anything like me, he purchased his new copy of Old Mr. Boston and threw out the old.  Until 1961.  When obviously he decided he didn't need to keep buying copies of this book.

And there's something beautiful here - this glimpse at a stratum of my dad that I didn't know existed.  And though we never spoke of Mr. Boston, here we both were, buying his book, fifty years apart.  I hold the bright red book in my hands, imagining my dad holding it in his.  Did he ever make the Adonis on page 1?

Or the Olympic Cocktail on page 69?

If he did, I know my dad substituted Seven Star Metaxa for the Five Star Brandy.

My dad's copy of Old Mr. Boston now stands on my shelf, with the rest of my collection, between The Merrie Christmas Drink Book and Marco's The How and When.  It fits there, it has a home again.

I told my bothers about the jigger.  They know I have that.  But I didn't tell them about Mr. Boston.  It's my turn to hold a hostage.
Posted by Nicky P. at 1:14 AM