So, there are two gents who have biographies out this holiday season.  Both are 'Big' books.  Both have black and white pictures of the authors on the cover.  One's by a dead guy - the other's by a guy who should be dead but ain't.

How are these two books doing sales-wise?  I'm glad you asked.  The book by Mr. Richards - titled Life.  Look, I know it's only rock 'n roll, but time was on his side and wild horses weren't going to prevent Keith from getting satisfaction.

I can't believe I just wrote that sentence.  But hell, it's late - may as well play with fire, eh?

Ok, ENOUGH already.  Sorry.  The point - my point?  We all knew it'd sell.  When I saw how many we had ordered for the store, I said get some more and some more after that.  I'm not very good at picking winners.  If I was, I'd be spending my time at Golden Gate Fields, not Books Inc.  But Keith?  It wasn't exactly a stretch to bet on him.

The other book was a little ditty dictated by a guy name of Clemens.  Samuel Langhorne, better known as Twain.  This was the one you wanted to succeed, but weren't about to bet the farm on.

So, what happened?  They're both selling.  God bless us, everyone.  But the interesting thing - Twain is outselling Richards.  In the store I manage, he's ahead by two lengths.  And if you check out the New York Times Bestseller list, you'll see that for this week, while both books are in the top ten, the author has overtaken the rocker - and the Huckleberry Star is actually ascending.

This outcome couldn't have tickled me more.  It's the kind of thing that gives me hope for the Republic.  But now that it's happened, I do find myself torn.  I mean, I love Keith.

C'mon, anyone who refers to Mr. Jagger as Her Majesty, Elton John as that old bitch, and who denounces Prince as an overrated midget - I'm going to pull for that person, you know?  So there I was, wondering how to give Keith a little nudge.  He's not going to overtake the father of American literature - unless UC Press is unable to get me more copies of the Autobiography of Mark Twain.  I'm out of stock.  Everyone is.  But the Press keeps promising more. 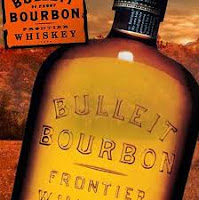 Still - how best to give Keith a little more in-store exposure?  The easiest thing, of course, is to highlight Life on it's own shelf there in the shop on Park Street.  We like to make the displays interesting by adding items that aren't necessarily for sale - but that add appeal.  So next to the stack of Keith's book, I added a good bottle of bourbon, a cocktail shaker, and an empty packet of smokes.  Duane was able to give me the empty
after he killed his latest pack.

So - books, bourbon, a shaker and smokes.  It had the desired effect.  People took notice.  Some wanted to buy the Bulleit, but more bought the book.  I've been adding alcohol to book displays for ten years.  Valentines Day?  It's also the anniversary of the publication of The Maltese Falcon.  Throw some whiskey on the table, an overturned shot glass, and you have the perfect accompaniment to that hard-boiled masterpiece.

I've never had a problem before.  Customers respect the idea.  They get it.  No one has ever tried to deface the Mona Lisa, not here in Alameda - or in San Francisco, when I tarted up the displays there.

No one until last week, when someone walked into the bookstore barehanded and left clutching that bottle of Bulleit.

Who steals another man's bourbon?  What kind of low down, scurrilous, pathetic cretin does that?

Yeah, yeah - alcohol has no place in the bookstore, you say.  I was asking for trouble, that's what you're thinking.  And to you I say, bah humbug.  It's a way to make the store more interesting, and anyone--

Not that I'm bitter or anything.

What's a guy to do?  Get right back on that horse, right?  We were talking about the ponies earlier, weren't we?  So I'm gonna cowboy up, tuck another bottle into this here saddlebag on this here palomino, and make me another little ol display for Keith.

Course, this time, the bottle may not hold liquor, because this bottle?  This bottle of Royal Lochnagar Single Malt?  The Royal is a wee, bonnie Scotch Whiskey, given to me by a lass name of Grainne, given before Grainne sailed back over the pond.  Grainne bequeathed all her scotch and whiskey to me before she moved - a gesture as lovely as the lass herself.  I've been nursing the Royal like a bairn, and tonight I only have a dram left.  I'm sipping it now, this fine 12-year-old from the Eastern Highlands.  Queen Victoria bought a little place near the distillery - a castle named Balmoral.  She's rumored to have liked her Royal quite a bit, right Grainne?

I can understand why - a lovely touch of smoke going down easy on this December night.  Grainne, may ye ne'er want a frien', or a dram to gi'e him!

So I'll take that bottle of Royal, empty now, and fill it mostly with water.  Then a wee bit o' white wine vinegar, nice and clear.  Four drops of yellow food coloring, one drop of the red.  Mixed up, it'll take on the warm cast of the Royal itself.  Not perfect, mind ye, but close enough to the eye of a thief.

I worry the vinegar will give it a certain bite that the unsuspecting will regret.