Is it awesome? (And please, I've spoken before of the use of the word Awesome. I intend its use as the Lord our God intended it to be used - a feeling of reverence produced by the sublime. Your '63 Chevy is not awesome. Nor is Lady Gaga.) 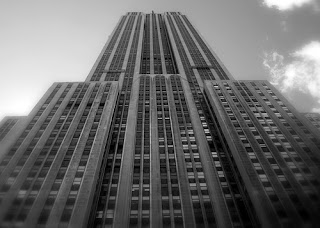 So - is the Empire State Building awesome? Sure. The world's tallest building for forty years - not a record that'll be broken. Tallest until the North Tower of the World Trade Center was finished in 1972. Tallest again in New York after September 11th, 2001.

Just don't try to get to the observation decks.

Karen and I had a few hours to kill on our Saturday in New York, so we decided to be tourists and do the most touristy thing we could think of.

Top of the Empire State.

What the authorities don't tell you, on a beautiful Saturday in New York, is that it's going to take about four hours total to enjoy the view. 240 minutes. 220 of those minutes will be spent in line. After line. After line.

At least Disneyland has the courtesy to have those stupid little signs acknowledging that you have to wait.


I'm here to tell you, if we had seen a sign that said:

...we would not. Have waited. Of course, that's probably why the Powers That Be don't inform you of the stupid wait. In New York, there's always something else to do, so you'd do that. Something else. And not waste more than three hours for a glimpse of the stupid view.

Ok, the view's not stupid. Still. Three and a half hours? Are you kidding?

The only funny bit was the dad ahead of us in line. The way they work it, you think you're getting to the end of the line, when you turn a corner - more line! Or you get to a door, open it - more line! Elevator, in, out - more line! So this poor guy is in line with his two girls, and he's gotta use the bathroom. He figures, I've been in this fucking line for three hours, we ain't moving, I'm just gonna go pee. What could happen?

What could happen is this. Some freak in an ape suit could choose the exact moment that the bathroom door closes behind the dad to leap out and terrorize the crowd. He could beat his hairy King-Kong chest and roar like only a freak in an ape suit can roar. His rampage will cause the youngest of the two girls, the girls now alone, without their dad - he's in the crapper - Kong's frenzy will make the youngest of the girls scream in terror. Scream and cry, loud and long. She'll be screaming so loud and long that I, thinking about my own two little girls, will be tempted to cut through the line and offer succor to the wee thing.

Just before I make the move to try and stem her crying jag, the dad emerges, wiping his hands on his jean jacket.  He hears her cries and looks up. For a moment, he thinks - that's not my daughter. Can't be. But then panic sets in - he walks faster, starts to rush.  The crowd of us lets him know - yes, that is your daughter and where the hell have you been?

We're all imagining the conversation when the dad and the girls get back to the hotel, back to the mom that has taken the afternoon to luxuriate in the bath - maybe order room service. What do you mean, the mom'll say when the story comes out, you left the girls alone, in New York? Are you crazy? I knew I shouldn't have stayed behind, I knew it. 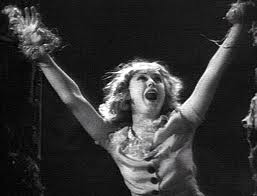 For the rest of us, at least, that drama broke up the wait. I mean, we knew the little Fay Wray wasn't in harm's way - just scared out of her gourd without her father to protect her, is all.

Anyway.  There's my memory of the Empire State Building.  And yes, the sight from the deck is breathtaking. Where else can you see five states at once? And our day was clear and bright. The Chrysler Building, from above? And the Flatiron? The Hudson River, the East? Brooklyn, New Jersey, Central Park? Amazing, yes, seen from so far above.

Karen's hair, blowing in the wind, the wind skirting across the top of the world.  That's my other memory.

But 220 minutes in line when you could be out in Central Park? Or Brooklyn?  C'mon.  You're with me, right?  You want a slice of John's Pizza more than you want to read about the Building's energy efficiency retrofit project while you inch through that line, right?  C'mon, right?