A Brief - Brief! - Diversion Into the Labyrinth

There’s a little bit of Chartres Cathedral near my house - at least there's a labyrinth in Boston College that takes its pattern from that 13th century masterpiece.  I step into the Memorial Labyrinth during some of my late night walks if I head in the direction of BC. When I first started walking it, our first winter here, I always rushed because I was cold. Gloved-hands-tucked-under-arms, breath-clouding-the-snow-filled-air cold.  I'd approach the Labyrinth, take that first step, and then hurry to get it done - left, hurry, quick pivot right, hurry, pivot left, hurry. 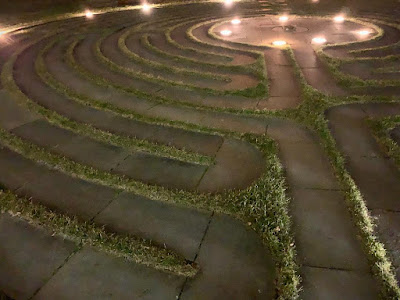 But pretty soon, the magic of the labyrinth cast its spell. It forced me to slow down. To consider my steps. And when I say magic, that’s what I mean. I’m sure the designer of the labyrinth at Chartres wouldn’t appreciate my use of the term. He would prefer that my walk through his labyrinth elicit prayerful meditation.  And, actually, it's hard for me, walking Boston College late at night, not to think of God, of religion, of two thousand years of history. I mean, I always pass Mary, just on the other side of the beautiful Burns Library. 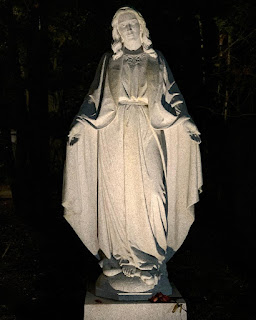 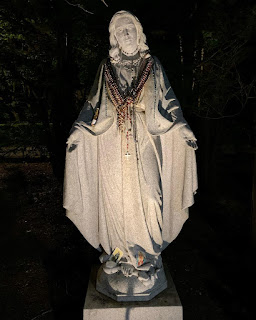 --but she's always there.  As are the gothic structures - those fabulous libraries - as are the borrowings from famous cathedrals, as are the crosses.  All beautiful, all reminders of BC's Jesuit founders.  But for me, sometimes, they all haze together into an indefinite backdrop to a quiet late-night walk interrupted by the occasional laugh of a group of students headed back to their rooms.

But when I slow down, inside the labyrinth, it's hard not to fall into a meditation - a reverie - as the maze asserts itself.  Sometimes my meditations are somber, sometimes they can be ecstatic, rapturous. And there? Right there? Using loaded terms like ecstasy and rapture? Maybe what I’m feeling is exactly what was intended, maybe the magic I feel, walking so close to the towering, gorgeous and gothic Burns Library, is more religious than not. Certainly I’ve had my share of personal revelations on these walks, and certainly the labyrinth has helped my thoughts to both lose and regain focus.

I wish I had a point. But I don’t. I’m just going to head on home. It’s cooling down. 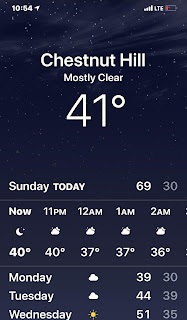 Not what we would call cold, not after a springlike few days here in Boston. So it’s not exactly toddy weather, but too cool for a proper cocktail, so I'll probably land somewhere in between and pour myself a whisky, neat. Nothing fancy, maybe a little Johnnie Walker.  Then I'll think some more on these times, on the books unwritten, on new friends being made, and the pile of unread novels that beckons.

I'll get back to mixing, soon.  Maybe tomorrow.  But for now, just a quiet Sunday night outside Boston, walking a labyrinth with seven centuries of memories inside, illuminated by the infrequent sweep of headlights, but mostly dark, mostly shadows.  Cheers.
Posted by Nicky P. at 11:57 PM