Bookselling in the Time of Cholera

He did not live to see his own glory.  When he recognized in himself the irreversible symptoms that he had seen and pitied in others, he did not even attempt a useless struggle but withdrew from the world so as not to infect anyone else.  Locked in a utility room at Misericordia Hospital, deaf to the calls of his colleagues and the pleas of his family, removed from the horror of the plague victims dying on the floor in the packed corridors, he wrote a letter of feverish love to his wife and children, a letter of gratitude for his existence in which he revealed how much and with how much fervor he had loved life.  It was a farewell of twenty heartrending pages in which the progress of the disease could be observed in the deteriorating script, and it was not necessary to know the writer to realize that he had signed his name with his last breath.  In accordance with his instructions, his ashen body was mingled with others in the communal cemetery and was not seen by anyone who loved him. 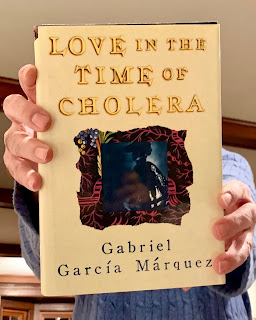 I didn't read those words until 1988, when Cholera was finally published in English.  His words stopped me in my tracks then.  Now?  With this - all this - surrounding us?  The words are even more searing and more poignant.

Have you figured out the new normal yet?  I haven't.  We've joked, here in the store, about how adaptable Indie bookstores can be.  How we've changed our business model about ten different times since the pandemic crossed the Atlantic.  And it's true - we have.  First we reduced our hours.  Then we offered free shipping until that proved unsustainable.  We had home delivery - first local delivery.  Then just to Brookline.  I've told the story a million times of walking up the graceful approach to a beautiful Brookline home.  A grand window looked out on the covered porch.  I could see Mom at the table, folding clothes.  A passel of kids were doing dangerous kid things with broomsticks.  Then they all saw me.  I lifted the bag bulging with books so that they could see the familiar Booksmith logo.  The kids all dropped their sticks and did a little dance while applauding.  Mom?  Mom cried, maybe a little bit, just at the image of a bag of books being delivered for her family.

The new normal changes hourly and I can’t keep track of it.

But books remained constant - remained normal. But now they’ve gained greater resonance for me, for us. That family?  The books I had for them represented more that day than books had ever represented before.

How do you fit respite and hope and adventure and escape in a plastic bag?  You do that by filling it with books.

Books are nonessential, though.

Food?  That goes without saying.  Essential.

Booze - well, at least here, in Massachusetts?  Essential.  So essential that restaurants and bars can offer takeout on beer and wine, effective yesterday.

Books, though.  Nonessential.  And of course they are.  Of course it doesn't make sense to continue to gather in the store, even in small groups, even when safety protocols are in place, in order to just provide books.

So tonight we'll be turning the phones off at 6 pm, for good.  Tomorrow we'll do what we can to pack up any last straggling orders for those nonessential books that people have been buying by the bucket.

Even though they are nonessential.

Am I conflicted?  Of course I'm conflicted.  I've been doing this for more than two decades now.  To be nakedly told that one's work is non-essential is - interesting.  And it is, ok?  My work is nonessential.  I already said it.  I get it.  People are dying.  Economies are imploding.  Dictators are running amok because they can. Because we let them.

But books - books.  Oh, sweet Jesus.  Books have always been as essential to me as food, water, or air.  It's not hyperbole.  The books my parents read to me when I was a baby, a toddler, a child - they nourished me like the love they gave me, gave my brothers.  When my best friend died when I was eight, and I couldn't understand the bastard motivations of a bastard son of a bitch who blew up the plane Greg was traveling on, how much solace do you think I took in the books that his father gave me?  I took it all, anything I could find.  Every last fucking bit because it was all I had.  Because the books were a link between the two of us.  We had read them together when he was alive, and I read them alone when he was dead - and for a little while, I could imagine Greg looking over my shoulder as I read the words.  Greg correcting me when I was wrong.  Greg's little finger pointing to slow feet quick feet trick feet sick feet and laughing and laughing. 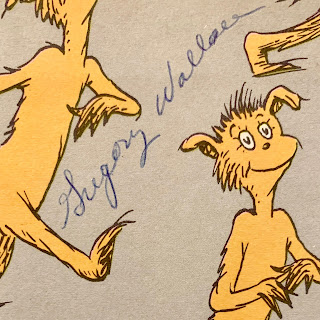 His laugh?  You would have considered yourself lucky to have heard Greg laugh.  Oh, to be able to hear that laugh just one more time.

Some of the finest people I've ever known have been the booksellers and publishers and authors who work so hard to make sure that the book you need is available when you most want it.  When you most need it.  Like now.  People are reading now because they need to.  Not because they want to but because they need to.  To hold the book in their hand and remember where they were when they first read it.  Who gave it to them.  What they felt at the beginning.  During the middle.  At the end, the glorious, painful, beautiful end.

Nonessential, though.  Now my books which have always been a constant - won’t be.

So we'll stop answering the phone.  We'll turn off the lights - except for our version of a ghost light, the one that stays on all the time.  It's over part of the fiction section on the right-hand wall.  But we'll turn everything else off, lock the doors, and go home.

Because of course it's necessary.