Drinking is a Topic of Conversation

Miranda Popkey has a novel, coming in January, that was written, perhaps, just for me.

Miranda Popkey wrote this thing and you're going to love it.

Miranda Popkey fashioned a novel that does something I like best - it makes me feel like I'm in a bar, it's dark, there's a lot of smoking going on, a lot of cigarettes being lit; it's a little bit loud, but I'm deep in conversation with someone, and because it's a little bit loud, I have to lean in close so I don't miss anything this person says. I don't know what strange alchemy led to this moment - and they tend to be few - when someone just talks. Open, uninhibited, frank. And their story sometimes meanders, there are fits and starts, sure, but when I think about it, each word is building on the one before it so actually? Actually? There's nothing haphazard about what I'm hearing. It's intentional, vitally so, but because I'm in a bar, and my drink is sweating on the table in front of me, and it's so cold and it's so good, and as I sip I'm reminded that there are few things that America has given the world that are better than a goddamn cocktail.

Few things better than the conversation that can ensue over drinks.

And in Miranda Popkey's novel, Topics of Conversation, that's exactly what you're going to find.  Conversations that leap forward in time. Sometimes one-sided, sometimes with a bit of an edge, but always they're going to be telling you about the people involved, the people speaking, the people listening. And they're so intimate, so revealing, that sometimes I had to stop, to remind myself that they didn't know I was eavesdropping - it's a book in my hand, not women at the next table having one of those fabulous conversations that you don't want to miss but you don't want to be too obvious in your listening.

That's another thing - most of the conversations here are by women to women, and so I did feel as if I was hearing unexpurgated thoughts that I, for one, am not often privy to.

Yes, then, this is a book right in my wheelhouse - intimate, sharp, smart.  Does it appeal to me particularly because some of the conversations take place in San Francisco, home for me for many years? And that it ends with a conversation in the San Joaquin Valley, where I was born and raised? Of course. But sometimes the best conversations, the best writing, take the specific and illuminate wider issues.

Have I said that this book was written just for me but that you're going to love it?  I think I did.

So - what to drink, what to drink.  The first conversation has a lot of wine being consumed.  A lot.  So I wanted to use wine. There's some coffee drinking, some mention of martinis, mimosas - and then we get to the bourbon.  George Dickel.

That stopped me because that's what I wanted - I'm in a bar, right? And I'm smoking. I mean, I don't smoke, but to quote from Topics of Conversation: "I wasn't a smoker, that is to say I only smoked other people's cigarettes." So I'm in a bar, smoking and this isn't a fancy place, the bar I've created in my mind, it's a good old-fashioned dive, and I'm ordering whiskey.  Dickel if they have it.  You've seen the t shirts, right?


If all you know is Jack
You don't know Dickel

Bourbon it was, then. But there was so much wine, there at the beginning, and I did want to use that - so I'm going to cheat a little bit, because what's vermouth? Fortified wine, thank you very much.  So I've got some Dickel, some vermouth, and since I don't want to just have a Manhattan, I'll add some of that coffee that Popkey mentioned.

As far as the name of our drink goes, there's a terrific conversational exchange that takes place between two women at an artist's exhibit entitled "Daddy Issues."

"I'm sorry, ma'am." This was the bartender. "At the artist's request, we have stocked a full bar but are only serving one drink:  George Dickel, on the rocks. That's a whiskey, ma'am. A particular favorite of the artist's father."
"I know Dickel's a whiskey. And don't call me ma'am." To my friend. "Too early?"
"Never."


I love how the patronizing tone of the bartender is called out immediately. Bartenders? Don't do this.

Anyway, there's our drink, and there's our name. And the coffee will fit in very nicely because, truly, it's never too early for coffee. 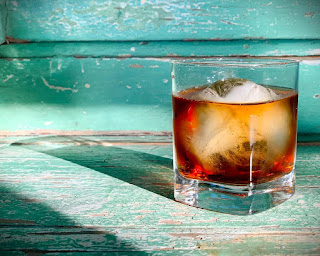 Stir all with ice.  I normally would have served this straight up, but the artist called for it to be on the rocks, and who am I to argue?
Posted by Nicky P. at 10:41 AM