I do these things, right?  I read and I drink.  I do other stuff, obviously, but for our purposes today it's the reading and the drinking; specifically, the creation of an individual cocktail for an individual novel.

You may have heard of San Francisco's reading program, One City One Book?  For me it's One Book One Drink. 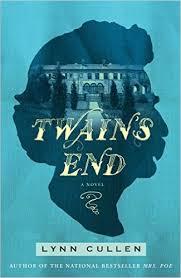 The cocktail for Lynn Cullen's Mrs. Poe was hatched during a dinner in San Francisco held for the author.  Imagine my delight when Lynn inquired if her new book, Twain's End, might also inspire its own drink.

Three guesses what my answer was.


First things first.  A month from now, when Twain's End is published?  Get yourself to an Indie bookseller and buy yourself a copy.  Lynn breathes life into the relationship between that greatest of American greats, Mark Twain, and his young secretary, Isabel Lyon.  No spoilers here - just know that Lynn has done it again and you deserve to read a good book so do that.  Buy Twain's End on October 13th.

If you exclude the words - which of course is ridiculous because this is the definitive example of the words making the man - but if you do put the words aside for just a moment, the thing people remember most about Twain is what he looked like.  The white suit.  The stern look.  Those eyebrows, that hair.  That simply wonderful hair.

I wanted to make a drink that was as recognizable as the author.  When someone said - You're drinking Twain's End - I wanted you to look at the cocktail in your hand and say - Of course I am.

So what I came up with was this. 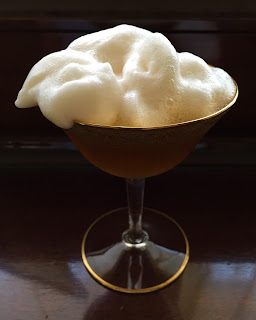 Bascially, it's a Whiskey Cocktail with a great head on its shoulders.  A Whiskey Cocktail because that's one of the oldest cocktails we know about (thank you Jerry Thomas).  It's a drink that our Mr. Twain would have consumed, often.  It's just whiskey, bitters, and a little sugar.  If you think it sounds like an Old Fashioned, that's because it is.

I'm using two types of bitters - Abbott's Original Bitters, sourced out of Canada by Darcy O'Neil.  Mr. O'Neil tried to recreate some of the oldest and most popular bitters there ever were - Abbott's have sadly been defunct for decades.  These were the bitters, though, that Mr. Twain would have enjoyed with his tipples, so kudos to Mr. O'Neil.  I also added Sarsaparilla Dry Bitters by Bad Dog Bar Craft because sarsparilla smells like the 19th Century (so says me).

But it's the foam that makes the Twain's End its own - and I added the sarspailla bitters to this, too, because, when you raise that glass up, the fragrance of the sarparilla is going to wash over you.  It's a lovely experience (if he says so himself).

Will you like it?  If you don't, you're un-American and probably don't like Mr. Twain anyway so off with you.  Find yourself another barstool.

One last thing - normally, you wouldn't shake a whiskey drink like this one, you'd stir it.  But because we don't have a nice cube of ice to set in the middle of the drink, to mellow the whiskey as it melts, we're going to shake it to release ice chips into the drink - and we'll mellow it that way. 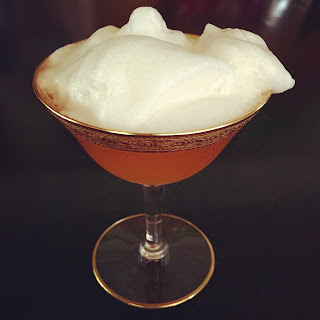 Shake all vigorously with ice.  Strain into a chilled cocktail glass.  Top with Twain's Foam.

Beat the egg white on low speed until the air bubbles decrease in size and turn white.  Add lemon juice.  Increase speed to medium and slowly add the sugar.  Continue whipping until everything is fluffy, glossy, and firm.  Add the bitters and whip just a bit more.