Europe is mad. The world is mad.

One of the things I enjoy about drinking is the ritual of it all.  How do you make your Manhattan?  How do you craft your perfect Old Fashioned?  When you concoct your Martini, is it always stirred, never shaken?  Forever an olive, or sometimes a twist?  We each create our own process for particular drinks - and following the process lends it familiarity.  Even if you mix it up sometimes, you'd recognize it anywhere.  Hello, old friend.  You look great tonight.

I can find solace there in the comforting ritual, and it's nights like these when solace is fleeting - so if there's something I can do to create it, to conjure it out of a cupboard, I will.

First I pick which absinthe for the drink.  Tonight we'll go French - Absente, Absinthe Refined - and I hold the cool, dark bottle in my hand, then pop the stopper and breathe in its heady, anise aroma.


Sir Ernest Shackleton had set off on his Antarctic Expedition before the war broke out.  But when it did, he knew the Expedition would have to be put on hold.  His duty was to his country, to his King.  But his King surprised him by urging him to carry on.  The King's command was given in the simplest way, with a simple word - just one - in a return telegram.  Proceed, his King said.  He and his men, he and his ship, would better serve his God and his Country by going forward, ever forward.  So.  Proceed. 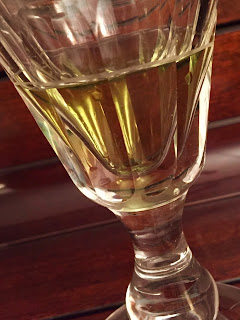 The Green Fairy gets poured into the beautiful absinthe glass that Josette presented to me.  My friend had just returned from two months in France, and before she had left I had asked her - oh so politely - if she could track down a pre-ban glass for me.  Absinthe was outlawed in France in 1915 during the height of the anti-absinthe hysteria that had convulsed Europe and then the world.

There was a lot convulsing the world then.

For anyone with a stemware addiction - me, for example - absinthe would naturally taste better in a glass that had slid across many a bistro table in the 19th or very early 20th Century.  So an ounce of the Green Fairy gets poured into the glass that Josette brought back for me, the glass she found in the same shop in Paris where, two years ago, she had procured an absinthe spoon - also for me.


Unfortunately for Shackleton and his crew, their ship, the Endurance, would get caught in the pack ice of the Antarctic.  Slowly, inevitably, the ice would crush their ship, leaving the explorers stranded in the most hostile place on earth.  With what supplies they had saved, they would camp on the ice, drifting on the floe until it, too, would crack and splinter under their feet, forcing them to enter their lifeboats for a journey that had never before been attempted.


The glass is beautiful, and when you place the spoon across the top you realize that though you've done this dozens of times before, it feels right for the first time.  A real absinthe spoon laying across a real absinthe glass creates the opening notes to this symphony you're going to conduct.  In your mind, you decide that this isn't the first meeting of this spoon and this glass.  They both hail from Paris, from the same antique shop - you're certain the one had lain atop the other more than a hundred years ago. 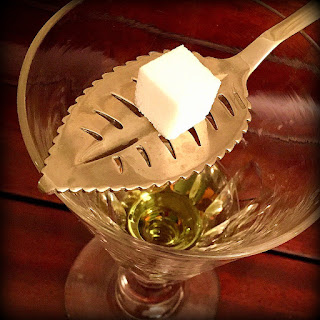 Before the First World War had started, before Ernest Shackleton would embark on his doomed voyage, this spoon and this glass had come together - clink - to begin a symphony that would end tonight.  Absinthe in glass, spoon across, sugar on the spoon - the cube placed there with the tongs Josette had brought back together with the spoon.  Oh, Josette, thank you, Josette, you beautiful enabler, you. 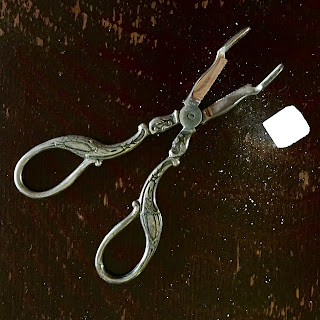 After five days at sea, Shackleton and his men reached Elephant Island, and though it was the first time in 500 days that any of them had stood on solid ground, Elephant Island was as inhospitable as the floes of ice that had carried them more than 300 miles from the spot where the sea had claimed the Endurance.  Shackleton decided that their only option for survival was to take one of the lifeboats on a journey for which it was ill-prepared.  700 miles away was South Georgia Island, and on the Island was a whaling station.  That station was their only hope.


There the glass stands, holding the absinthe, the spoon holding sugar, both ready to create music that can silence, for a moment at least, the voices that are strident tonight. 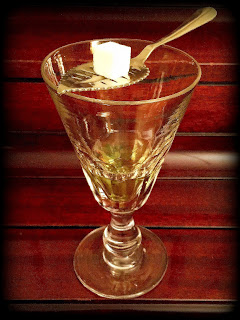 Voices rejoicing in the spilling of blood; other voices calling for more, blood for blood, since they cut us, we must cut them; still others blaming the madness on climate change, on poverty, on religion; on them, not us, on us, not them.

For what?  For idiocy.  Animal idiocy.


Doing everything they could to make the sturdiest of the lifeboats more seaworthy - adding height to its sides, sealing the new work with a mixture of paint and seal blood - Shackleton and five set sail with provisions enough only for a few weeks.  Shackleton knew that if they were adrift for any longer, the mission would have failed and they would be lost at sea.  So they set sail and for more than two weeks these six fought the stormy Southern Ocean until sighting South Georgia Island.  The whaling station.  Rescue.


The glass holds its ounce of absinthe, so now you pour cold cold water over the sugar, over the spoon, and the absinthe immediately begins to louche, turning milky, but tinted fairy green.  It happens in an instant, and the music in the glass swells as you add more water, an ounce, then two, as the sugar-cube begins to dissolve, three ounces of cold water, now four--

--and the music stops.  The symphony ends.  A century on, and it's done. 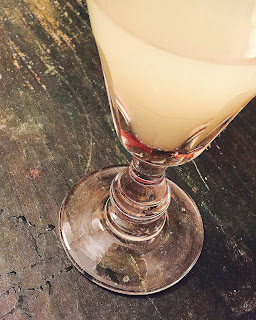 One last trek awaited Shackleton.  They had been forced ashore on the uninhabited side of South Georgia Island.  More than thirty miles of rough, mountainous ground separated him from the rescue he had sought for more than a year, so three left three behind and scrambled for a day and a half until arriving at the station.  Unwashed, matted of hair, wearing the clothes they had each worn for a year without change, the men must have presented a terrifying sight for those they first encountered.  The manager of the station looked warily at the three until Shackleton asked if he did not remember him from their previous meeting years before.  The manager thrust out his hand, "I remember your voice.  Come in, come in!"  The men of course had had no news of the world for more than a year, and scant news of the war for the six months before that, and because God and Country would be foremost in his mind, the next thing Shackleton said to the manager concerned the troubles that had just been starting when his voyage began.  "When was the war over?" he asked.  The manager was aghast.  "The war is not over," he said.  "Millions are being killed.  Europe is mad.  The world is mad."

At least for that time.