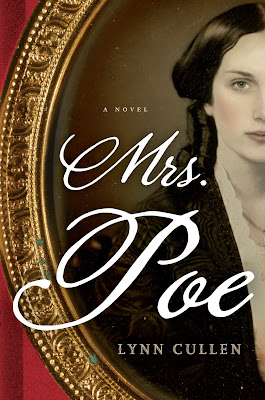 First there came the book, and the book was Mrs. Poe by Lynn Cullen.  I was seduced by the novel because it gleamed like a diamond in gaslight, its facets glittering.  Look, there's a love story.  Over here, a tale of 19th century Boston and New York with their cobbled streets and sinister corners.  And sparking over it all, Edgar Allan Poe.  So part masterful biography, too.

But always glinting, first here, then there - the two woman that would complete Poe's triangle.  Their love story wasn't innocent, of course.  Is seduction ever innocent?  And who - there at the beginning - was I supposed to like more?  Mrs. Poe, the frail and dying wife of the poet?  Or Frances Osgood, a writer herself, laboring to support her children after her husband left her for a brighter bauble?

So the book came first.  Then came the dinner.

Booksellers are sometimes treated to pre-publication parties in celebration of an author or authors.  This dinner took place in July and Ms. Cullen was one of the authors being feted.

The gatherings are almost always a delight and this was no exception.  The hope is that you meet the author - putting the proverbial face to a name - but also, just maybe, something more.  Something that sometimes happens when you're able to talk to an author over bread and wine - about the book and how it came to be or about some interesting morsel that dropped to the floor but that's still illuminating.

I'm lucky to sometimes be included in those gatherings.  On that San Francisco night, we talked books and booze and writing.

The drink came next.

I have a bit of a thing for Poe -  and for cocktails - and so there was some mingled talk that night about both.  I was delighted, then, when I was asked by Ms. Cullen to create a drink for the book.  Mrs. Poe had been chosen by Book Movement to be their Book of the Month for October.  Book Movement is a great resource for book clubs and they requested food and drink suggestions to accompany the discussions the book would generate.

If the drink had been called Edgar, absinthe may have played a role, but for Mrs. Poe it seemed something lighter was in order.  Although, even when good cocktails taste that way, they're never really light.

Mrs. Poe would begin with St. Germain, a wonderful liqueur that's light and aromatic, made from frail elderflowers.  Perfect for her. 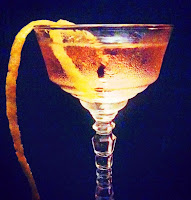 Maybe that and a little gin - I said cocktails are never light, right?  Some Benedictine, too, because that's something that Poe - Mr. and Mrs. - could have sipped in their New York, and I wanted to include something contemporaneous.

After some mixing and matching, Mrs. Poe became:

Stir all with ice. Strain into chilled cocktail glass. Garnish with lemon twist.


Then we decided (this had become a collaboration and Lynn is as much the author of these drinks as she is of Mrs. Poe) some punches would be fun, too - since punches were all the rage in New York society in the 1840's.  Like, for example:

Lightly muddle mint leaves with apple juice and sugar.  Add lemon juice and stir until sugar dissolves.  Chill until it's time to talk about Mrs. Poe.  Pour into punch bowl.  Add champagne to taste.  Garnish with frozen raspberries and mint. 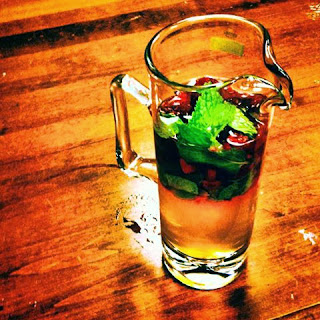 As you can imagine, this was a joy for me.  Here I was, mixing two of my passions.  Terrific, yes?

And that would have been enough, but then the wonderful people at Gallery Books (hello Stephanie DeLuca and Simon and Schuster) created a terrific broadside with the recipes for the punches and the cocktail.

I've been called a number of things in my time, but never a mixologist, and yet there it was - in print - so it had to be true, right?

For me, a favor?  Please purchase Mrs. Poe - I'd prefer that you bought it from your favorite indie bookseller, but what I really want is for you to own it, to read it.  So get it.  And if you have time, stop by ye olde bookshoppe tonight because Lynn Cullen will be there and we'll be talking Mrs. Poe and sipping more of those drinks. 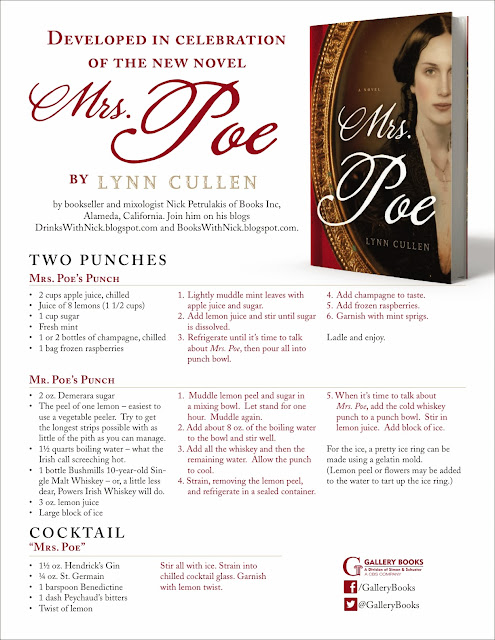