I warned you about the Curse of the Goat - about Billy Sianis hexing the 1945 Chicago Cubs, a hex so strong that the Cubbies haven't been back to the World Series since.  And there I was, heading into the belly of the beast - going to meet my goddaughter at Murphy's Bleachers, a bar in the shadow of Wrigley Field, going there to watch the San Francisco Giants try and close out their National League Division Series against the Washington Nationals.

Would the bad luck of the Cubs rub off on the Giants since Sara and I were in Chicago?  A superstitious person would say yes.

Still, we did everything we could.  Earlier, I had gone and paid obeisance to Mr. Sianis by visiting his Billy Goat Tavern. 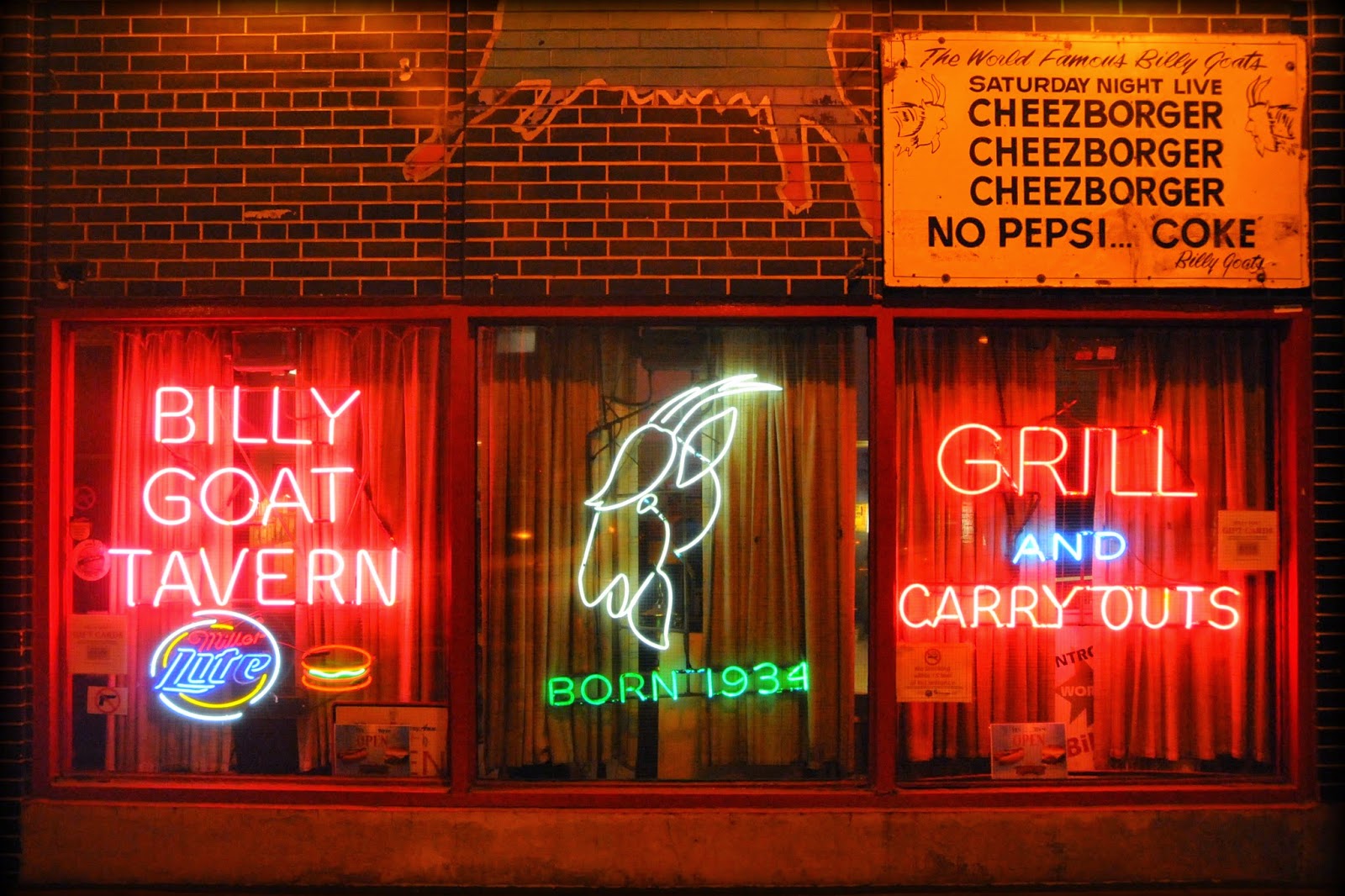 As soon as I walked down the steps into the Billy Goat, the woman behind the counter yelled out to me, Double Cheeborger the best!  No fries, chips!  No Pepsi, Coke!  Whatdya want?

And of course I'm thinking that the ghost of John Belushi is hovering just out of sight, nodding his appreciation that the more things change, the more they stay the same - and that the Billy Goat Tavern hadn't changed since he lived in Chicago and so he was happy, very, to see that the welcome I received was the welcome he used to receive.

Naturally, I ordered the Double Cheeborger.  I asked for Pepsi just for fun, and I got looked at like I was an idiot.  No Pepsi, Coke! she yelled at me again, so I went with Diet Coke, right?

Then I ordered a Metaxa, and tipped Bobby-Behind-The-Bar very well.  I asked him if he believed in the Curse.

He asked me if the Cubs had been to the Series lately.


I asked him if the Curse could transfer to the Giants - was Chicago like Ebola, infecting others by direct contact?

I wasn't sure if that was a yes or a no - Greeks, we can be mysterious.


After the Billy Goat, my goddaughter hit me up on Facebook.  Sara had read what I wrote about the Curse, had read that Karen and I would be in Chicago - and she wanted to know if we were still in Chicago because she had moved there two days before.

My mom would say the Lord works in mysterious ways - or the Greek version of that, but it doesn't translate well - and so while Karen was off speaking at her Conference, Sara and Joel - her boyfriend - and I met at the bar in Michael Jordan's Steakhouse.  When we texted one another, it turned out that Sara and Joel happened to be just a few blocks away from our hotel, and since Mr. Jordan had conveniently opened a restaurant in that hotel, we'd meet there.

That was a happy reunion, and the Ernest Hemingway Daiquiri the bar offered was divine, and we decided that it was good luck, right?  That we were both there in Chicago at the same time?  We made plans to watch the Game together in a few hours - maybe at a bar near Wrigley.  Of course they lived just a few blocks from Wrigley - I mean, of course.

In the meantime, I'd hit the Art Institute - only, as I headed down that away, a barker caught my ear and said the Architectural Boat Tour was leaving in five minutes.  I'd just make it if I ran, he said - and since numerous folks had said it wasn't to be missed, first among them my brother, George, I went.  What the heck.

The two most important things I learned, while nursing a Revolution Ale aboard the boat:  1. Chicago has more than thirty bridges that cross its rivers, and the very first one?  Way back when?  It was built to provide access to the bar on the other side.  2. The dark green and gold Carbide and Carbon Building was designed to resemble a champagne bottle.  Both of these facts made me love Chicago.  A lot. 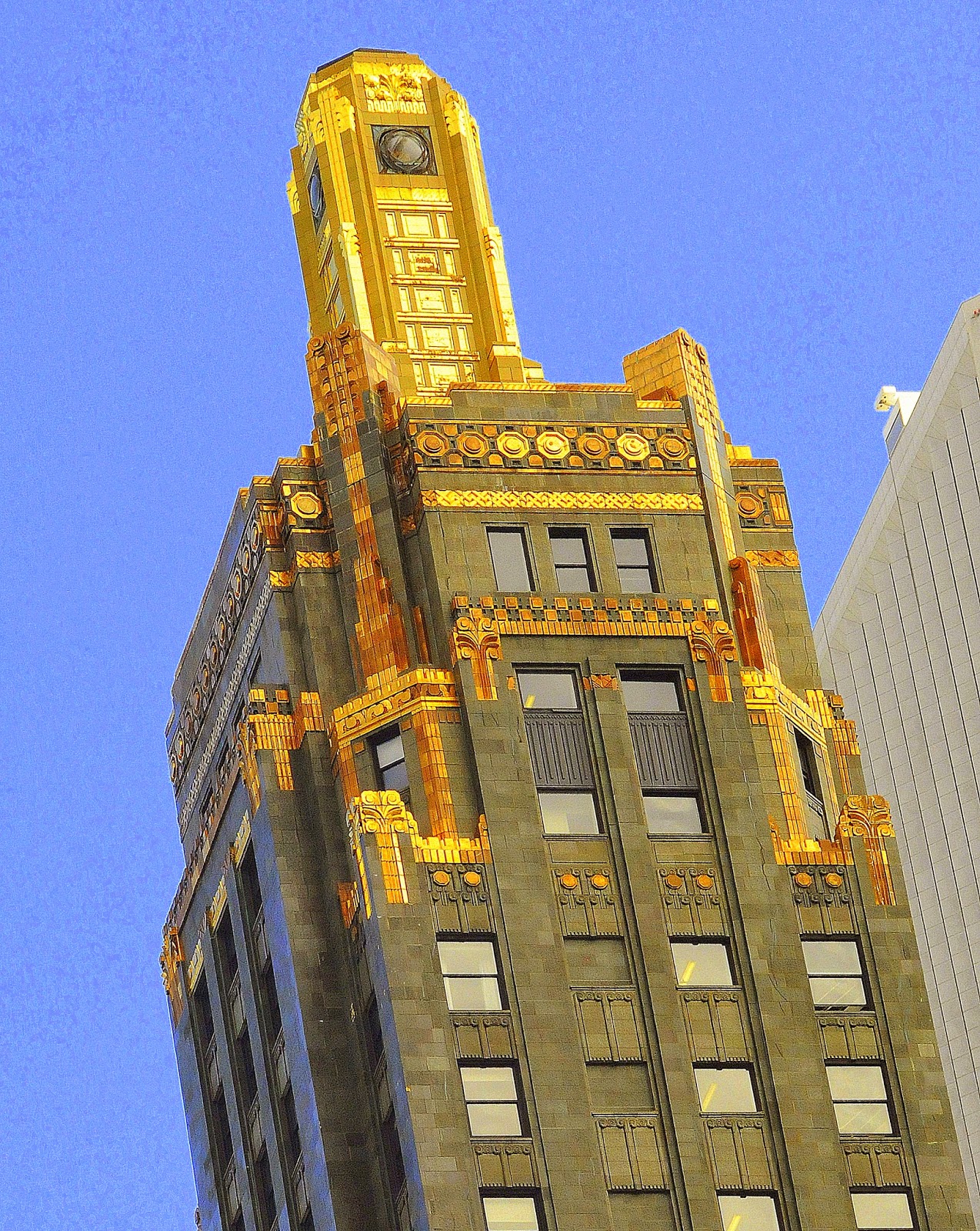 Karen wasn't up for watching the game - she'd been fighting a cold, and while she had rallied to speak at her Conference, she was going to try and rest for a few hours, so I went ahead and met Sara and Joel at Murphy's Bleachers, a bar just feet from Wrigley Field.

The game, alas, did not go well.  In one of the few instances of an October misplay by the Giants, Madison Bumgarner would hurry a throw to third base - when there was no play to be made at third - and that errant throw would dart past Pablo Sandoval covering the bag, and when the dust settled, two runs had scored.  To say that the error was uncharacteristic for the Giants - the Giants who had begun to solidify the myth of Invincibility that surrounds them in October - again, to say the play was out of character would be a phenomenal understatement.

But it happened and the boys in Orange and Black would have to rally.

While we were wishing this would happen, Sara suddenly grabbed my arm - beer sloshed out of my glass while Sara pointed to the tv above our heads.  That's Elene! she shouted.

And sure enough, our cousin and her boyfriend, Tim, were right there, no longer only in San Francisco cheering on their team - our team - but there with me and Sara in a bar in Chicago.


It had been a good omen when I spotted Richie and Aaron on the television during Game One, right?  There they were, these two whom I'd spent many a Spring Training with - and Game One had turned out brilliantly, hadn't it?


Would it work again?  Would glimpsing our cousin help to keep the bad mojo at bay?  Did we really believe that by being in this cursed baseball town we were somehow bedeviling our Giants?

Sara may not have thought so, but I did.  That Greek Curse was powerful magic - Mr. Bumgarner throwing away that ball...

Sadly, seeing Elene and Tim was not enough to turn bad luck into good.  The Giants' streak of ten Postseason victories in a row came to end on Monday night.

Sure, Sara and I had a great time catching up in this most improbable of Chicago meetings - I'd never been to the city before, and she'd been there for all of 48 hours.  Sure, it was a pleasure meeting Joel, and his dog, Otis - Otis who made more friends at the bar than I did. 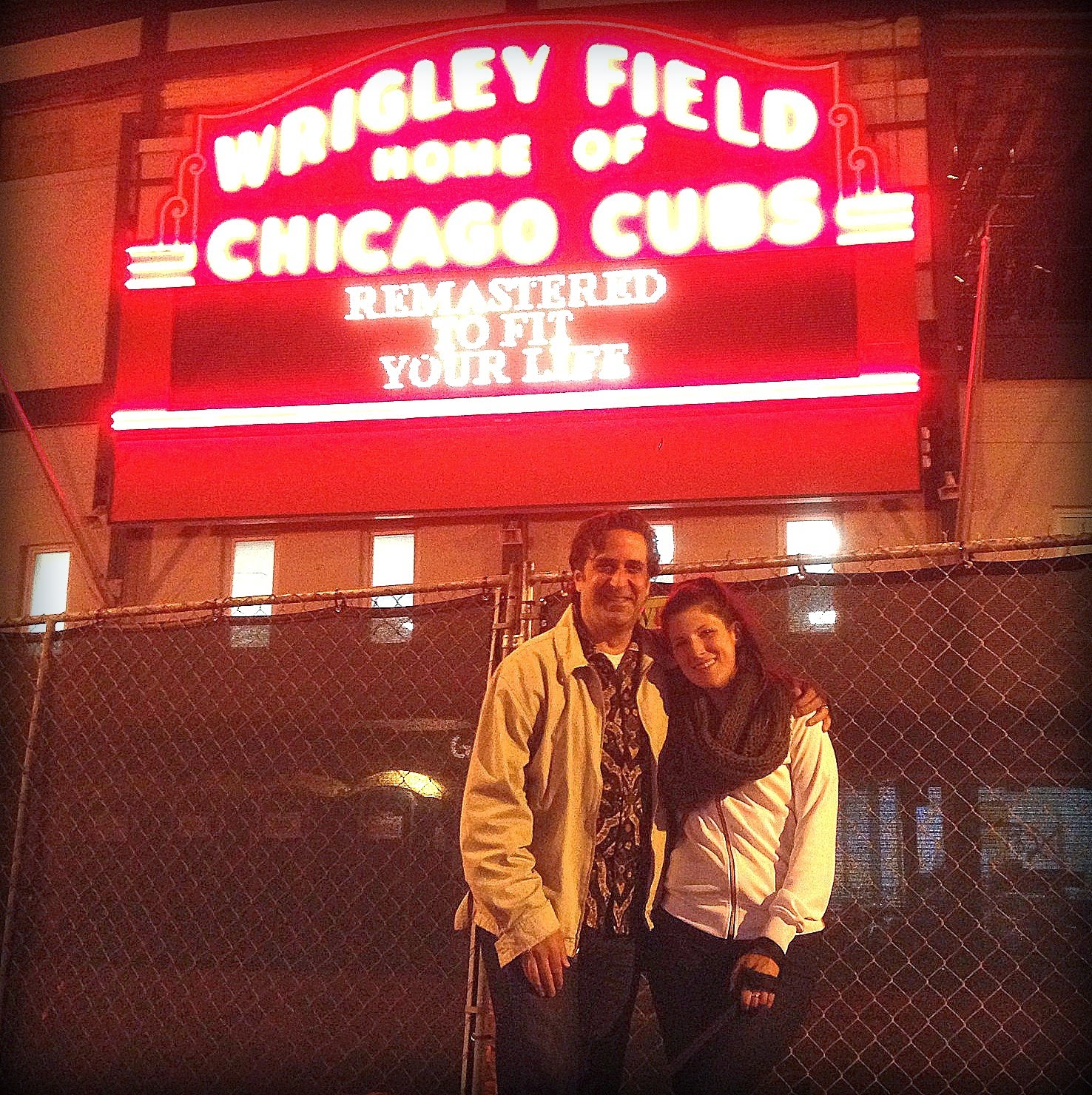 But - the Giants lost.

I'd head back to the hotel, find Karen up and about - checking her email.  She swore she felt a little better - that we should strike out and go find some of that famous deep dish Chicago pizza everyone always talks about.

Back home in Alameda, having Zachary's pizza was part of the ritual during the Giants' October runs in 2010 and 2012.  Zachary's is deep dish - what if, could it be?  Why hadn't I thought of that earlier?  What if getting some original deep dish was good luck?

Giordano's was within walking distance - and the pie was indeed good.  And on the walls behind the tables, names of famous Chicagoans had been stenciled.  Mike Ditka, Oprah Winfrey - and there, directly behind Karen?  John Belushi.  If you look closely, you can see his name. 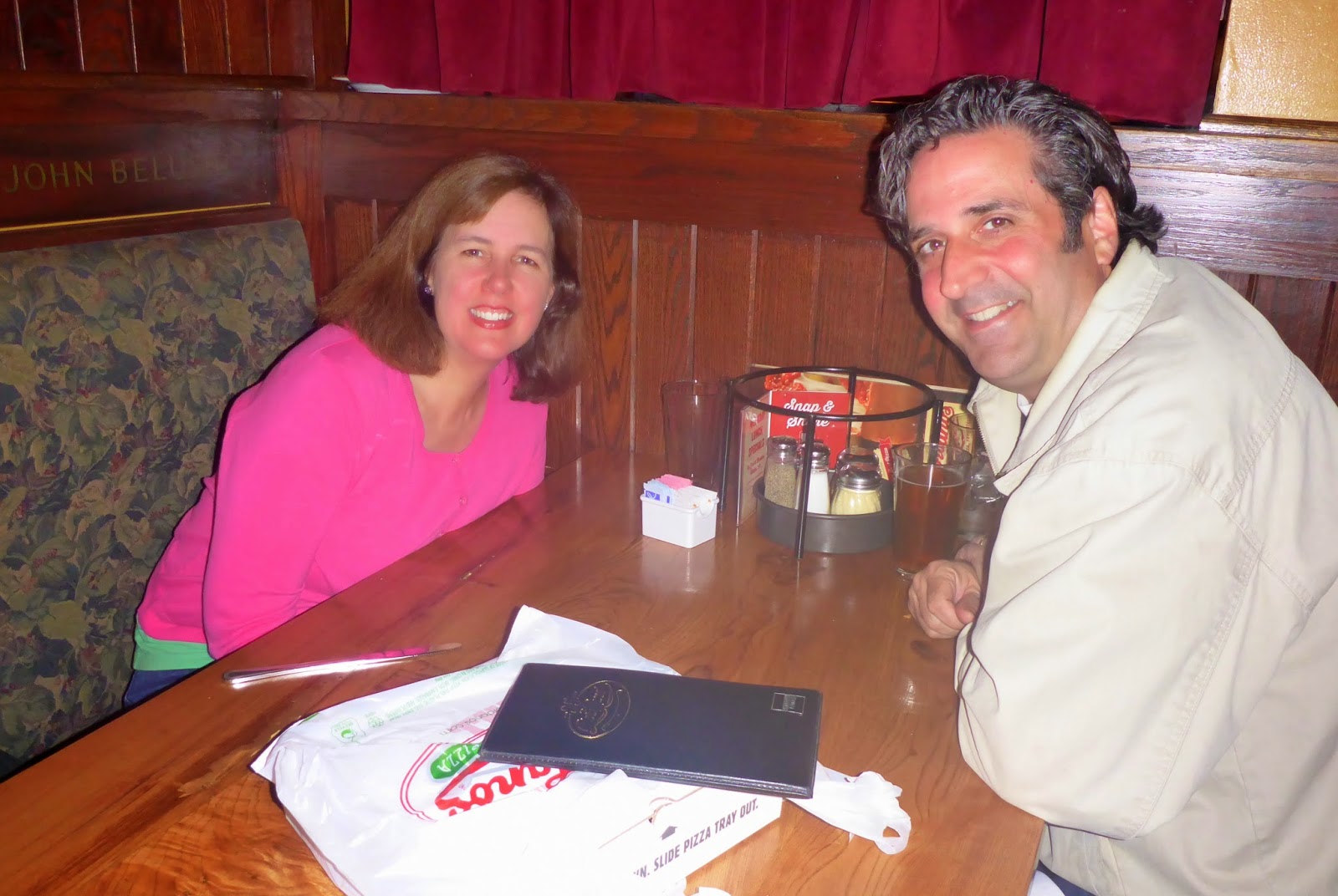 A superstitious man might take that as a sign - that in the very place where we were trying to dispel the bad, John Belushi's good name should appear.  The name of the man who had made the Billy Goat Tavern even more famous than it already was.

Could Mr. Belushi have made this appearance to let us know that he approved?

Or is that just silly?