It's the last day in our quick Chicago trip - Tuesday, October 7th - and Karen is attending the second day of her conference.  Before that, though, we're going to head to the American Girl store.  My Chicago friend Stacey was worried - she thought we had our own girls with us and warned that a visit to AG with the kids could have been disastrously expensive.  Since it was just Karen and me, though, she figured we could do some damage but still make it out alive. 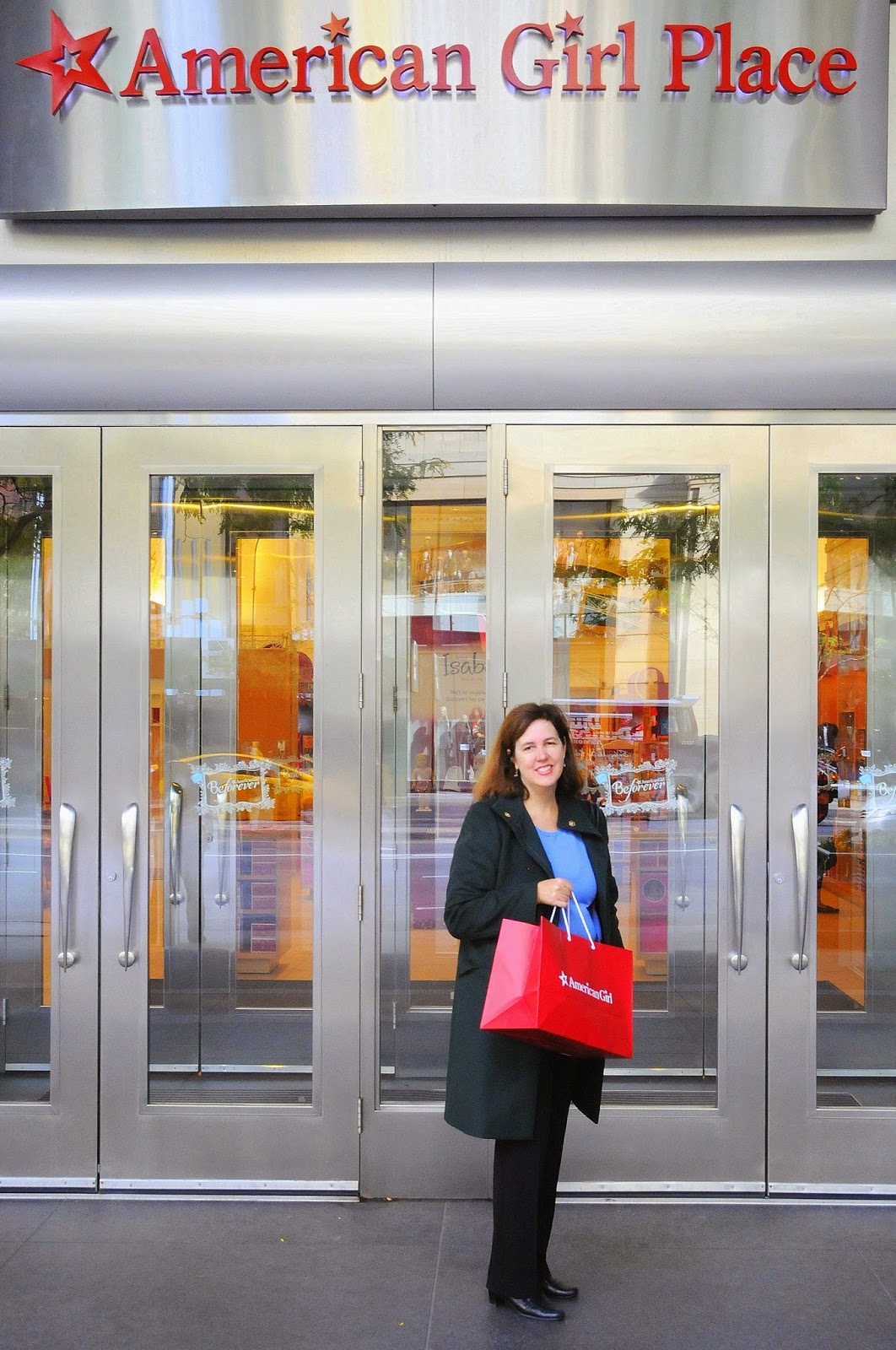 If I was keeping score - our hotel (check), the Billy Goat Tavern (check), an American Girl emporium (check), all on Chicago's Magnificent Mile?  Not bad, Windy City.  Not bad.

On our way back to the hotel, some of Chicago's finest stared at us, peering out from the Water Works. 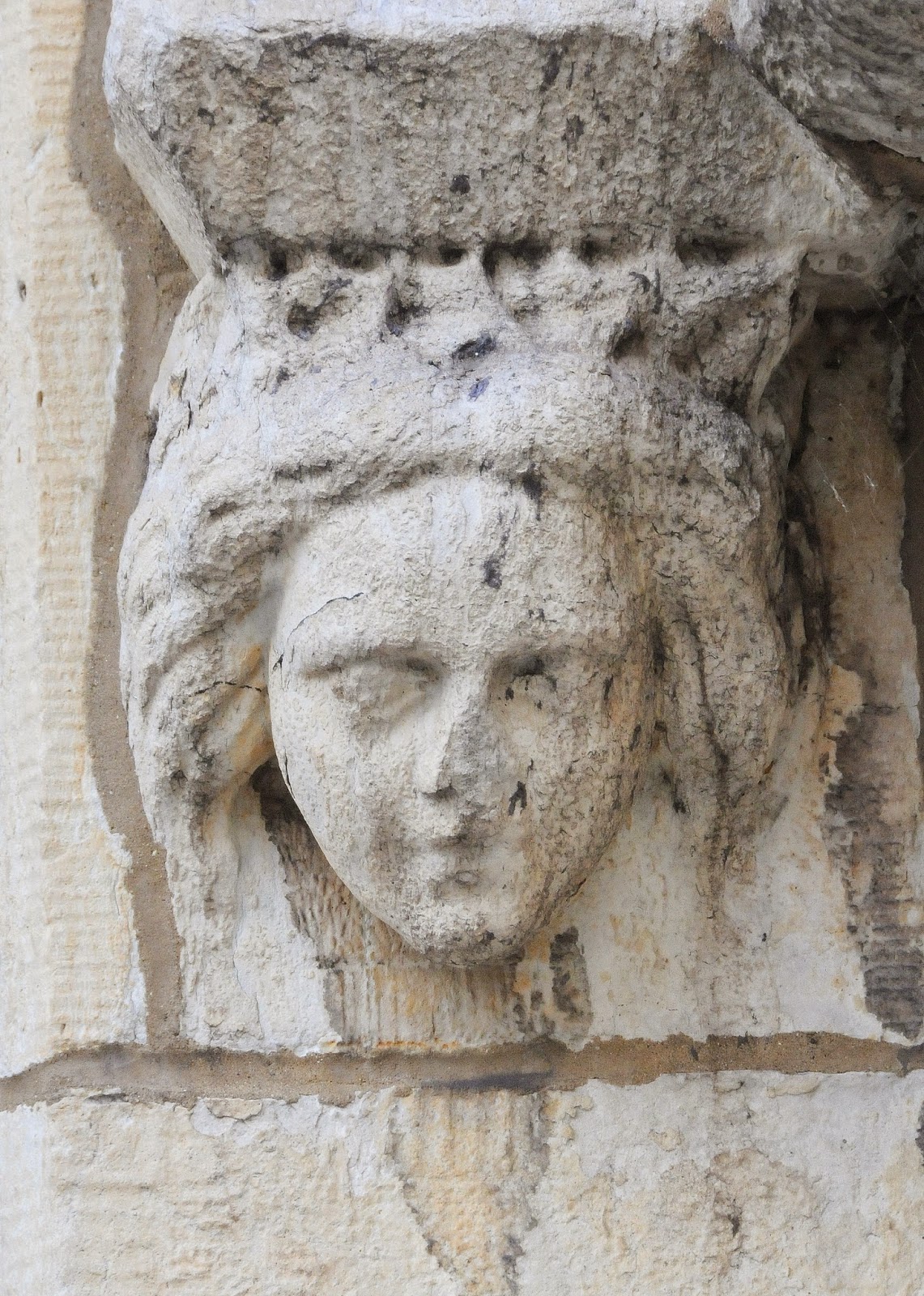 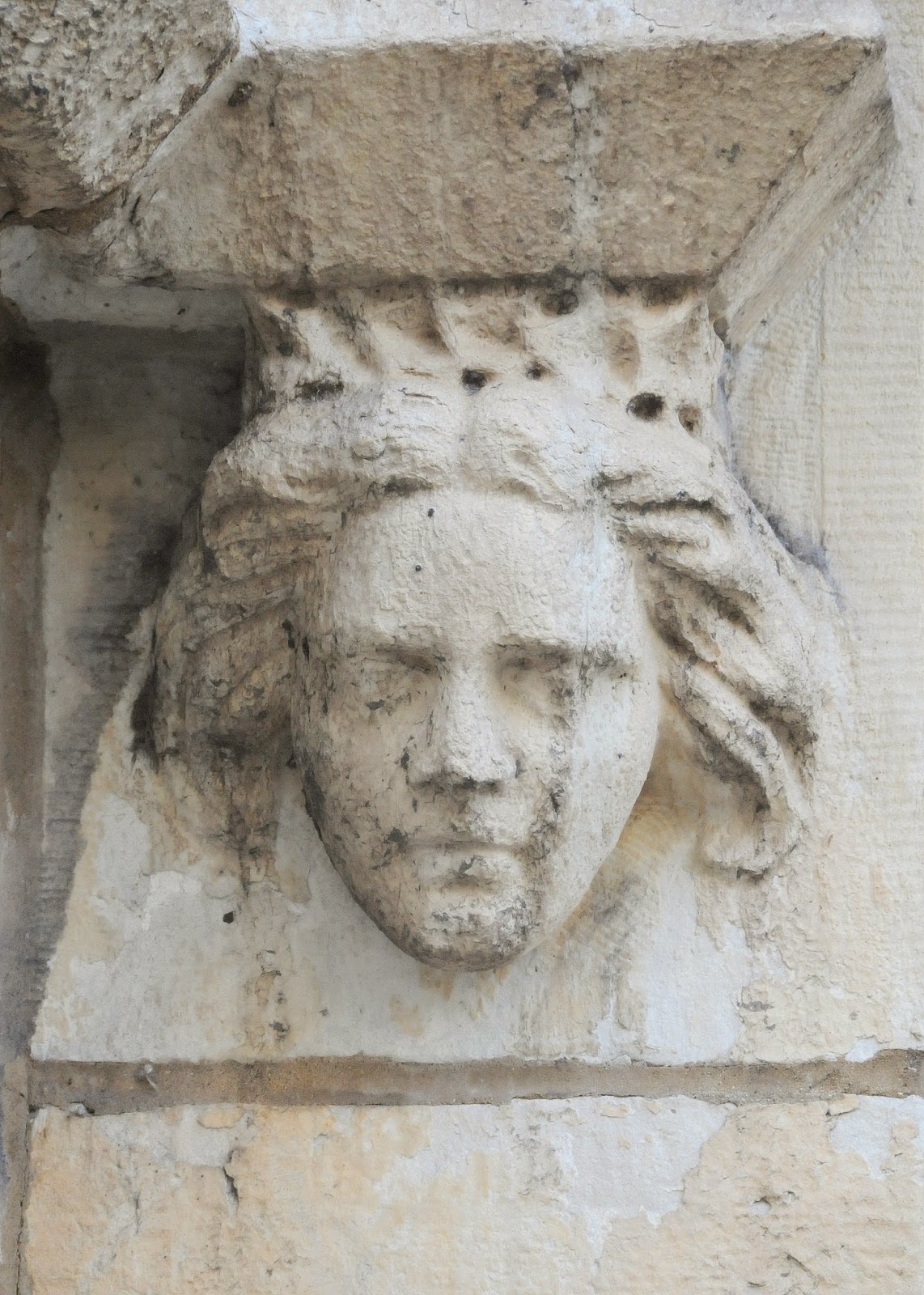 Getting there took me past some of those singular Chicago buildings I floated by the day before, like the corn cobs of Marina City on State Street. 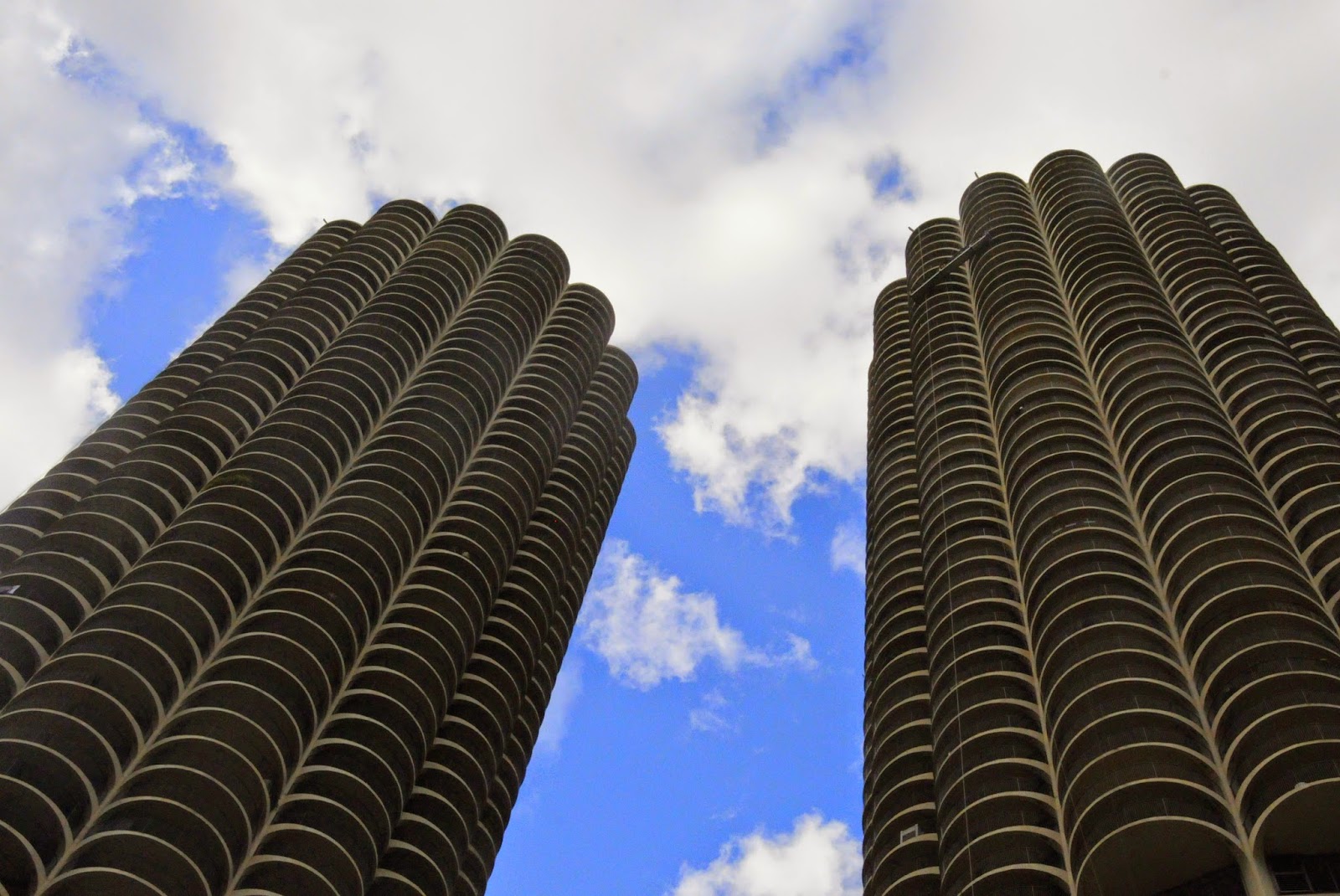 When I got to the Art Institute, I ended up with about an hour to spend there - which is like giving yourself sixty minutes to learn Greek.

Two great exhibits that I ran through:  Magritte, the Mystery of the Ordinary, 1926 - 1938 and Heaven and Earth, Art of Byzantium.

Just phenomenal, both.  To see Magritte's painting, This is Not a Pipe?  That image I've seen hundreds of times?  But to see it in person?  How beautifully it's rendered?  The colors that no reproduction can capture?

Or the pieces in the Greek collection?  So many stunning works - like one of the icons deep in the exhibit.  It shows Christ on the Cross with the Virgin Mary on one side and a second figure on the other.  It's so large - and gorgeous in gold.  But at some point after the fall of Constantinople, the icon was disfigured - the faces of the three figures gouged out, possibly with the tip of a sword.  This kind of defacement was common, and when I told my mom about it, she made the sign of the cross and muttered something under her breath.

And honestly?  I shared her disgust - the defacement of art or icon is small minded.  Stupid.

Of course, then I told my mom about the gorgeous Head of Aphrodite that begins the show.  A wonderful marble bust from the First Century - the curls in Aphrodite's hair?  How it's seemingly cinched in the back?  Incredible.

But what really draws your attention in this amazing display of the sculptor's art is the cross crudely carved into her forehead.  Just hacked into her (once) smooth skin.  Also begging for your attention is the fact that her eyes have been attacked, as if the madman had tried to blind her.  And the clumsy chiseling on her mouth in an attempt to, what?  Silence her?  But those rough strikes like those elsewhere on her face - perpetrated in this case not by a Turk conqueror of the Byzantine Empire, but by an early Christian wreaking the same kind of havoc on a symbol of a religion not his own.

We've been doing the same thing for thousands of years, with no end in sight.

The Nats were the pride of the league and were picked by most every pundit to win this Series.  With some ease.

So we left Chicago - flew out of Midway International - had been in the air for some while before the game began.  By then I had made friends with two guys - Monty and Nick - in the aisle across from ours.  They were returning to the Bay Area after attending a convention for Wendy's franchise owners.

I sipped my Diet Coke, thought about it, but then finally shrugged.

Because we don't cut corners! he said, and he and Monty gave each other a high five.

Not only were these two cracking wise, they also had a tablet that they fired up mid-flight to catch the Game.  I strained my neck trying to follow the action until Nick turned the tablet all the way around so that he was straining his neck and I was watching comfortably.

That's totally unnecessary, I said, not sounding even remotely convincing.

No, it's fine, Nick said.  I can watch it easy, no problem - and his solution was to put it practically in his wife's lap.  She had the window seat and was a real trooper who let her husband inconvenience her so that I could watch the game.

Right?  A round of applause is in order.

I got a little loud early when the Giants scored a ridiculous run in the second on a bases-loaded walk, and got even louder when they scored again immediately on a Joe Panik ground-out.  Karen told me to pipe down, which was understandable.  The lights on the plane were low, some people were trying to rest - but in my defense, your Honor, the Giants were battling for the Series victory, and they had just scored the first run by dint of a walk when the bases were drunk.

The play of the game, another one that made me get loud and that made Karen remind me that we were on a plane and not in the stands at AT&T, was when herky-jerky Hunter Pence threw his body into the wall in deep right field as he stole extra bases from Jason Werth.  Slammed his body into that wall, fell to the ground, but kept control of the ball the entire time.  Just a long - though violent - out.

In the seventh, after our plane had long since began its descent, all electronic equipment had to be turned off.  As soon as Nick's tablet was turned back on, we learned that Bryce Harper had again crushed another home run - tying the game.

The jerk - he's really good, but still - had a lot to say in the dugout after clouting his homer.  Thankfully, his grin was short-lived as the Giants scored once in the bottom half of that same seventh inning.  On a wild pitch.  With the bases loaded.

That's worse than a bases-loaded walk, which we'd already seen.

Karen and I caught this action on a tv at a bar in the very quiet Oakland airport.  Very quiet until that walk when it got a little bit loud - this time, Karen didn't bother telling me to keep it down.  She whooped it up a bit herself.

Did I mention that you do not throw a wild pitch with the bases loaded when the score is tied in an elimination game and you're the one in danger of being eliminated?  Alas, Aaron Barrett did just that and almost gave another run away when, on an intentional walk to Pablo Sandoval - the panda who had induced the wild pitch - Barrett threw the ball to the backstop.  While trying to intentionally walk the batter.

You don't see that kind of meltdown from a professional ballplayer in the postseason - and yet you did.  Fortunately for Barrett, Buster Posey was thrown out trying to score on that wild pitch.  Unfortunately for Barrett, the run he gave away was the deciding run, and the Giants would hold on to win 3-2 and take the Series from the deadly Nationals.

The Giants were not supposed to win this Series.  The Nats had the best record in the National League.  The Giants were a wild Wild-Card team.  An afterthought.

Before the series began, though, you'll remember that Tim Hudson, a southern man pitching for the Giants, had said that talent can take you only so far.  That the Giants had a little something extra between their legs that he thought would keep them in good stead.

The insinuation did not play well in Washington, D.C.  Did Mr. Hudson mean that the Giants had something the Nationals were lacking?

Tim Hudson has 16 years of major league experience to draw from, and he saw something in the Giants that many overlooked.  Was he a little bit crude in how he expressed himself?  Sure.  But polite doesn't win games.

And the Giants were not supposed to win these games.

And yet - no doubt helped by Karen and me getting away from Chicago and the Curse of the Billy Goat, the Curse that had felled the Giants, by association, the evening before - the Giants did win these games.  The Giants won.