The funniest hour I ever spent was at San Francisco's Holy City Zoo in witness to Robin Williams - furiously unscripted.  What made the night so special was that it was just me and six shitty comics in the audience.

Excluding my pal, Sean Murphy.  Sean's a funny guy.  Always was, always will be.  Still.  Just us and a handful of unfunny souls.

In my mind, Open Mic nights at the Zoo were early in the week, so it was an unremarkable Monday or Tuesday night in San Francisco.  The Zoo - long since shuttered - was the smallest comedy club I've ever been in, but it was also the most important.  Back then, when comedy clubs were relevant, anyone of note went through the Zoo, tiny though it was.  Heck, maybe that's why they did it.

That day, Sean had called and said he'd be heading out to the Richmond to take advantage of the free stage-time at the Zoo.  Did I want to join him?

It didn't (doesn't) take much nudging to get me to head into the city, so I went.  It was the middle of a cold San Francisco summer night, though, so no one else had come out.  Usually, the comics who take the stage have friends in tow and they're jockeying with all the other Funnies who want to take part in an Open Mic, making for a loud crowd.

That night?  Only Sean had let his fingers do the walking, so the audience was just the comics and me - each of them taking the stage to perform in front of catty rivals (even a bad comic can be funny if he's not on stage but in the crowd making fun of the comic actually trying to be funny).

So Sean performed - his sarcastic, bitchy best - and then another guy in grey tried to follow.  As soon as he was done, Mr. Grey asked if anyone had a light.  He, instead of even pretending to support the others who had gathered that night, needed his nicotine.

I always have a Zippo in my pocket, so I volunteered to head out onto Clement Street with Mr. Grey.  I sparked my lighter, he started puffing, and when I look up, Robin Williams is heading right for us.  Mr. Williams and a handler, or a friend - or some star-struck schmuck like me leaching onto the Star as he walks down the street.

Since I'm star-struck, I want Robin Williams' autograph - bad - but the only thing I've got on hand for him to sign is a manual on black-and-white photography.  It's in my bag, in the club, so I exit stage left to grab it.

When I come back out, Mr. Williams is chatting with the smoker, Mr. Grey.  Or being chatted to.  Mr. Williams seems uncomfortable with the attention being heaped on him by this up-and-not-comer, and here I am, about to ask for his autograph.

But he politely signs, and the handler or friend or schmuck-like-me grabs my book out of his hand and says, I'm signing, too.  And I say, Sure.  Go ahead.

Then I try to make some witty platitude.

Have you ever tried to make a witty platitude to Robin Williams?  Maybe you'd be better at it.  Me?  I sound like an idiot.

Hard to imagine, I know.


But Mr. Williams was kind.  Courteous and polite and kind.  How many times in his life had he been approached by an up-and-not-comer?  Or by a grabby fan who wanted a piece of him?  And yet that night, quiet in the cool, June fog of San Francisco, Mr. Williams cordially signed my book. 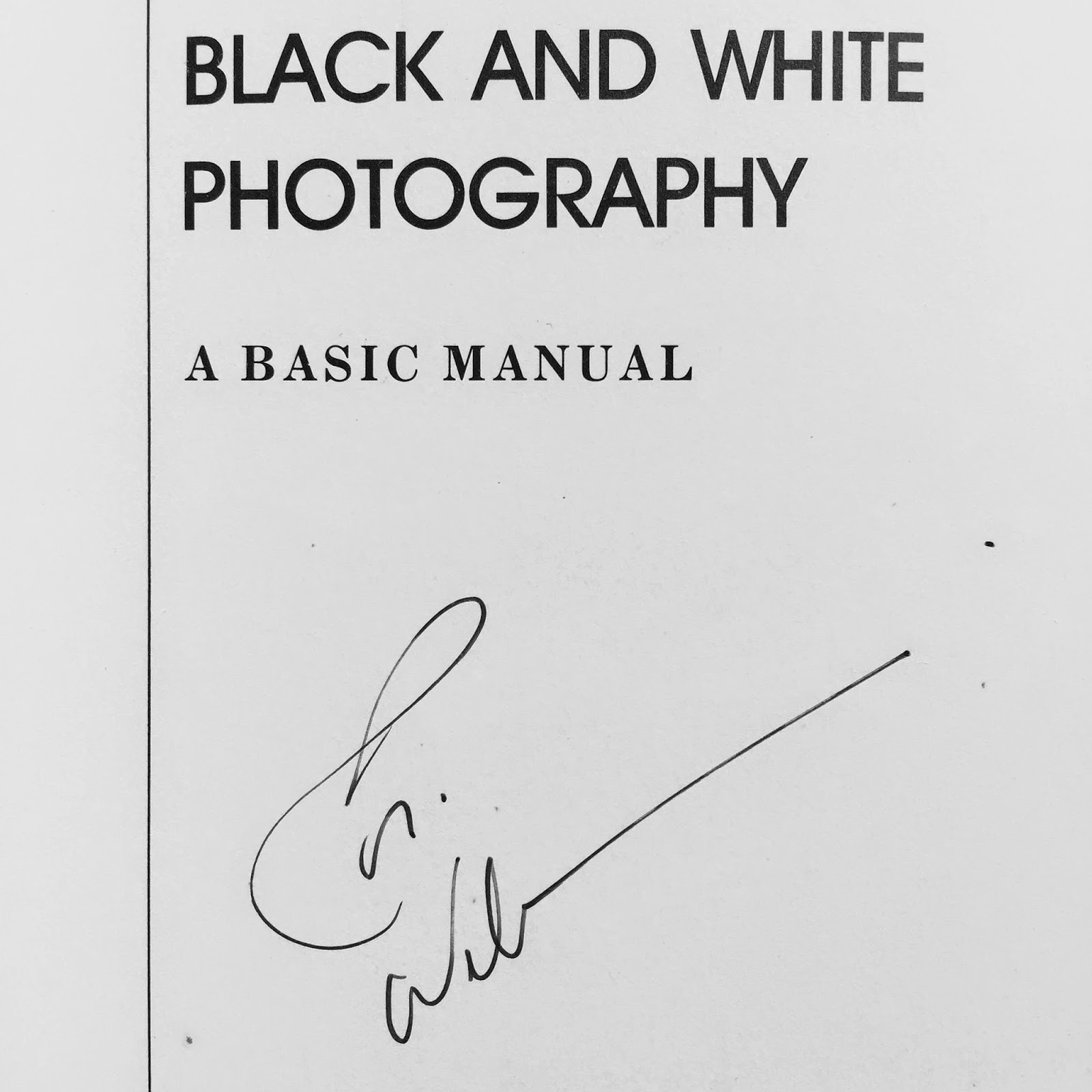 Then made pleasantries.  And then excused himself before he popped into the club.

Can you believe that? Mr. Grey said as he looked down at the hand that had shaken the hand of one of the most famous comedians in the world.  I can't believe it, he said.

Believe it, the handler/friend/schmuck said.  And stick around.  You ain't seen nothin' yet.


He was right.  Mr. Williams had just popped into the club to see if there was any room left on the bill for him.  During an Open Mic at the Holy City Zoo.  On an unremarkable weekday night in San Francisco.

I still enjoy picturing that conversation.  Especially tonight.  Especially right now.  I like to imagine Mr. Williams tapping the emcee's shoulder (Dan? Don?) and asking, Is it ok if I add my name to the list?  Do you have seven minutes for me?


I walked back into the club as Mr. Williams was walking out.  I found Sean in the second row of seats in that tiniest of comedy clubs with the smallest of audiences - and Sean looked at me and said, I already heard.

A little intimidating, I said.

Are you kidding? Sean said.  I've already gone on so I don't have to follow him - and my resume is about to get a whole lot better.

How do you figure, I said.


The Zoo's emcee also figured no one wanted to follow Mr. Williams, so Mork would take the stage last - and he wouldn't be watching the other comics.  Sean told me that some had accused Mr. Williams of ripping off their acts so he'd made it his practice not to watch others perform. If he didn't watch you, he couldn't steal from you.

So what if, in the midst of that mayhem, in the midst of his flailing stream-of-consciousness hilarity, Mr. Williams included a quip that he might have overheard from your lips in some smoky club in 1979?

When he did take the stage.  When Mr. Williams took the stage at the Holy City Zoo.

In front of me, a few comics, and the emcee.

Like I said, I think comics usually signed up for seven minutes on Open Mic nights.  That time could be extended if it was slow.  So that night?  They let Robin Williams have some extra time and what we witnessed was the funniest half-hour I've ever seen on stage.  Or screen.  Mr. Williams - uncut and unchecked.

Trying to wrap my head around the fact that this was the same soft-spoken man I had talked with earlier - out on the street pestering him for his autograph.  That quiet man bore no relation to the sharp, frenetic, loud and acerbic whirling-dervish who entertained us.  Mic in hand.  Mic on stand.  Comedian on stage.  Comedian in crowd.  Prowling back and forth, standing stock still - but the quips never stopping.  The observations and accusations and pyrotechnics never fading.

I've never seen anything like it in my life, I said that, right?  And he did it all for this rag-tag group of souls who had come in out of the cold to be funny for a few minutes on stage.  And then he lit the place on fire and it burned and burned - and after?

Really, there was nothing left.

I wish I could tell you what he riffed on that night - but the takes were so fast that you couldn't hold on to the last thing because you were already laughing at the next thing.

Damn, he was a funny man.


I'm remembering him tonight because my friend Phil let me know the news.  Let me know just a few hours after I delivered ice cream to my daughters on Main Street, U.S.A., in Disneyland - strawberry for Elizabeth, cookies-and-cream for Kristina.  Just a few hours after they sat on a curb, ice cream dripping from their waffle cones as they watched the Disneyland Parade angle down Main Street here in Anaheim.  And in the midst of that merry parade, in the midst of Marry Poppins and Bert on their carousel horses, Anna and Elsa on their frozen float, and Ariel waving her tail high above us all, one of the largest cheers erupting from the crowd was for The Genie.

Daddy! a little girl on her father's shoulders yelled, Look! Genie! and she waved frantically, trying to get The Genie's attention.

Would she have screamed so hard if not for the life that Mr. Williams breathed so terrifically into that character?

And then, just an hour or two later, Phil let me know the news via a tag on Facebook.

Phil and I worked together at Books Inc. on Chestnut Street more than ten years ago.  During our working time together, Phil and I helped Mr. Williams more than once when he came into the store to shop.

My God, the size of the stacks of books he would bring to the counter, with some of the obscure graphic novels he was interested in?  And his kids were as nice as he was - nice and courteous and always so polite.

So there he was - a quiet, kind, nice guy.  Just like the man I had met years before outside that comedy club in another part of the city.  It was like he kept that furious intellect on hold for the stage, or for the movies - that if he let it seep out, it would start to pour and then burst, so maybe he needed to keep it in check to prevent himself from drowning.

Except that one time when he was on Chestnut Street headed to Books Inc. and he poked his head into E'Angelo Italian Restaurant and hollered out, Arafat! Party of six thousand!

That was more how it was hanging out with Sean and some of the comedians he performed with, like Will Durst and Johnny Steele.  Those guys were on fire all the time.  I didn't try and keep up because I couldn't.

And no one could keep up with Mr. Williams when he was aflame.

Depression is brutal.  Brutal, arrogant, corrosive - pick your poison.  It's all of those, and worse.  So I'm sorry to read the reports I'm reading tonight.  Sorry to hear that Mr. Williams lost his battle.  That he couldn't keep the bleakness in check anymore.  That it burst.  That it finally made him drown.