BOOK/SHOP in the alley


This is a story about a book I found in an alley.  It's also got some booze, and dads, and poetry - so grab a chair and let me get you a drink.


I'd gone into the alley to get my hair cut.  I've done this before, and you can read about that here or here, but unlike those times, this time they were too busy for me.  After chalking my name on the board like I'd done in the past, one of the barbers looked at me, at my name there in white, and said, Nick?  You might want to come back in two hours.

So I shot that and left.  Grumpy.  Smacking my lips, but grumpy.

But then - surprise! surprise! - I had an impromptu business meeting with Cheri, one of the amazing book reps that we in the Bay Area are so lucky to have.  These fellow troopers - aiding us while we fight our good fight, providing guidance and support as we in the trenches tirelessly strive to beat back the amazonian money grubbers - these delightful reps who ceaselessly help us get wonderful books into deserving hands.

That day we had donuts.

But after, right next door to the donuts, there was the BOOK/SHOP at the end of the alley.  We were coaxed inside by its charming, unpretentious sign - and inside, with its fresh white walls and white shelves, it felt like more like an art gallery than a used bookstore, a gem no larger than my backroom at ye olde bookshoppe on Park Street.

But unlike the art in a gallery, the books here beg to be touched and then bought.  Touched and bought and taken home where they can be read, and looked at, where you can set them on a shelf next to that silly photo of you from fourth grade, or where you can drop it next to your bed, dropped the night before when you fell asleep reading the amazing book you found that day in Oakland.

Space is precious at the BOOK/SHOP, so the few items they have for sale are elegantly displayed.  Books, yes, but - as Erik courteously explained after we asked - it's also a shop about books.  So books, yes, of course, but also prints and paintings and broadsides dealing directly with poets & novelists, writers of fact & fiction. . .

Perfume?  Sure, if it's in a bottle labelled In the Library.


Bookmarks?  Naturally, but bookmarks that are more slim pieces of art than anything else.  Or how about a small tub of the paper-and-book cleaner made by Absorene since 1891?  Yeah, they have that.

But the books?  Oh, the beautiful books.  Because BOOK/SHOP is modest in size, their inventory changes quickly.  Week to week, we were warned, you might find yourself in the same BOOK/SHOP but stocked with entirely different books.

And again, those beautiful books.  I was especially taken by a first edition of Nobel laureate Gunter Grass' novel, Cat and Mouse.  It's book #2 in his Danzig Trilogy, the trilogy that began in 1959 with The Tin Drum and ended with Dog Years in 1963.


Even though the spine of Cat and Mouse was sun-faded, this copy was a charmer because of the inscription.  I often steer clear of books that have been marred by book plates or scribbled names - just one more example of people pissing on their things to mark territory.  So I usually don't go in for that kind of thing - unless I do.  Unless it's something written by the author, say - or unless the inscription is particularly beguiling.

This inscription was just that.  It was written in blue ink by a Father to his Son on the occasion of the Son's birthday.  Father quoted Thoreau, then quipped something ridiculous, and then - but then - Father signed off with:


And there's an entire novel there, right?  A novel hidden in plain sight on a flyleaf?

I should have purchased the book - but I had excuses.  Sun-faded, remember?

It's just after the holidays and I shouldn't be treating myself to baubles, no matter how pretty.

Under the inscription, a later owner had signed his name in bold black ink, and I've mentioned before how I feel about the piss-markings inside books, yes?

So I didn't buy the book, but I told its story to a number of different friends, and the more I told the story the more I wanted to own the book--


--because that inscription was so rich in a shared history.  Father to Son.  Reader to reader.  Heck, maybe the signed name at the bottom of the page was the Son.  What if it wasn't inked there by a later owner but by the recipient himself?

I went back to the alley a week later, on Friday.  First to get my haircut.  Second, to take another shot of the Masterson's on my way out of the barbershop to buck up because I was worried - worried Cat and Mouse would be gone because we'd been warned that the stock changed quickly, worried that it had been purchased by someone smarter, someone better at taking notes.

Like I'd been told, the store's interior had changed radically from my first visit - and Cat and Mouse was gone.  The shelf where I'd seen it the Friday previously was taken by a manual of decorated typefaces.

So I spritzed the inside of my wrist with the Library perfume as consolation and was about to leave when I saw it - someone had been perusing Cat and Mouse and then had left it on the reading chair when they had gone.

I picked it up and read the inscription again.

Thoreau says:  "I was rich, if not in money, in sunny hours and summer days."

Yours in sobriety and in happy birthdaying you.

Did you know it's from the personal library of Douglas Blazek? Erik said.

I had no idea who Blazek was but I could feel a vista about to be revealed as Erik took Cat and Mouse from my hand and pointed to that black signature under the inscription.

He was a contemporary of the Beats, Erik said.  A published poet who also published others.  Blazek brought attention to writers like Bukowski - and here, Erik's voice grew stronger, not quite like a preacher who's found a willing congregant, but awfully close.

Let me show you, Erik said, and he handed Cat and Mouse back to me and went to the small stack of books and pamphlets that seemingly had just come into the shop, that hadn't yet been placed in the perfect light to showcase their beauty. 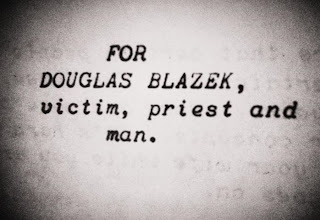 He carefully removed a copy of Charles Bukowski's poems written before jumping out of an 8 story window from its protective sleeve.  Here, Erik said, and he showed me the dedication.

It's funny, I said, that you have so few books but that you have both these books here at the same time - speaking to each other.

I asked if I could see the copy of the Bukowski collection.  It was in the format of the hundreds of 8x8 kids books that we have in the store.  A few dozen pages - bound flat, without a spine.  But this was no book you'd hand to a first-grader, not a Little Golden Book to read with grandma.

It appears that certain people, Bukowski writes by way of introduction, think that poetry should be a certain way.  For these, there will be nothing but troubled years.  More and more people will come along to break their concepts.  It's hard I know, like having somebody fuck your wife while you are at work, but life, as they say, goes on.

When was this published? I said, and Erik picked up the phone and made a call.  The Bukowski collection was too expensive to buy, but the serendipity of it being here after I came for the other - of Blazek owning the one and being mentioned in this...

Cat and Mouse, I said.  Was the inscription to Blazek?  Was it his birthday?

I don't think so, Erik said.  I think Blazek came into possession of the book later.


Cat and Mouse had to have belonged to Blazek, right?  Had to.  It'd make this all so much better if - before Blazek became the publisher of Bukowski, before poems written before jumping out of an 8 story window had been dedicated to him - if before all that he had been

Sitting in my car, I notice a part of the inscription I hadn't before - Father had dated it, in the smallest print possible - upper right corner - 12/31/63.

And Blazek had signed his name, followed by 1963 - had to have been a gift to him, yes?

Wiki told me Blazek was born in 1941, but not the day.  Who does that?  Include an entry with a birth year but not birth date?  Couldn't they have checked Wikipedia?

I dug around a little bit more until I stumbled across a blog, Writing the Polish Diaspora (who knew?), and in this post, I discovered a certain shiny nugget about Blazek's upbringing:

I was born in St. Elizabeth’s Hospital, Chicago’s west side, on the last day of 1941.

So here I am with this great copy of Cat and Mouse by Gunter Grass, about the craziness of growing up in Poland after the war, dealing with that long shadow - and it was owned by Douglas Blazek, given to him by his father on his 23rd birthday, just before Blazek would write his own books, just before Blazek would be part of an important poetry underground that would end up lifting all letters high.

All because I walked down an alley into a BOOK/SHOP.  You should, too.  As their card says, it's not just a shop selling books, but a shop devoted to them in all kinds of ways.

Where you're bound to stumble across a little bit of history that's going to resonate.

Go shop at a real store - go get your hands on a beautifully made book - read an inscription from an earlier time - imagine its history - revel in that, and the book - and then go back for more.

Only, if you do, promise you'll tell me about it.