A Barbershop of his Own


I drop the kids off at Karen's office in Oakland and realize I'm awfully close to the Donut Savant.  It's up Broadway kitty-corner to the old I. Magnin, that beautiful store fronted with green marble.

So I head there and the exact same parking spot is open as last time - the one that's just a space from the end of the block.  I snag it and head out into the rain.  I walk into the Savant, and there are just a few donuts left.  But some of the ones that remain?  They're Tannenbaum donuts - I've never before seen such things. 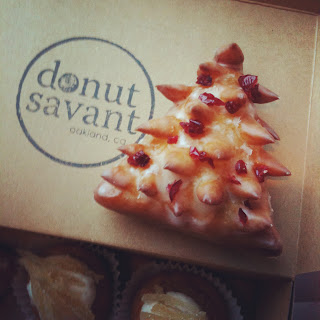 I buy some for the girls.  The maple-salt donut holes?  I get those for Karen.  Then I see candied ginger strips atop butter-cream frosting.  I score those, maybe just for me. 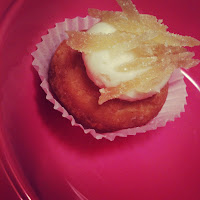 I ask what time they close up shop there at the Savant.  The woman behind the counter, she takes my Diet Coke from the cooler and says they close at three.

She smiles and says it's my lucky day.

I'm getting buckled in my car when I realize that since Karen has the kids, I have a few hours alone on this rainy East Bay Friday.  Where was that barbershop Josette told me about?  I don't often get my hair cut, but I usually do so in December.  It makes my mom happy.

Josette had told me about some hipster barbershop in Oakland's Temescal district  I punch those words into Google and boom-shacka-lacka, I'm only five minutes away.  So I gun the Accord away from the curb, turn onto Telegraph, and head up to 49th.

When I get close, I land another terrific parking spot.  Now the rain is coming down good, and I shouldn't detour into the crappy thrift shop there on 49th, but I do.

It's junky, cheep and cheesy.  The Christmas stuff in the front - Santas made out of yarn, drinking glasses that are the opposite of elegant, Styrofoam ornaments - there's nothing cool to this kitsch.

Until I get to the back.  And in the back?  Against the wall?  Cocktail glasses.  Galore.  Time's a wastin, but lordamighty, I've hit the mother lode.  Before you could sing two Turtledoves, I've raked up five glasses.  I take em to the counter and ask the guy how much they'll set me back.

How about seven? he says.

Suddenly I'm seven buck poorer but infinitely richer.  He wraps em in some old Tribunes, bags em, and I'm on my way.  I throw em in the car and turn right onto 49th.

Across the street I see the sign.  So this is the place. 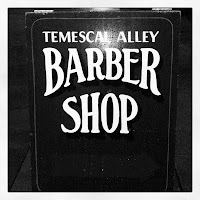 Temescal Alley is just that, an alley with ramshackle buildings on each side - long, low buildings, each separated into four of five small spaces.  Fifteen feet square?  Something like that.  But they've been given face lifts - skylights, the bricks making up the back wall have been scrubbed down and cleaned.  They've been turned into art galleries, coffee shops, and of course, the siren call for me - a barber shop. 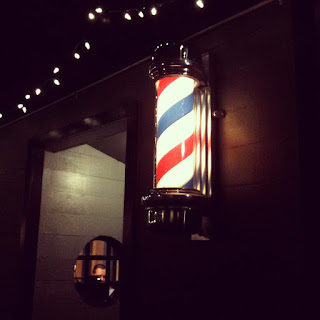 I know there's something good in store when I see the barber pole gleaming like a beacon through the dark afternoon.  There are a few guys hanging around outside - talking on their phones, drinking coffee.  I poke my head into the shop and see four barber-chairs, occupied.  Six more guys are sitting in the tight space, waiting their turn.  Sitting on chairs, the chairs on the hex-tiled floor.  There's a chalkboard on the wall with many names - Zeke, Mike, Ted.

I add my name to the list just before one of the barbers takes a towel and wipes the names from the middle column - names that had been crossed out, now all done, haircuts completed, the names wiped away by a young man wearing a leather smock - kind of Sweeney Todd, Tracy will comment.  But somehow testament to the seriousness with which they appear - at first glance - to take this endeavor they've embarked on.

In the corner is a cabinet.  On the cabinet is an RCA Victor radio tuned to a station playing something cool, something hillbilly.  Inside the cabinet are pomades - the brand is called Cock Grease.  There's a rooster on the tin, ok?  A rooster.  They've also got unbreakable plastic combs for sale.

And there, on the bottom shelf - two bottles of booze.  Bulleit Bourbon and Maker's Mark.  Just sitting there on a towel with three shot glasses lined up in front of them.

This is my kinda place.

There are at least fifteen names ahead of mine on the chalkboard, so I head back out of the steamy shop and into the rain.  I try on some vintage boots at one of the shops across the alley.  Then into a popup shop manned by the gent who's the King behind the King Bag Co. of Oakland.

Bobby Glasser, the King?  He sat in front of a wonderful selection of his bags.  You want these, ok?  I got some coin purses for the girls - two blue for Elizabeth, two red for Kristina - and a black one for me.  I scored a photo album for Karen made by some crazy iron artist - an artist who works in iron, not an artist of iron.  If the Heat comes looking, I'm strapping this album with its iron covers over my heart like The Man With No Name in A Fistful of Dollars - it'll protect me like Eastwood's metal plate protected him. 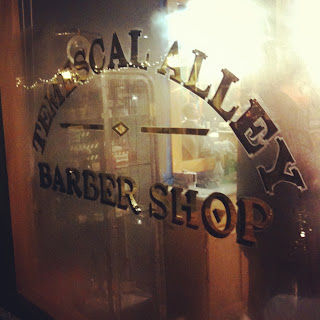 I head back into the barbershop just as one of the barbers calls my name.  The guy who just vacated my chair is some kind of tv star.  Everyone seems to know who he is, but I don't.  It'd probably help to have a tv.  Ah, well.  They're all agreed he's a swell guy who always stops in when he's not in LA shooting.

I sit in the chair and my barber with his slicked back hair and full sleeve tattoos fastens a smock around my neck.

The bourbon, I say.  Is that just for show?

He doesn't hesitate.  It's always there, he says.  You don't have to ask.


Do you hear angels singing?  Because I do.


Now, he says, as a new song starts pumping out of the RCA (White Shirts and Rain.  I'd tell you the lyrics, but there might be women present.)

He's looking at my hair kind of funny.  It's long.  I hate haircuts, so I get a cut about once a year.

A little trim? he says, as he starts running a comb through it.

I don't know what high and tight means, not really, but I'm trying to adapt to the situation.

What? he says.  You mean you want a proper haircut?  A real one?

He smiles and starts to clip.

Just then another guy comes in out of the rain.  He's got a cup of joe in his hands and one of the other barbers says, Hey, if you want to Irish that up a little, it's right over there, and he points with a black comb to the cabinet with the bourbon inside.

Irish that up, I'm thinking?  I used to hate haircuts, but I think I've found my people.

My guy is still snipping away, kind of chuckling to himself as he says, Say goodbye! while he lops off another chunk of hair, another chunk that lands in my lap.

Never had a proper shave.

Not a lot of time passes, and I'm done.  I hand him some double sawbucks, get back some change.  Help yourself, he says to me.

So I do.  I open the cabinet and pour a shot of Bulleit.  It feels good going down, like bourbon should.  I thank him, thank everyone, and head into the night.

Did I mention that I think I've found my people?  Because I have.  Just a few days before Christmas, and I found them.

I just might start getting haircuts kind of regular.  If you need to Irish up your coffee on a cold Winter's night in Oakland, you know where to go.
Posted by Nicky P. at 4:13 PM