The first time Karen and I saw Dave Brubeck was when he performed with the Pacific Mozart Ensemble in the '90's.  We'd gathered in a church in San Francisco - which church? which church? my memory fails me - and awaited the great man's entrance.

When he arrived, Mr. Brubeck was led up the middle aisle - I think by his wife (again, memory, oh, mercurial memory).  Mr. Brubeck needed help - navigating the aisle wasn't easy.  He was in his 70's, and not spry.  There was one intake-of-breath moment when the steps leading to the front of the church made him stumble.  But Mr. Brubeck caught himself, and turned around, and we applauded.

Joining him that night - in addition to the PME - was his long-time cohort on bass, Jack Six.  Such a big man, with such big hands.  How did he make such exquisite music come from the strings when his fingers were so big?  These were the fingers and hands of a bricklayer, a lumberjack - and yet.

We didn't know what to expect, not really, especially after we saw the pains Mr. Brubeck endured to get near his piano.

But then something amazing happened.  Dave Brubeck sat at that piano, and when his fingertips touched the keys - it was like he received an electric shock.  Energy seemed to flow out of the piano and into Mr. Brubeck's body and suddenly he was invigorated - and the music poured out.

When the energy was too much, Mr. Brubeck was lifted up off his piano bench with whoops, with hollers.  His hands and fingers fed off the touch of the keys and the piano returned the energy with some of the best jazz we'd ever heard.  He and Jack Six playing off one another and all of us in the audience were exhilarated.  Exhilarated and excited.

That's what I'll remember about Dave Brubeck.  A slender figure animated by the presence of a piano in a church in San Francisco.

Beaming from the applause.

Do me a favor - slap on Take Five or whatever Brubeck masterpiece moves you.  Turn the music up, take a drink, and salute the man who created music - red, hot and cool. 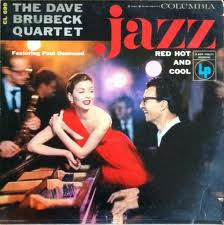