Up Against the Wall!


After Karen got the kids buckled up and after she started driving home, she heard Elizabeth say from the back seat, Well, I can ride my bike now.

-and then Elizabeth paused-


This was the day after our visit to the abandoned naval base on the other end of the island.  If you're going to learn to ride your bike, a desolate tarmac is the way to go.  5,000 feet long, 500 feet wide - of flat, empty concrete?  Nothing ahead of you--

We'd entered through a gate in the chain link fence that encloses the runway, the entry leading to the Naval Air Museum that's taken over the old Air Terminal at Alameda Point.  A handful of WWII era jeeps and trucks are parked in front of the Terminal, military echoes of former base glories.

Then there's the tarmac and its wide open spaces.

While Kristina bobbed and weaved on her scooter, Elizabeth rode straight.  Up the tarmac.  And down.  With Karen holding on, then me.  More Karen than me, sure.  Elizabeth prefers Mommy in high-stress situations, and learning to ride her bike qualified.

Don't you think about letting go, Elizabeth warned.  So while neither of us did, truth be told, by the end?  Karen was no longer holding the handlebar while she barely touched Elizabeth's back.

Up the tarmac.  And down.  Up and down.  Enough times that even Elizabeth knew she was getting it.  Had gotten it.  And her smile showed pride at her achievement. 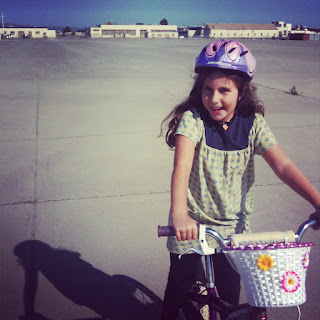 More than an hour had gone by.  What you can't see inside the flower-decorated basket attached to Elizabeth's bike are all the feathers that Kristina had collected.  Good-luck feathers, Kristina told us.  And she was certain that the Good-Luck Feathers had a lot to do with the success that came Elizabeth's way on Saturday.

Kristina had discovered that along the edge of the tarmac where concrete met water, right there is where weeds had sprouted through the concrete and that was good feather-hunting territory - with the feathers caught and tangled in those wind-blasted weeds. 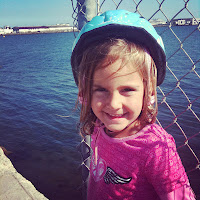 During that hour of feather discovery and increasingly confident bike riding, someone at the Museum had closed up shop, and after he closed up shop he'd locked the gate through which we'd entered﻿.

We'd had enough fun, too, and were at that point deciding how to get back to our car in the parking lot on the other side of the gate.

About then is when I saw a vehicle headed towards us from the opposite end of the runway.  As it approached, I could make out the lightbar attached to the top of the car.  So I thought it was a copcar at first, but as it got closer I realized it was too small for that.  And when it pulled up alongside, I saw the words Armada Security across the doors.

A little punky dude rolled his window down and asked me if I had authorization to be in the area.

I loved his choice of words.  It was like the punky dude was quoting bad dialogue from one of the many cop shows he watched way too often.

Authorization? I asked.  And what would that entail?

If you were a tenant or a contractor, he said.

At this point I'm kind of hating on the little punky dude.  I glance at my girls in their ridiculous helmets, one zooming by on her scooter, a pink blur, the other alongside her mom, walking towards me - my Elizabeth with a look of worry on her face as she stares at the tiny car the little punky dude is driving.  If my brother Dean and three of his big friends were here, they could pick it up by its bumpers and flip it over, crushing the yellow lightbar on top that the director of Armada Security decided gave the vehicle a sassy, official look.

Still studying my girls, I say, Does it look like I'm a contractor?

Sir, he says, all prissy-stiff.  If you're here without authorization, I'm going to have to ask you to leave.

The only thing - at this important juncture - that prevents me from going totally Greek is the fact that both of my daughters are close by.  But really?  Alameda?

You know what's really important in life?  Tone.  And this guy's tone?  Is just stupid.  How about, Gosh, I'm so sorry.  I can see you're here with your family but no one is supposed to be here.

How about, Gee, I can see that the girls are having a grand time, but this whole area is technically off-limits.  Sorry!

And Alameda?  What's the worry, just exactly?  Do you have a security concern?  Fearful that tricycle-roving bands of pre-adolescents are going to take over the base?  The base that you've proven entirely incapable of shepherding out of its Naval phase and into its next public iteration?

So you're going to bust my chops because my wife and I are teaching my daughter to ride her bike in the most ideal location for such an enterprise to go down?

But I don't say that.  Did I mention that the girls are right there?  Or that the little punky dude has rolled up his window and has beat himself a hasty retreat?  Maybe to get reinforcements.  Maybe there's a whole fleet of little gray cars with their stupid little lightbars on top, all screaming Armada Security on their stupid little doors.

Maybe he's off collecting them to mount a counterstrike on the two girls - one in a green floral print, the other in pink.  A counterstrike against the older one with the flowers on her bike basket as she learns to ride that freaking bike in the freaking city that she calls home.  Except - except!  These acres and acres of public space aren't actually home because some freaking bureaucrat in City Hall has decreed them off-limits.

Hey, freaking city bureaucrat?  Bite me.  You want to know why?  Because now Karen and I have to soothe Elizabeth.  We'd gone from I want to ride my bicycle to up against the wall! in the time it took Armada Security to show up.  Elizabeth?  She's certain the Police are going to come back and throw us all into the brig.

And if the response of the two girls doesn't describe their personalities perfectly, I don't know what does.

Elizabeth?  Elizabeth is crying.  Kristina?  She's just mad.  What a dumbo, she says.  Why didn't he unlock the gate so we could get to our car?

God, I love those kids.  Those oh so different, oh so wonderful kids.

Eventually, we get out.  We have to take the long way.  5,000 feet down the runway there's another open gate.  So we walk there and back again.

We'd driven both cars - one to transport the kids, the other to ferry the bike and scooter.  It's getting late in the afternoon by now, and we're supposed to be leaving for Los Gatos in less than an hour to see Connie and Gordon - but I'm so close to St. George's Spirits 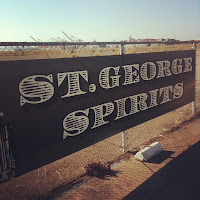 that I ask Karen if she thinks I have time to pop over while she takes the kids home.

I headed over, knowing that I didn't really have time, but more in need of a drink, or the promise of a drink, than I'd been in a while.  Little punky dudes scooting around in tiny little Armada Security toy cars will do that.

I pulled up to the hangar 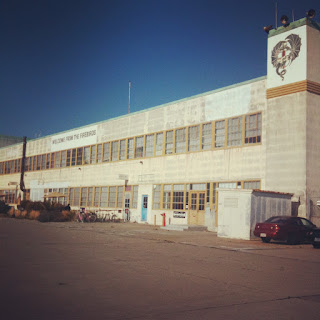 wondering if they had any Make Booze Not War bumper stickers that I could buy and then stick on the backs of, oh, I don't know...maybe an armada of Armada Security vehicles?

They didn't.  But they did have booze.  I quickly settled on a bottle of bourbon, because the bourbon that St. George distills is called Breaking and Entering.  There isn't a more aptly named bourbon that I could have gotten my hands on, anywhere, so I got my hands on one of those.

Also a three-pack of their Gins because I was thirsty.

By the time I got home, the girls had gotten baths and gotten dressed.  That Karen, she's a quick one.  Me?  I threw mixing gear into a travel bag:  cherries, bitters, shaker, flask of simple syrup - and of course, that fine bottle of Breaking and Entering Bourbon.  In case Connie and Gordon were interested in sharing an Old Fashioned before dinner.

The Old Fashioned?  I hoped it would drive all memories of the little punky dude far away.

﻿
Combine ingredients and shake until your shaker is frosted or until it's too cold to hold.  Pour over and enjoy - after you garnish with a Luxardo cherry.
Posted by Nicky P. at 11:43 AM