I'm infatuated with ice.  It was that trip to New York where Andy introduced me to my favorite bar - Booker and Dax.  And my favorite bar manager, Robby Nelson.  Robby steered me to the best cocktail I've ever had, their jenny & scott.  It's Yamazaki whiskey and two bitters and it's the best, did I say that?

Part of what made the drink sublime was the fact that they serve it on the rock.  Note the use of the singular 'rock' and not the plural 'rocks.'  That's because jenny & scott is served over the largest ice cube I'd encountered.  It fits in the rocks glass, and the whiskey and bitters fit in the rocks glass, but nothing else would.  Since then?  I've thought about that rock.  A lot.  I'm not proud of it.  Not proud that my woolgathering has veered towards that impenetrable ice queen, a woman I could never have, could never replicate.

But I could be woolgathering about worse things, right?  So that's my story.

Last night Tracy and I drove to Berkeley for a book-rep presentation at our sister store on Fourth Street.  The man on KGO indicated that the 80 was a traffic mess - but it only took us 15 minutes to get there from Alameda, so we had 45 minutes to kill.

Inside that store, and around the corner from the Halloween display - cookie pans shaped like witch's fingers, mummy spatulas and pumpkin-decorated kitchen towels - they had some bar items.  Whisky stones, stainless steel martini glasses, maple muddlers.

I wasn't looking for ice trays, but there they were.  Teflon trays to create 6 cubes, each cube 2 inches square - just like the rocks I enjoyed in New York.

Poets and novelists will tell you that smells are the most powerful triggers of memory.  I'm here to say that a black, Teflon ice-cube tray is a faster rocket than any Proustian madeleine has ever been.  Blastoff and I'm sitting in Booker and Dax with three other booksellers and two New York blondes as Robby sets a jenny & scott before me.

Splashdown and it's Jerry and I sitting in PDT after midnight, boozy from the Beam and Cokes at Doc Holliday's, and I swirl another cocktail glass, just marveling at the size of the rock it holds, a rock exactly like the one that saluted me at Booker and Dax.

New York bars and their rocks.

I (almost) forget that my coworker and I were in Berkeley to hear a trio of splendid book reps talk to us about the big books of the fall, so I snatch up that Teflon tray.  I also grab a glass flask from Italy that'll be perfect for the simple syrup I need to make for Randy - then I head to the register.


Now, though, now it's tonight.  Yestereve I washed the tray, filled it with hot water (so says Tracy) and thought all day about the ice that had formed, the ice that was just waiting for me.

When I got home from work, I was a bad dad.  The kids wanted to do Jungle-Gym Daddy, and I wouldn't play.  Selfish, selfish me. 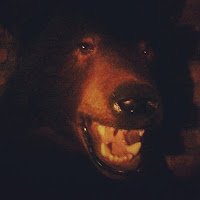 So we read books.  Scaredy-Cat Splat for Kristina.  Rapunzel, the One With All the Hair for Elizabeth.  And the PDT Cocktail Book for Daddy.  I consulted PDT because it's New York and that's where I wanted to be.  I wouldn't have the taxidermy bear looking down on me like it looked down from a PDT wall on me and Jerry there in the dark of the bar - but I could have one of their drinks.  And I wanted one of their drinks that called for a single rock, big, and the book practically fell open to page 149.  The Improved Whiskey Cocktail?  There on 149?  The recipe requires that it be served over one large cube.

The measurements have been modernized in the PDT Cocktail Book, but this drink was described by Jerry Thomas in the world's first cocktail guide, his Bon Vivant's Companion.  Remember?  It's why I started Drinks With Nick in the first place.  So, here she is. 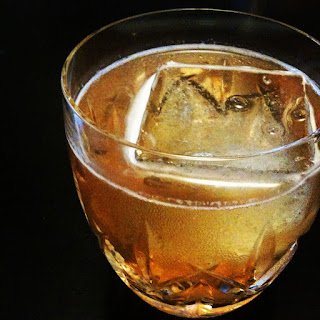