The Tequila Incident, or the Red Rocker does San Francisco 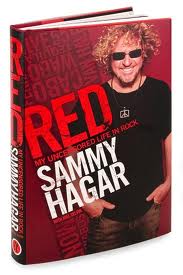 Hey, he says, and he holds up a copy of Red, My Uncensored Life in Rock, by Sammy Hagar.
Hey, Mr. Claw says again, and he holds the book out to Mr. 55.  You left this on the table.
Right then I’m feeling pretty stupid, but Rich calls my name, asks how the line is going while Mr. Hagar’s associate heads back, and when I turn around my guy is already gone, gone and out the door.
Rich, I yell back.  I’m going outside, ok?
He gives me a thumbs-up and I run outside.  My guy?  He’s got a sweet parking spot just across the street.  Even that's possible in the Marina if you arrive early enough.  I dodge an Accord and head over, get to his Firebird as he’s unlocking its door.
Hey, I call out, and he looks up.
I wanted to say I’m sorry.  To apologize.  That I didn’t mean—
My guy just smiles.  Dude, he says, it’s cool.  The Firebird is open now and he tosses his signed book inside.  It’s cool, he repeats.  Then he throws his hands into the air, he does that horn-thing with both of them, just like the Red Rocker did before he yelled, Let’s do this!
My guy?  My guy yells, too.  The Red Rocker, man – I met the Red Rocker!  And he yells again, somewhere between a war cry and the mating call of, I don’t know, a musk ox.  A really nice musk ox.
It’s cool, dude, it’s cool!  No harm no foul!
And he gets in his Firebird and sends me a thumbs-up just like Rich did.
When I get back to the store, Mr. Hagar is high-fiving customers as he leaves.  Those still in the store cheer – their cheers are met by the cheers of the hangers-on outside.  Before the cheers end the Red Rocker is back in his limo and gone.  Where do rock stars go early on a Friday night in San Francisco?
That’s a question I’ll never be able to answer.
I look at my watch.  It’s 7:14.
Rich, I ask, and Rich has anticipated all of us.  He’s at the register checking the numbers.

285, he says.  285.
You sold 285 books? I ask.
And he signed every last one of them, he says.  In fourteen minutes.  Rich smiles and shakes his head.  In fourteen minutes.
It’s later.  We've returned the store to some semblance of its usual self.  The tape's been pulled off the carpet.  The chalk on the sidewalk is a little scuffed, but still readable.  After Tom & Gayle!
Rich and I head around the corner to a Pierce Street watering hole.  I don’t drink tequila, not regularly - I had a bad tequila incident once.  Hasn't everyone?  But Mr. Hagar owns his own distillery, so I order tequila for me, whiskey for Rich.  I tell him about my guy, and my mistake.  Rich just drinks, and laughs.
It’s cool, dude.  It’s cool, he says.   And he laughs again.
We clink glasses and sip.
No harm, dude, no foul.
Posted by Nicky P. at 12:24 PM