Momofuku Ando was a Japanese businessman who invented the Ramen noodle.  True story.  And the great New York restaurant, momofuku?  When David Chang opened it, many of his crazywonderful concoctions centered around that noodle - so that's where he found inspiration for the restaurant's name (that and the fact that it sounds a little bit like mutha$&@*#!  Another true story).  But then Mr. Chang went all DEFCON 1, took that beauty of a eatery to maximum readiness, and the rest is now an ongoing chapter in the book of Sweet Science.

When we arrived in New York with the rest of the Books Inc. crew, all that Andy knew was that a friend of his managed a bar in the city.  I'm game for bars, and we'd already hit a few, so we had of course decided that we'd check out the joint his friend ran. 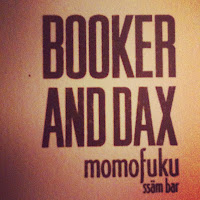 Turns out the joint was Booker and Dax, the bar attached to momofuku ssäm.  This iteration of momofuku?  It's been named one of the 50 best restaurants in the world three years running.

Not a bad joint Andy's friend was associated with.

Andy texts Robby, let's him know we're headed over - 'we' being Andy, me, Jerry and Korje.  A more motley crew of booksellers would be hard to find - unless Book Expo America were taking place in the center of the known universe. 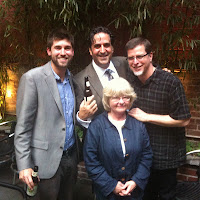 So we head over to East 13th, and being from San Francisco, we can't find it.  Until we do.  And when we open the door, I'm reminded that some of the greatest places in New York are small.  There are a couple other tables, but what you see is what you get - one six-top table there in the middle, a couple others off to the sides.

And when we walked in?  Four of the six seats you see at that table?  They had been set aside for us - white napkins at each seat proclaiming, Taken.  As soon as we enter, Robby comes out from behind the bar and gives Andy a hug and shows us to our seats - and the two New York blondes already sitting at the table are checking us out, trying to figure how we rate such treatment.

Robby continues with the the gracious-host thing, and he doesn't steer us wrong inside his beautiful bar - this bar with fire on the walls and fire behind the counter. 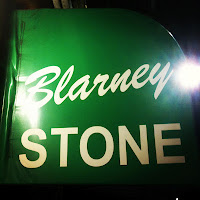 I think there are about a dozen Blarney Stones in Midtown, and I hit them all.  Some twice.  This one was on 9th at West 29th.  Andy had mentioned gin earlier in the evening, and it had sloshed around in my head ever since, so when we sat, I ordered a Martini.

Ok, hon, the bartender says. You can have a Martini - it's like only the second one I've made here - but you can't have olives. Only a twist. This is the freakin Blarney Stone, a'right?

Except for that Blarney, a Manhattan always started me off.  So I do that, order it from one of the three drinks listed under stirred - the others were lady of the night and laurel and hardy.

Robby's laughing when he brings the Manhattan.  Brings one to Jerry, one to me.  He asks if we'd like to know how they cool the glass that the Manhattan is served in. 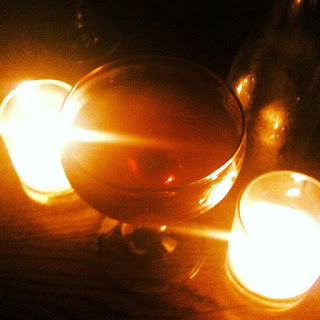 Which would explain the huge tank of the stuff right outside the front door.

It's true, then.  Dave Arnold - in collaboration with David Chang - has in fact brought science to the bar.  And in doing so, has raised that bar wonderfully.

The Manhattan is perfect.  Cold - thank your, Mr. Nitrogen - with the ideal balance between the rye, vermouth, and bitters.  I can get my balance off at home - but I only play a bartender on tv.  Robby and his crew are the real dealers.

Next up might be my favorite drink of the night, something they call the jenny & scott.  We're talking Yamazaki whisky that is - in the parlance of the bar - served on the rock.  They say rock, singular, because the rock in question is at least two inches square.

This?  This is a thing of beauty.  What sends the jenny & scott over the top?  The bitters mixed with the whisky - both mole and hellfire.  It's difficult to explain how exquisite the concoction is.  The mole bitters add a touch of earthy chocolate.  But the hellfire bitters?  Oh, lord.  The spicy habanero doesn't overpower the drink - it just magically adds heat.

Order jenny & scott if you're in the city.  Really.

The evening begins to haze just a bit around now, but it's a sure bet I next went with the sure bet because one of its ingredients, the lavender, reminded me of one of my favorite cocktails, the Aviation.  And I'm thinking about the Aviation because I just that day ran into a friend on the floor of the Javits Center.  Amber - another Aviation fan - this one's for you.

What's crème de mure? I ask Robby as he's walking by (that night, Robby was wearing many different hats and excelling under the brim of each).

He begins to explain but then stops and instead grabs a bottle from behind the bar and pours a finger of richly purple heaven into a glass.  It's easier to taste, Robby says.

Crème de mure would then be a blackberry liqueur.  That and the rum and the lavender and almond make up the sure bet, and the sure bet is listed under the shaken portion of the drinks menu because you have to shake things up when you're dealing with egg whites.  It's served in a champagne flute, so it's a tall column of cool lavender cotton.

A sure bet?  Indeed.  One of the two New York Blondes sitting next to us oohs over the drink and asks if she can sip.  Everyone wants to sip, so she does and we do.  Wow, she says.  And her friend says, So who are you all anyway?  You walk in, the table's waiting, that guy - and she pouts over at Andy - gets a big hug.  What gives?

I thought New Yorkers were supposed to be cranky?

Robby stops by - the lights are even lower now that the sun has long since shuffled off its daily coil - and he wants to know how we're doing.

I have room for one more, I say, and I ask what he'd recommend.

Well, he says...one of our most popular drinks is the mustachi-ode.  It's going to be leaving the menu soon only because we like to keep things fresh.  It's got this pistachio syrup that we make ourselves.  I'd go with that.

When Erik Ellestad at the Savoy Stomp tweeted Booker and Dax for the recipe, he got this response:

So go on and centrifuge your own pistachio syrup and then recreate the mustachi-ode.

About now, as we're bidding goodbye to the New York Blondes - Robby shows up with my cocktail.  He places it on the table with a flourish.


Nick, Robby says.  Please enjoy the final mustachi-ode to be served at Booker and Dax.  We used the very last of our pistachio syrup to make yours.  Cheers!

I do enjoy my drink.  How could I not?  It's brilliant.  And I'm happy the evening here is ending with bourbon - I need energy for the rest of the night, after we drop Korje at the Larchmont and head back up towards Penn Station and our hotel.  Probably not headed to the hotel, not just yet.  Still.

Andy's picking up the tab, and while I try to throw money at him, all I can think is - bourbon and friends, old and new.  The beginning of a week in New York where books and more drinks await.