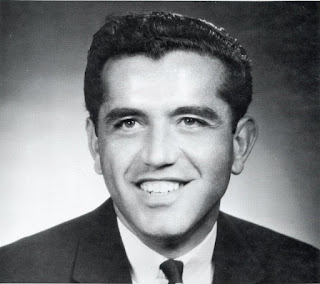 As my cousin lay dying, we talked.  We talked a lot about his life.  About his childhood in Hiawatha, Utah, his early years there with my dad.  About moving to Modesto when he was nine.  About his sister, Grace, and his brother, Chris.

And as my cousin Manuel told this story, he started laughing, laughing at the twin memories - the first, where he had envisioned himself as an accountant, and the second, the memory of this music teacher expressing the strong and salty opinion that Manuel's life would of course center around music.

And it was these many years later, as my cousin lay dying, that he laughed at the memories.  Still able, even under the cancerous circumstances that led him to Memorial Medical Center in Modesto, still able to laugh.

My cousin Manuel - Manoli to me, always - played such an important part in my life.  If that life has a soundtrack, Manoli is the singer.  His voice - that huge baritone - was present at so many significant occasions.  When Karen and I got married in Modesto, in 1990, he sang us down the aisle the same way he sang my parents down the aisle at the old Greek church in Stockton in 1962.  When Elizabeth was baptized, and then Kristina?  His was the voice in the choir loft - singing, rejoicing.  Sang for my brother, George, and his wife, Karna - for my brother Dean, and his wife Laura.  So many happy ceremonies, so much singing.

Of course, Manoli was there for the more somber moments, too.  When my father died, Manoli sang him to his rest.

Manoli sang so many to their rest - his parents, his siblings.  All eight of the original Katsufrakis clan, my Yia Yia Elizabeth among them.  Manoli's mom - my Yia Yia's older sister.  Thea Helen the matriarch of the Katusfrakis kids.  Those eight pillars who are such an important part of my history, who still cavort in my head if I close my eyes.  Drinking Metaxa, turning a lamb on a spit.  Yelling, dancing, singing.  So much singing.

As my cousin lay dying, he joked - I worry I won't have the backbone or the bravery to face that final journey the way Manoli did - because as he lay dying, he laughed and wondered who was going to sing him to his rest.

The words we sing - the words Manoli sang so often for so many - are simple:

Eternal be, his memory.

But the words carry such great meaning - and so Manoli wondered aloud who would sing for him.  He said that Father Jon - who for so many years at so many of those celebrations and commemorations has had his beautiful voice complimented by Manoli's beautiful voice - Father Jon said he'd record Manoli and put a cassette player in Manoli's casket to cue up when necessary.  And as Manoli tells me this story, he's laughing with that great laugh of his, the laugh somehow always lighter and more playful than I expect. 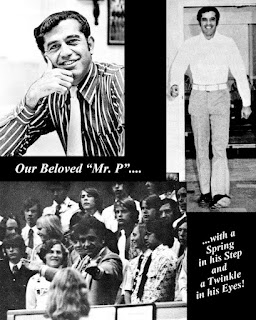 During that visit at the hospital, Manoli spent a lot of time talking about his teaching years, years that were relatively unknown to me.  I was a kid for most of them.  But my cousin sparkled when he talked about those days, especially about Peterson High in Sunnyvale.  His emotion was reciprocated after news of the severity of his illness began to spread.

First, some former students set up a Fan Page on Facebook (where I stole the pictures you see here).

Then, in early January, more than 100 of them traveled to Modesto to sing.  For him.  Traveled from up and down California, from Utah, to remind him of the incredible impact he had on their lives.  How, because of his music, his teaching, they'd always remember Mr. P.

And finally, these students who had traveled for him - then sang for him.  So he sang right back.


The next time I saw my cousin, the last time I saw my cousin, he was recuperating at a rehabilitation facility in Modesto.  They'd tried to class up the joint with dark wood paneling, and it of course was exactly what the doctor ordered, but there was no hiding the fact that it was a Dying Place.  It's there right at the end of Granger Avenue - near the apartment where my cousin lived with his mom for so many years after he retired from teaching.  Near the apartment where his mom, my Thea Helen, spent her last days in a hospital bed they'd set up in the front room.  So it was Granger again - a Patterakis again dealing with the dying of the light.

That last visit was a softer one - Manoli's voice not silenced, but quieted by the cancer.  There was less laughter, too - though still some.  God bless you for that, Manoli.  Bless you for that.

I had told him, I had said that if I could sing, I'd sing for him.  My brother Dean chimed in that Manoli definitely didn't want to undergo that.  Manoli laughed, though.  Manoli laughed.  Manoli laughed and said he would - of course he'd enjoy hearing me sing.

That's about when my Mom walked in.  I told her we'd been having a good visit.  A lot of that was just me reminding Manoli how much I loved him, how much the girls and Karen loved him, how important a role he'd played in all those momentous occasions in our lives.  And I told Mom how Manoli had laughed and said he'd be happy to hear me sing.

Mom recognized the foolishness of that idea and so she leaned in close and asked Manoli if he'd like to sing with her.

Manoli was quiet for a moment before he said, No.  No, Anna, he said, his voice so quiet - the strain of speaking those few words so evident.  But I'd like to hear you sing.

And so she did.

My mom sang a Greek song that she'd sung to my a dad a lot as he, like Manoli, lay dying.  Mom's voice is so pure, so clean - and as she sang, Manoli closed his eyes and smiled, smiled to the beauty of her voice.  The song is simple - a bird who's alone is urged to sing, and through the singing other birds will join in, and so the bird that was alone won't be any longer, will always have company through the magic of song. 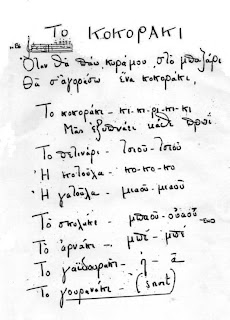 I'm crying at this point.  I cried a lot during that last visit, and I was certainly crying then, listening to Mom sing for Manoli, watching him smile at the sound.  Because it made me acknowledge that even though I can't sing, I will - when we gather for Manoli's funeral.

As Mom finished, when she straightened and wiped the tears from her eyes, when she turned to me to ask after the kids - we were all surprised to hear singing - quiet, beautiful singing.  Surprised to hear Manoli - singing.  Manoli with barely the breath to whisper responses as we visited - and yet, and then - reminded I think by the joy in my mom's voice, he sang.

It was a silly song.   A Greek song.  To Kokoraki.  Just a silly, Greek children's song.  Like Old MacDonald, with a different animal sound added to each verse, starting with to kokoraki - a cockerel, a young rooster.  But it made me draw closer to Manoli, still with his eyes closed, as the words came out - to kokoraki ki-ki-ri-ki-ki - as he sang the song.  I'd heard Manoli sing stronger so many times in my life, but this time?  With the words scarcely escaping his lips?  So soft?  Yet sung with such delight?

I have no idea how awful the pain, how terrible his discomfort - but as Manoli sang, he smiled.  As Manoli smiled and sang - I knew he wasn't in that little room overlooking a courtyard in a Central Valley rehab facility.

I don't know if he was in Hiawatha, a Sunnyvale cafeteria, maybe a choir loft in Stockton or Modesto.  But I do know for that moment, as he sang, as he'd sung so often before, Manoli was happy.  Happy because he was doing - even there at the very end - one of the things he'd always done best.