Today is World Whisky Day, and in its honor, I thumbed through Ian Buxton's 101 Whiskies to Try Before You Die.  His choices go from the readily available and relatively cheap Cutty Sark-- 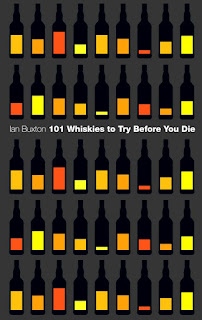 (before the whiskey boom in the States, Cutty Sark continued to be one of the most popular brands here - probably because it had remained available even during Prohibition if you knew the right people.  And how could the right people still get Cutty?  Why, through the efforts of master Bootlegger William McCoy.  Unlike some [most!] bootleggers who were responsible for, as one wag said, replacing good beer with bad gin, William McCoy skimmed the high seas in fast boats and was known for only supplying his customers with the best booze available.  That's why his efforts were deemed "the real McCoy," and the real McCoy was often Cutty Sark)

--and the Cutty, nowadays, shouldn't run you more than twenty dollars.

On the other end of the spectrum is the 40-year-old version of Highland Park (#57 out of Ian's 101).  It comes in a box with a precious little leather bound book - and it ought to because it will set you back ₤800.  (Buxton's prices are all in pounds because the good Ian is a Scot and his effort was printed by Hachette Scotland and not reprinted here - they just sent us what they had.)  ₤800 is roughly $1,300.  So his 101 Whiskies span the globe, yes - and also your wallet.

I wanted to try something tallied in the book - preferably, since we're talking about WORLD Whisky Day, something not from the U.S.  And it had to be something I already own because I'm trying to drink what I have before buying more.  Trying.  Not always successful, but trying. 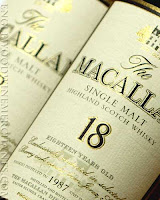 Ian lists Buffalo Trace (#22), but I've had it and it's from Kentucky.  #27 is a Chivas, and that would've been great, in honor of my dad - an old Chivas man - but Ian had listed the 25-year-old, and that was not in Mother Hubbard's Cupboard.  I was also out of Cutty Sark (#30) and Knob Creek (#63) and was beginning to worry that I didn't have anything on hand that came from across the pond when I turned the page to #90.  The Macallan.

I'm embarrassed to say that just such a beast lay unopened in the back of my booze cabinet.  After my father died, and after my brothers and I came across bottle after bottle of the good stuff that he had owned - but saved - I had promised that I wasn't going to squirrel away good booze for special occasions.  Instead, I was going to drink the good booze with good friends.  Drink it and enjoy it.  But there stood the Macallan, unopened and waiting.

I don't even remember where I bought it.  I'll blame it on John at the Marina Deli.  One of his vendors may have had a few bottles that had dropped off the back of a truck that he wanted to sell on the cheap.  Whatever the case, I had it so I opened it.

In the bottle, the whiskey is lovely - it's colored deep and rich, like caramel.  I held it up, reading the tag tied to its neck.

As I read, the embers from the fire we had enjoyed earlier were still snapping, shooting sparks.  The girls are asleep upstairs, tired from dancing to Prince - let's go crazy! - while daddy built the fire.

I removed the lead foil surrounding the Macallan's cork.  The sound a cork makes?  When you pop it off a bottle of 18-year-old whisky for the first time?  It's beautiful. 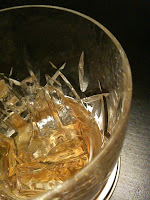 So I poured the Macallan into crystal, over ice, and swirled - held it up in front of our warm, dying fire.  The scent coming out of that glass?  Powerful.  This is not an unobtrusive drink.  But then I sipped.  I'm not very good at telling you that I could detect leather or marmalade, but I can tell you that it's a little bit smoky and unbelievably fine.  Is that good enough?

I took another sip and thought about my dad.  My kids and Karen.  My mom in Modesto.  My family and friends that I'd like to share this with.  Randy, where are you?  Nick?  Harry?  Brad, are you home?

Next time, gentlemen.  Just ask and I'll share.  For now, I sip again and salute Captain William McCoy, that fine seaman who did his best to keep the best in American glasses.