I mean, I should get out there, because if this book is any gauge, they take their drinking very seriously in Minneapolis-St. Paul.

Northstar Cocktails is also my favoite book because Johnny Michaels is an opinionated bastard - in the very best possible way - and he could care less what you think if you had the nerve to stand between him and the creation of a new drink.

Pretend you're a cranky old sot.  Pretend you write a letter to the Times - or the Gazette or Inquirer or the Daily Mail - and pretend your letter derides bartenders who don't make cocktails the way God intended.  Pretend you write:  I don't want some lawyer from Philadelphia putting fruit in my Old Fashioned!  Whiskey, sugar and bitters only!

You know what Johnny Michaels will do if he reads that letter?  Of course you know.  He'll create a drink called The Lawyer From Philadelphia.  It's a "pink, bourbon based cocktail, which is served in a white wine glass and garnished with a pansy rested atop a floating lemon wheel."

And if that ain't thumbing your nose at the legion of purists who like it the way they like it - I don't know what is.  C'mon, a pansy?  That's inspired.

So, Mr. Michaels has opinions.  He's serious about being the "steward of people's good times."  He's comfortable quoting the Good Book:  "Make thy neighbor's drink as you would have thy neighbor make a drink for you."  And the proceeds from the sale of his book go to the Society for the Prevention of Cruelty to Animals International.  In fact, all events hosted by the North Star Bartender's Guild are charity based.

I want to be an honorary member of the Guild.

You know, for kicks.

The reason why I may never make myself a Handsome Devil?  It's the recipe, darling.  Most any cocktail book will have the occasional concoction that has an ingredient that has either not been available in twenty years or that calls for the home Maker of Drinks to labor for hours over an ingredient that you'll use once.

This book?  Johnny Michael's and the Guild's book?  It's got one of those recipes on every other page - and that's another reason why I love it so much.  Any group of people that follows their bliss down byways that call for the addition of Habanero-Butterscotch Syrup or Coriander Tincture to make the perfect cocktail - these are my people!

And so, I'd have one of them mix me up a Handsome Devil.  It calls for Jim Beam Black bourbon, an orange slice, a skewered brandied cherry and a blanched hazelnut.  But it ain't the hazelnut that will make you sweat.  It's the need for a 1/2 ounce of Devil Mix.  You want to make the Devil Mix for me?  And remember, this isn't the drink, this is just half an ounce of beauty you're adding to the drink.  Here goes:

Mix and store in an eyedropper bottle.

Add ingredients to a Mason jar and let sit 5 to 7 days, shaking once or twice a day.  Strain through a fine mesh strainer and store in a sealed glass jar.

Add two ounces of the Black bourbon to 1/2 ounce of the Devil Mix in a rocks glass.  Insert orange slice like a mohawk, so that the top of the peel is sticking out.  Insert skewered cherry and drop hazelnut in drink.

That, my friends, is one serious drink.

I wimped out.  My first try at making one of the Guild's drinks was

I Will Not Remember the Maine 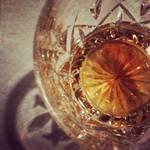 Yes, it does call for equal parts rye and gin.  You know what?  It works.﻿

So then, feeling emboldened, and because I had all the ingredients on hand, I went for the 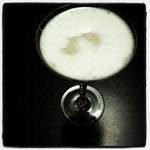 Bring water to a boil and then remove from heat.  Steep tea 5 minutes, squeeze bags, and discard.  Whisk in sugar and let cool.  Will keep refrigerated for 1 month.

Shake all ingredients, except absinthe, without ice.  Shake again with ice and strain into coupe and sidecar.  Top with absinthe.


Did Karen wonder, out loud, why I was brewing green tea at ten o'clock at night?  Sure.  Did the absinthe, the last ingredient added to the cocktail, drop deliciously through the froth created by the egg white and add a hint of licorice to the gin and sweet tea?  Did the absinthe also give the drink its name, Van Gogh's green fairy being reincarnated as St. George's absinthe?  Bringing the drink and the Guild and yours truly full circle?  Since the drink originated in Johnny Michael's twin cities but needed to use that special last ingredient, the St. George absinthe - the St. George that is distilled less than six miles from my house, the house and the distillery both calling Alameda home?

The only trouble was, by the time the drink was ready, Karen had long since called it a night.  Way to late to call Edward - the friend who had tipped me off to the book.  Thanks, Edward!

And so I sat alone in our then messy front room, sipped happy, and put the drink down on the end table without noticing that Kristina had earlier hauled out a little pal, and that the pal - with his nose so bright - clearly wanted a sip, too.

I figured it was okay because I didn't think he'd be guiding any sleighs in April. 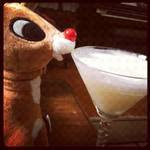 The important thing?  Now I've got an old pickle jar full of green-tea infused simple syrup, so if you're in the mood for a Green Fairy, just stop on by.  I really want to make this drink more than once.
Posted by Nicky P. at 3:00 AM