The Problem with Memories of Elvis

Memory is complicated.  Its complexity takes root at the moment it's conceived - which of course is immediately after any memory's precipitating event.

You're no longer reading that last sentence - all you have is the memory of having read it, unless you read it again to see if what you remember jibes with what was written. 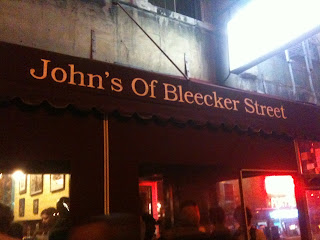 Because we all react differently to similar experiences - we sip the same drink and suddenly I'm eating pizza in New York while you're shaking your head at the memory of one-too-many in Bakersfield; or we hear Elvis sing That's All Right, and you've never heard it before whereas - for me?  It's Modesto, again.  It's 1977, again.  I'm headed, again, across the street to break the news to Kevin - the King is dead.

So because we all react differently to the same stimulus, there's no such thing as collective memory.  When we ask, Where Were You When The Towers Fell? we think we're tapping into common ground - when the only thing we share is whether or not we were both conscious at a particular period of time.  Everything else is a cat fight - yowls and claws and fur-tufts flying.

A good friend of mine from high-school - we remember at least two things differently.  First, we'd pledged, when he was 18 and I was 17, that if we ever had children, we'd be the one to tell the truth.  If the kid looked like a monkey, we wouldn't be one of those conforming friends who oohed and ahhed over the ugly thing.  We'd be the one to set the other straight.

I have no idea why teenage boys would make such an agreement.  All I can tell you is, we did.

Actually, I can tell you more.  I can tell you that when he had his first-born, a son, and called to tell me the news, I can say that when I asked, So, our oath still holds, right? my question was met with silence.

I don't know what you're talking about, he finally said.

The monkey-thing, I said.  I get to tell you the truth, remember?

Nor did he remember our agreement - when I called to say that I just got the phone number for an outfit that did cheap Tandem Jumps.  See, we'd promised that when we could afford it, we'd jump out of a plane.  So then, still in our twenties, still kind of unaffordable - I found a company that did it for less than fifty bucks.

Don't ask why I thought skydiving-on-the-cheap was a good idea.  It didn't matter anyway, because my vivid remembrance of our pinky-promise didn't conform to any of my friend's recollections. 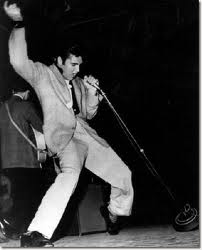 Both of these, of course, can be explained away by, in the first case, pride, and just good sense in the second.  But Elvis?  Elvis was something else to Kevin.

There was no bigger fan.  Me?  I liked the King, but Kevin?  Kevin adored the hip-swinger from Tupelo.  So when that August day in 1977 came around, and I heard the news - I ran out of my house on Sherwood Avenue, crossed over to Birchwood, and knocked on Kevin's door.  He answered, crying.

Of all my memories of Kevin, that's the strongest.  How old were you, Kevin?  10?

Kevin and I lost touch - school, jobs, family - years passed, but then that Facebook thing happened, and one day I received a message from Kevin.  Kevin?  The first thing that came to mind was Elvis.  And then the neighbor who'd converted one of his bedrooms into an aviary.  Then me babysitting Kevin and little Joey.  What were his parent's thinking?  Memory memory memory.

When I responded to Kevin's message, I signed off with - Do you still listen to the King?

Kevin replied that he'd forgotten how much he liked Elvis Presley.  That when friends - just a few months previously - were going to take the three-hour trip from his place in Arkansas and visit Graceland, he had no interest.

Memory is complicated.  And the truths we hold to be self-evident - if they rely on recall, on remembrance - well, the truth may be out there, it just may not be what you think.

One of the reasons I'm endeavoring to get the words down is to pin my thoughts down, too.  My judgments, sometimes, as close to the incident as possible.  Because as soon as memory takes hold - what's True can change.  What's Real may begin a metamorphosis - and suddenly you're not an Elvis fan anymore, and a detour to Graceland doesn't even occur to you, because, well - why would it? 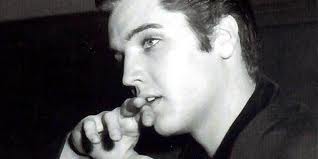 Anyway.  That's what happens when it's the King's birthday and you're reminded of your good friend Kevin.  Thanks for the memories, Kevin, and happy birthday, Elvis. Happy birthday.