I'm thinking it was 2002.  Karen traveled a lot that year - making it easy, say, on a Sunday night, if she wasn't home, to head to Delaney's after work before driving back across a couple bridges to an empty house in Alameda.

For a nightcap.  Or two.

That night, Paulina was pouring.  She'd just introduced me to Oban, back when, if I was consuming an adult beverage, it was Scotch whisky - almost exclusively.  Before my conversion to good American spirits.  To bourbon, to rye. 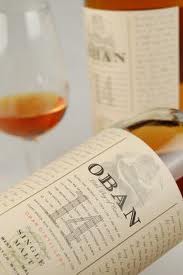 Oban's a delight.  Not super-smokey.  Not too sweet.  It really dances on the tongue.  If you haven't tried it, do.  Paulina shared the 14-year-old with me that night.  She knew another bartender, somewhere South of Market, a bartender who was letting flow with Oban's Manager's Choice.  Apparently they even introduced a 32-year-old that year - but that sweet dame would've set you back a grand.  So for Paulina's purposes?  The 14 was plenty good.

Late on a Sunday could be slow at Delaney's.  Slow there in the dark.  Brass fixtures barely glowing in the dim light.  All the Young Dudes playing on the jukebox.  I sat at the end of the long, shellacked bar, at the end nearest the windows.  The windows were closed because the fog was coming in off the bay that night.  There were just a few of us inside, drinking.  Paulina keeping some regulars happy - and introducing me to that wee, fine whisky.

We weren't talking about anything - you know how you do in a bar.  Maybe some baseball.  The Giants were on their way to the World Series - but of that, we shall not speak.

At some point, a guy horned into the bar, horned into our conversation.  We were awfully accommodating, I thought.  Even though the guy was a goof, we all acted nice.  Paulina may have been grumpy - but she did that a lot just to test you, to see if you could hack it or not.  Pretty bartenders can get away with that. 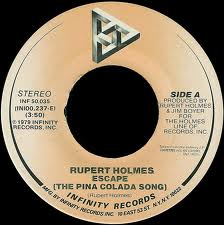 Now it's Rupert Holmes coming out of the juke, and with this guy wanting to talk with us, the conversation starts to lag.  More Rupert, less talk.  Which is saying something.

I don't know - have you been there?  In a quiet bar?  Just talking with some people you know?  Not friends or anything - just a few guys you see around the neighborhood.

I miss that about living in San Francisco.   We don't have a neighborhood bar in Alameda.  I mean, do I want one of those black satin jackets from the Lemon Tree Lounge?  Hell yes.  But they don't know me there.


The reason Cheers was such a great show is because sometimes you do want to go where everybody knows your name.


So anyway - you've been there, right?  Sitting in your quiet bar, looking at the people in the cold outside, while they look at you, cozy inside?  Those people, hands in their pockets for warmth, captured in the green neon of the light spelling out Delaney's, the green neon above the windows?  Those people decide - nah, not enough happening here.  They head off.  Heck, they're thinking, maybe the Paragon's still open.

In your bar, only a few of the tables have a few drinkers, and you're just talking with those couple other guys.  Two bartenders who've already closed down their joints because it's a quiet Sunday in the Marina.  And here's this goof of a guy who wants to talk to all of you?  Maybe his shirt is a little too starched.  His hair a little too short.  He's trying to ingratiate himself with a lot of fake camaraderie bullshit.  But you let it happen, what are you going to do?


I mean, sure, maybe you're not jumping to answer his gambits.  But you do, eventually.  Until he gets the hint.  He gets the hint, eventually, and stands up to go.  He offers to buy the round that everyone's drinking, but Jesus, you can't let that happen.  You don't want him getting the wrong idea.  It hasn't exactly been fun, trying to accommodate this guy, letting this unknown guy wheedle his way inside the smarmy little cocoon you've all spun on this cold, wet, quiet Sunday night.


By this time, it's Neil Diamond on the juke.  Girl, You'll be a Woman Soon.  A good song.  A song you just want to listen to for a minute without having to come up with some fake chitchat to send the guy out the door.  But go he eventually does, thanking you all with a wave, and as soon as he steps outside - finally, finally - the group of you let out a laugh.  Just you, and Paulina behind the bar filling up a glass she holds at an angle, filling that angled glass nice and slow with some Anchor Steam for one of the tables - just you, Paulina, and the two bartenders sitting there on their round stools.  You all just laugh, what the heck was that about?


But you stop laughing when Paulina catches your eye, and you notice two things fast:  number one, she's not laughing, and she should be.  She hates Dobie Gray and now he's on the juke singing Drift Away--


--so she should be laughing at that.  But she's not.  And number two?  Number two is she's indicating with a couple slight head-tilts that you should look behind you, at the door.

And you do, and when you do, you see - standing in the doorway - the goof.  He's running a hand through his too-short hair, kinda squaring back his shoulders like he's going to talk.

And then he does.

Know what the saddest sound is? he says.

All of a sudden, you and the jerks that you're drinking with are looking everywhere but at him.  Trying to focus on the bottles of whisky against the mirrored wall behind the bar.  Maybe at the table in the back, the table with the young couple waiting on the fresh-poured Anchor.  Yeah, you and the jerks are hoping that this man in the doorway is speaking to them.  But of course that ain't happening.  He's speaking to you.  Just you.

The saddest sound, he says, is laughter that a guy hears coming from a bar.  The guy?  He's not the best looking guy - sure, he knows that.  He's got an ok job, though - right in the heart of downtown.  But even though he's been working there for a while, he hasn't made any friends.  So when this guy leaves a bar after spending time with some new people, he thinks - he hopes - that the half hour pleased them as much as it pleased him.  But then, he hears laughter?  Coming from that bar, right as he left?  That laughter's the saddest sound because it lets him know how ridiculous his idea was - the idea that he'd finally met some people who had enjoyed his company.


And then he was gone.  Just gone into the dark of Chestnut Street.  And when no one says anything, it's Paulina who finally breaks the silence with the question, One last round?


And you're left there thinking, One last round?  Or call it a night?  You and all the other jerks in the world.
Posted by Nicky P. at 4:26 AM